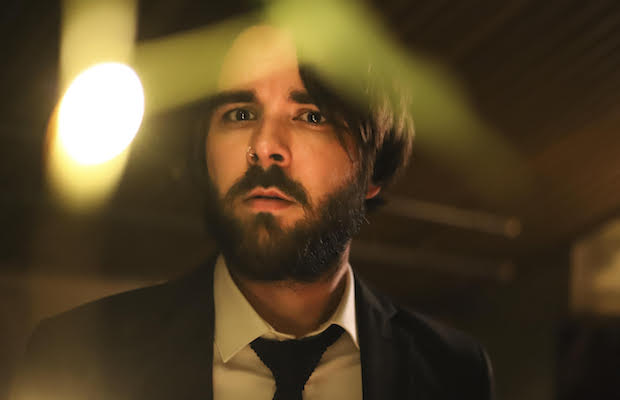 Last fall, we introduced you to I&R, the new local musical collective helmed by the creative vision of multi-faceted artist Josh Cournoyer, who made a strong debut with an earnest, surf-tinged anthem called “Addendum.” In the months since, I&R has unveiled a couple more singles- “Venice” and “Silhouette”- providing a glimpse of the broad and ambitious range of sonic influence and personal subject matter explored on the project’s forthcoming debut LP, Bankrupt City. Officially slated to arrive tomorrow, July 12, we’re incredibly thrill to bring you an exclusive early premiere of I&R’s first full-length, sure to be one of the year’s best local records, which you can stream right now below!

Hailing originally from Providence, RI, Cournoyer left his tight-knight musical community for a fresh start in Nashville back in 2014, but it wasn’t until more recently, after years of playing guitar in other projects, that he felt compelled to create his own music once more. Prompted by the political unrest of the past few years, combined with his own struggles with anxiety and panic attacks, what started as a collection of songs in Cournoyer’s Inglewood home has since morphed into more of an evolving, musical collective as I&R, with Josh’s work rounded out by a revolving door of friends and other Nashville musicians, each adding their own unique touches to his songs.

“Bankrupt City was my first experience recording a full length in Nashville,” Josh tells us, “Operating without a band I had to learn how to ask for help, once I was able to do that everything changed.  There’s nothing quite like making records with your friends, the process was also the most collaborative creative experience I’ve ever had.”

As Cournoyer elaborated last fall, on I&R’s inception and unique lineup,“At a certain point the deepest sense of peace is that there’s nothing static in this world.  I&R is meant to be an intentional revolving door of songwriting themes, even the lineup of musicians is meant to shift.  Instead of fighting to keep a band together or to create a defining sound, I look forward to embracing that what we’re capturing is here in this moment and gone the next.  It’s going to be a series of musical time capsules, each song mirroring back who was in the room on a given day, what record touched an emotional nerve the night before, and what experience is being lived through at that moment.”

On the record’s personal scope in thematic self-reflection, Cournoyer adds, “I wanted to get into the weeds with these songs, two of the big focal points on the record are laying out my journey with mental health and how I’m reconciling with not always being 100% or that 100% isn’t a very realistic aspiration in the first place.  I also spent time putting words and melodies what it was like to step back from the religious community I grew up in, how that’s impacted different aspects of my life and world view.”

Produced by Mike Poorman (Hot Rod Circuit) and Joe Pisapia (Ben Folds, Guster), and engineered by Logan Matheny (Chuck Berry, Bermuda Triangle), Bankrupt City was inspired by observations of societal inequality and immersing in a city that will pave over sacred cultural spaces in favor of sterile tourist traps. The LP features contributions from Arun Bali (Saves the Day), Morgan Eve Swain (The Huntress and Holder of Hands, Brown Bird), and Zac Clark (Andrew McMahon in the Wilderness), who all add their own musical flair and wide-reaching range of influences on what lands as a lush, layered, genre-bending and stunning indie rock effort- an absolute gem of a debut and an album you need to hear right away!

Currently out on a tour of the Northeast, I&R doesn’t currently have any Nashville dates announced, but with regular stops and clubs and DIY spots around town, you’ll surely have a chance to see them live soon. For now, stream Bankrupt City below, and find it on your streaming platform of choice this weekend!