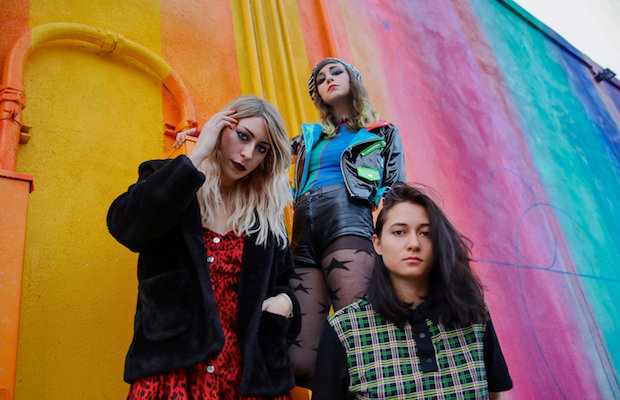 After wowing us in recent years rolling through town with groups like Skating Polly and Beach Slang (and set to return this fall in support of breakout indie punks PUP), LA poppy punk outfit Potty Mouth are finally set to play a proper headlining Nashville show, returning tonight, July 11 to perform at Drkmttr, in support of their incredible new full-length, Snafu, along with local faves Sad Baxter and Brooklyn’s Tetchy!

After exploding onto the scene with excellent 2013 debut Hell Bent, Potty Mouth, who originally formed in Massachusetts, further churned out critical praise and a respectable following for their self-titled 2015 EP, their first release with their current three-piece incarnation. Fusing an affinity for a grungy, ’90s alt rock and riot grrrl sound with more contemporary indie punk and pop punk, the band balance pop accessible hooks with rock bite, which has landed them on the road with groups as diverse as CHVRCHES and Against Me!, and festival like Riot Fest. They’ve put on a hell of a fun live show show each time we’ve had the chance to see them, and with their best album yet in tow, there’s never been a better time to see Potty Mouth live!

As regular readers know, we’ve been obsessing over local duo Sad Baxter for years now, who, with their grungy riffs, pop accessibility, and personal and melancholy themes craft typically sad, sarcastic songs which are delightfully juxtaposed with singalong worthy hooks, making them an essential rising act in Nashville’s flourishing underground rock scene. Their debut LP, Weirdy, arrived in 2016, and since then the group have only managed to generate more and more buzz, touring the country honing their fun, engaging live show, and crafting one of our favorite records of last year with their fantastic followup EP, So Happy. A couple of recent singles indicate exciting things to come, and this paring with Potty Mouth feels like an especially fitting one.

And finally, Brooklyn based outfit Tetchy seem to be the newest group of the bunch, having only just released their first single, “Fascist,” last week. With grungy, punk spirt and poppy undertones, propelled by the ferocity of singer Maggie Denning, they sound right at home on this bill. We always love discovering new groups and supporting small touring bands, and encourage you to show up early and do the same! Respect the space (the usual reminder: Nashville is exceedingly fortunate to have a venue like Drkmttr), and get tickets here or at the door!