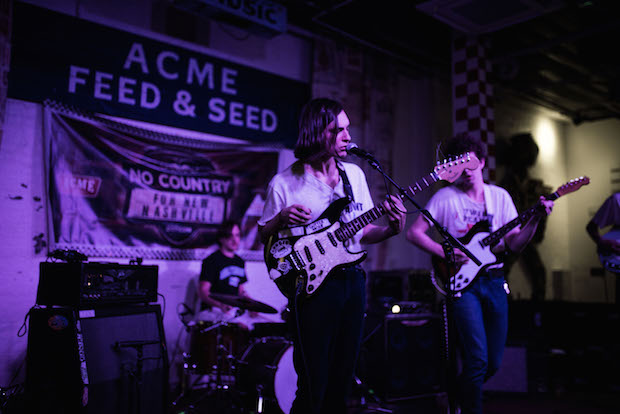 Our latest installment of our showcase series in partnership with Acme Feed & Seed was a little extra special last week. Opting for the theme “Fuzz,” we booked three awesome local acts that embodied the spirit of DIY garage rock, a scene that is thriving in Nashville and all over the country. Keeping this in mind, Tuesday April 26 we welcomed The Inscape, Crease Reader, and Goth Babe; Music City bands who personify the sounds that we wanted to showcase. Read on for a full recap of No Country’s Fuzz Night at Acme Feed & Seed, and check out some great shots from contributing photographer Nolan Knight.

Of all the Acme lineups I’d signed up to cover this year, this was my most highly anticipated. That’s not to say I wasn’t excited about the others, because I’m always stoked to see some live music at my favorite downtown bar. However, for at least the last eighteen months I’ve been fixated on the psych/garage/punk/lo fi revival that seems to be growing in popularity. On the west coast you have bands like Thee Oh Sees, or growing garage icon Ty Segall (read this post and this one too), plus the  Burger Records artists. Chicago bands like Twin Peaks (more here) represent in the midwest. East Coasters like Parquet Courts, southern bands like New Madrid, plus local Infinity Cat artist (here or here) round out the scene in the U.S. Abroad you have acts like King Gizzard & The Lizard Wizard … I could go on, but I’ll spare you, and get back to the topic at hand: Fuzz Night at Acme. 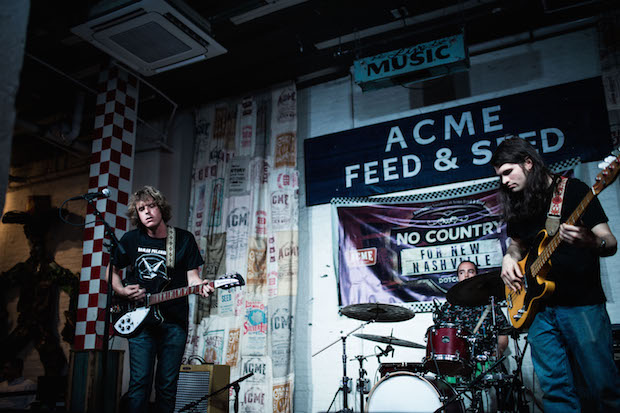 The Inscape. Photo by Nolan Knight.

So based on what I’ve already mentioned, I was very excited when my editor announced this lineup. First up were friends of the blog, The Inscape, who came on strong in the local indie scene a few years back. After a brief hiatus, they seem to be full steam ahead. They played a song I recognized from their kickass EP, Paradise Lost & Other Sounds, and some new material they’ve been working on. The power trio blasted through their straight forward psych/garage rock numbers, intermittently sprinkling in extended jams. They are also more than able to ease off the throttle, and kick out some chiller tunes. They were the perfect way to start the night. Acme, and Broadway in general, was inundated with DECA kids; members of an international association of high school and college students, plus teachers of marketing, entrepreneurship, business, etc. Some of them were bopping there heads along to the music as well, but others were busy checking their Snapchats. Of course if even just a few people get turned on to the music, it’s all been worth it. 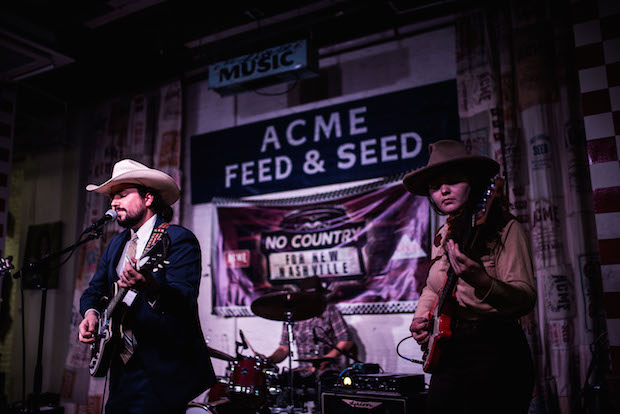 After scarfing down half of a hatchery (my favorite item on Acme’s menu), it was time for Crease Reader to do their thing. They moseyed up to the stage in their finest western wear, the drummer’s hair braided like Willy Nelson. Later I found out that the schtick was totally impromptu, something they’d decided to do at the last minute in honor of playing on Broadway. They had a unique sound, Brian Jonestown Massacre meets Real Estate, with just a hint of southern drawl in their wonderful vocal harmonies. They’d break out into heavy spaced out jams, that had my mind briefly drifting in a galaxy far, far away, before bringing me back with a familiar hook. Later in their set they rocked out an original called “Hour Glass,” which ended up being my favorite song of the set. Tipping their caps, they waved goodbye to the now mostly of drinking age crowd, and road off into the sunset. 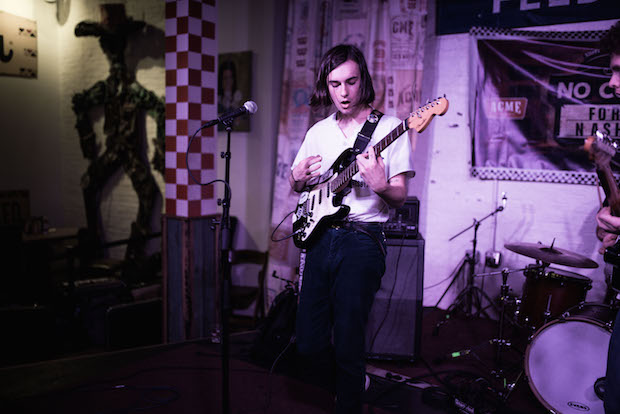 Closing out the evening of awesome was relative new comer to the local scene, Goth Babe. We dug what we heard on their debut EP, Wasted Time, and couldn’t wait to see them perform live. There’s been no shortage of opportunities, they seem to be performing everywhere all at once around town, but hosting them was even better.

The stage lights were tuned to a deep shade of purple (in honor of Prince maybe?) and once GB was plugged in, it was was blast off. Stoner garage rock, pushed through a fuzz-o-matic effects kit, that flirts with punk and ‘90s grunge. Frontman Griffin Washburn definitely has some Kurt Cobain influences, as well as the mentioned west coast contemporaries at Burger Records (he rocks their sticker on his guitar as well). The other guitarist was bounding around stage like a mad man through the duration of the show, and when they launched into a cover of Ty Segall’s “Wave Goodbye”, he ended up playing while laying down; thrusting hips into the ear when shredding the extra tasty licks. Their short but sweet set wasn’t enough to satisfy the crowd, so they played one extra song to help pacify us.

All-in-all it was an amazing night of Fuzz-tastic tunes, and we look forward to bringing you even more great local music in the near future. No Country Presents partnership with Acme continues to roll on, so be there next Tuesday, May 10 when we welcome Boulevards, Civilian, and Okey Dokey!

1. The Inscape, photo by: Nolan Knight

2. The Inscape, photo by: Nolan Knight

3. The Inscape, photo by: Nolan Knight

4. The Inscape, photo by: Nolan Knight

5. The Inscape, photo by: Nolan Knight

6. The Inscape, photo by: Nolan Knight