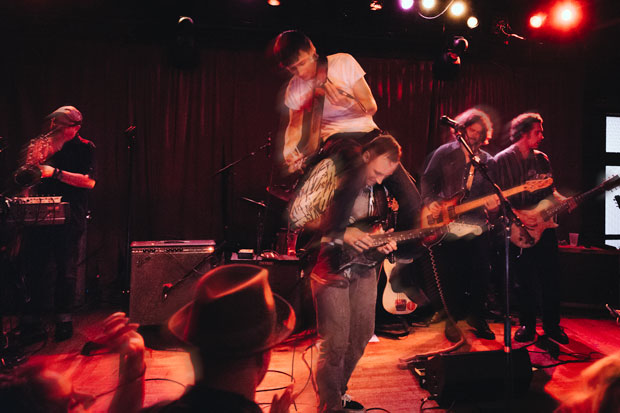 Surprising to no one here at No Country, Diamond Rugs killed their set last week at Mercy Lounge. Without a doubt, the rowdy alt-country, rock free-for-all will be topping some people’s lists for best shows of 2015. The openers, New Madrid and Justin Collins, had some very tasty tunes as well, and we can’t wait to tell you about all of it! Just read on after the jump, check out the photo spread from contributing photographer Jill Sanders, and, if you missed it, don’t EVER pass on a supergroup show again

On a night when there was no shortage of great bands in town (Built To Spill was at Exit/In, Dweezil Zappa playing Frank Zappa at Marathon Music Works amongst others), I was a little leery about a bad turn out. Welcome to Nashville. Never lacking for live music options. Where I’m from originally, any ONE of those shows would be a lucky catch. But this is Music City, so that’s just Thursday. 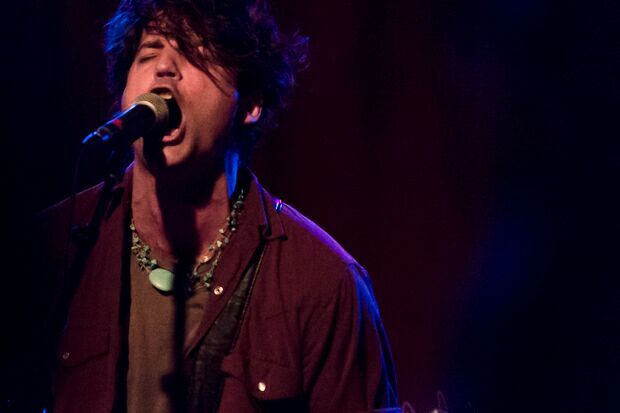 At first my fears were realized. It was past eight, and the turn out was poor at best. After jokingly thanking his friends and family for showing up, in response to the obvious sparseness of the crowd, it was time for Nashville-based producer Justin Collins (Diamond Rugs, Deer Tick, Middle Brother) to do his thing. He was joined by a large backing band, a big departure from his wonderfully simplistic, Bruce-Springsteen’s-Nebraska-style four track home recorded Home, Boy. On the first number, they built slowly to a no bull shit rock ’n’ roll throw down, and it barley let up from there. As Justin’s pure punk rock rasp drove the tracks, the crowd nearly tripled in size, and his buddies jammed on. Considering most of them work together in the same studio, it was no surprise the chemistry was top notch. I look forward to hearing if his newest effort, Schooly Dreams, which is supposed to drop this summer, goes more in this full band direction. By the end of their set, a respectable and rowdy crowd had formed, and the energy was on the rise. 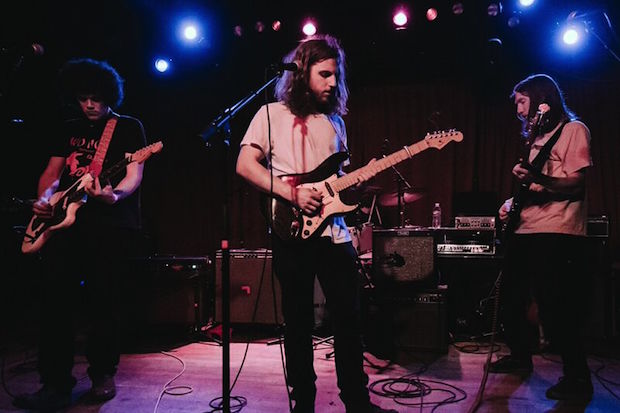 Without a doubt, it was going to be a tough act to follow. Lucky for everyone, New Madrid would be up to the task. The four young men claiming  Athens, GA as home, had a super high energy, psych-jam blast going almost immediately. They bounded around stage to the beat from start to finish, only stopping to fire off some richly reverb’ed vocals. I’m super familiar with their latest record, Sunswimmer, and was happy to hear them play most of it, but they also enticed more downloads from me when they visited their other older work. These guys have a super bright future, and we can’t wait to see them headlining the likes of The End or Basement East very soon. The high light of their super high octane set, for me anyway, was their closer; the eleven-plus minute, ambient, jam infused “And She Smiles,” which had everyone’s heads rolling around on their necks to the beat, as it increased in tempo, mellowed out, and then cranked it back up. Super vibey man. 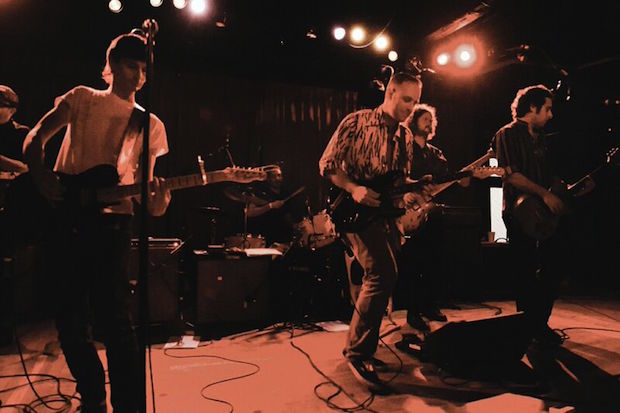 After we’d had another drink and a smoke, members of Deer Tick (John McCauley & Robbie Crowell), formerly the Black Lips (Ian St. Pé), Dead Confederate’s (T. Hardy Morris), Los Lobos (Steve Berlin) and Six Finger Satellite (Bryan Dufresne) took the stage as the supergroup Diamond Rugs. Honestly, they incorporate the best parts of each of their other bands sounds into a unique, alt-country, indie party-rock ho down. From the jump, it was obvious that we were dealing with very seasoned, tight playing musicians. At one point McCauley popped a string, and since they take turns on lead vocals, he was able to exit stage left and fix his guitar without really missing a beat. Who needs techs!

Of course, just because they were playing clean together, doesn’t mean there was any lack of slightly silly/sloppy shenanigans. During drinkin’ friendly, crowd favorite “Gimme A Beer,” the fellas began tapping their apparently never ending supply of Coors Light in volume. During a solo, McCauley went to his knees, an up-turned bottle in his mouth, funneling suds down his gullet, playing his instrument the entire time, and never missing a note. After the track, he popped a fresh cap with his teeth and handed the brewskie to the crowd. The sign of a stand up guy, who was later giving band mates piggy back rides in mid-song. They were all smiles, and obviously enjoying the shit out of playing with one another. Other high lights included the St. Pé helmed “Hightail,” and the epic brass on “Call Girl Blues,” all of which were on their self-titled debut. I wasn’t familiar with their newest record, Cosmetics, which dropped in February, but I’ve since added it to my heavy rotation.

We can’t emphasize enough how bad ass these guys are. All of their various ‘real’ bands are accomplished in their own right, but when you get this many truly talented musicians together, whom have been seasoned by years of touring and studio work, it really is something special. Like a indie-rock, mini Superjam really. If you were there, you already know what I’m talking about, but if you weren’t you need to get D Rugs in your life ASAP. You can start with some great photos from Jill Sanders, and maybe next time we’ll see you at the superband show, no matter who else is in town that night.