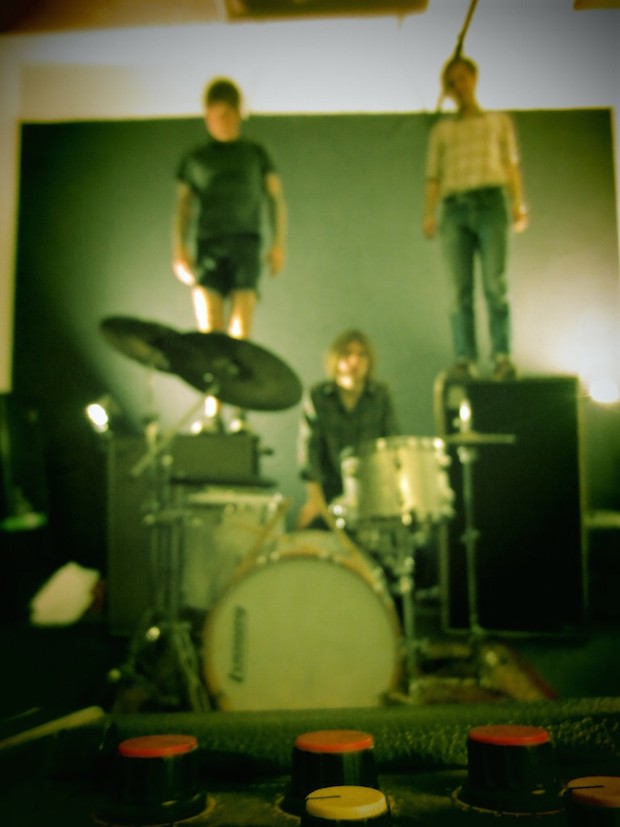 
Fans of all things garage that rock were at Exit/ In on Saturday in mass for one of the rowdiest, sweatiest, most beer soaked shows we’ve seen all year! If you weren’t there for the high octane, guitar laced jam fest, or you have no idea who Thee Oh Sees are, read on post-haste to get hip. If you were lucky enough to experience it with us, just read this review anyway, because just writing about it gave us goosebumps all over again. Locals D. Watusi and Drag City recording artist Jack Name filled out yet another awesome Saturday night in Music City. Have we ever mentioned how much we love living here?

When I saw Ty Segall back in August (read this post), and loved every second of it, a good friend of mine told me I should go ahead and get familiar with John Dwyer, and his band, Thee Oh Sees. Ty and John have pal’ed around San Francisco together and helped build a thriving garage rock scene there for several years now. Considering Nashville is currently having its own garage rock/party punk renaissance (i.e. JEFF the Brotherhood, Diarrhea Planet, Pujol, etc.), I felt it was my duty as a local music blogger to be in attendance when Mr. Dwyer and his latest lineup came to town.

After work, a change of cloths, and several bowls, I made it to Exit/In just in time for the first band, D. Watusi, locals we’ve covered before, and have always enjoyed. They brought their garage jam rock bag of tricks, per usual, and had everyone bobbing their heads instantly. The already large crowd doubled during their set. There was a buzz in the air, and in nearly everyone’s skulls from all the brews. By the end, their furious guitar and vocals no doubt won over some new fans.

Second up was outer space synth rocker Jack Name. He had a lo-fi Ziggy Stardust vibe that also touched on some Captain Beefheart, and even a little Nine Inch Nails. The electric drum and dual keyboards had everyone zoning out in the best ways possible. He played some stuff of his latest release, Light Show, which we’ve been digging since its release at the beginning of 2014. By the time he’d finished, the crowd had swelled yet again, and was approaching sell-out status. Everyone was in for a real treat, as the headliners took their places.

With two massive speaker stakes behind them, John Dwyer and his three-man version of Thee Oh Sees blasted into their set with a vengeance. By the second song, the rowdies in the front were swinging their tallboy PBRs around in the air, spraying brew over everything. Playing his guitar ridiculously high on his chest, his trademark, Dwyer shreaded his twelve string, approaching heavy metal level jamming, while still keeping it in his garage rock wheel house.

“And that’s why I love Nashville,” he said during a break, in reference to the ruckus that had already been stirred up. “Ahhh, I saw them earlier,” he added, pointing to a group in the front, “they were getting high in their car. Well done boys.”

Fast and heavy, he kept it going after the banter. During the next song, a stage diver accidentally took the mic with him when he jumped into the crowd. John had to stop the song to get resituated with a spare.

“Go all day guys,” he said about the stage diving, “just don’t take my shit with you.” Right back into the song, without skipping beat. Epic.

He continued to show out, bang his head, and thrashing his guitar between stanzas, with reckless abandon; a sight to behold. During a later song, he was on his guitar and playing keys simultaneously; a jack-of-all-trades. The crowd was intense, but courteous. People would say excuse me as they passed by to get to the front and join the moshing. Irony at it’s finest.

For the encore, Dwyer came out smoking a jay and waved to the crowd, before blasting off for another number or two. By the end, I felt like I’d witnessed something truly secular and unique. Possibly the birth (or rebirth) of a great new wave of music, akin to punk rock in the ’80s, but something some how all together new and different. New wave garage rock is here, with bold ambassadors from California, like Thee Oh Sees and Ty Segall, who, in-turn, open the door for our local scene of a similar ilk to take over. If you’re not already, get caught up, get on board the bandwagon, or simply get run over.