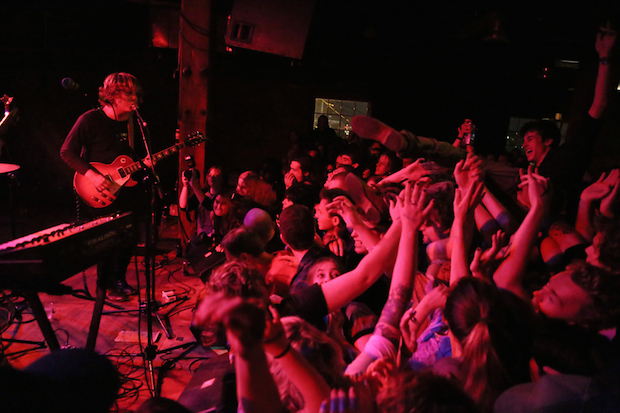 Psychedelic, garage punk-rock guru Ty Segall and his band pretty much crushed their SOLD OUT Mercy Lounge performance this week, so we’ll apologize in advance if you missed the growing indie legend in his element. Why are we sorry? Because you failed to attend one of the best shows we’ve seen all year, and we’re about to gush all about it.

We warned you it might sell out, and told you all about his new double LP, Manipulator, in this post, but, if you just can’t get enough from Mr. Segall, read on for a full review, along with photos from contributing photographer Michael Brooks. Heavy metal tinged garage rockers Wand, and equally heavy alt-rock three-piece Circle K, filled out a great bill of ear bleedingly awesome tunage! Just remember, the next time we tell you a show will probably sell out, trust we know what we’re talking about, and don’t miss out.

After fighting strangely thick Monday night traffic, and searching for free parking, we arrived in the middle of Circle K’s set, but in time to get a good taste. They had a heavy, loud punk rock vibe that we really dug, and their lead singing drummer managed to never loose his pacing, which is always impressive. The crowd was already filling in, and we were still hours away from the main event. We opened tabs and started drinking heavy early, because we knew ordering would be impossible later.

Once the openers had finished up, we mingled, stepped out for smokes, and inspected the merch table. Before too long, Wand (from LA, not the Canadian band of the same name) were all set to fire it up. They were lo-fi psychedelic rock meets heavy metal; hard, fast, and fuzzy the whole way through. We could see why Ty picked them up on tour, as they were a heavier version of his sometimes more glam interpretation of similar indie rock vibrations. The lead singer/guitarist told an interesting anecdote about how he had broken his guitar in half earlier on the tour, and how Sam Brown, a luthier in town, fixed it up no problem. He thanked Sam, who was in attendance, and got back to rocking. Only in Music City.

Next up was the man of the hour: Ty Segall. The audience had doubled in size and ‘the crush’ at the front, by the stage, seemed dangerously crowded. The kids had started crowd surfing towards the end of Wand’s set, and it didn’t look like they had even begun to catch waves. I think they might have even been hoisting themselves up while Ty was doing one last quick sound check.

Soon, Jimmy the manager came out in his 12-gallon hat and cheap suit to kick things off officially. He stayed on stage for the first song, but, from then on out, Ty Segall and his band were completely running the show. They tore through the new album, not in order, but almost in its entirety. The crowd was super rowdy, spraying water from bottles, and stage diving from the beginning. Their energy seemed to spike during a couple of our favorite songs on the new record, including “Tall Man Skinny Lady,” “Feel,” and “The Crawler.”

They burned through the set, jamming things out on occasion, feeding off the crowd’s energy the whole time. After what seemed like several hours, they stepped off stage for only a few minutes before coming back out for an encore full of older catalog favorites. During a pause in the action, one of the kids who’d been levitated above the throng, diving on and off stage all night, got Ty’s attention. He leaned in and shouted something to Ty out of mic range. Mr. Segall spoke into the mic, and informed us it was his new friend’s birthday. With little enticing, we all sang along to a drunken rendition of “Happy Birthday.”

When we finished, the kid made a song request, which the band said they would try to honor, if they could remember how to play it (they did). He then took the request even FURTHER, asking if he could sing it. Ty laughed and gestured toward the mic. We were all thinking, ‘oh Christ, this is going to be awful,’ but he shocked everyone by signing a near flawlessly heavy and clear sounding rendition of an oldy but goody  “My Sunshine.” The band, and especially Ty (who was smiling ear to ear), seemed to be more impressed/surprised than anybody.

After the song, and announcing this was the best birthday of his life, the fan returned to the crowd, and the band rocked out one more tune, before Ty himself crowdsurfed over the masses. All-in-all, it was easily one of the best and rowdiest shows we’ve seen all year. There just something about sold out shenanigans at smaller venues that gets our blood pumpin’! We’d possibly crown him king of 2014 right now, but, luckily for everyone in Music City, the fall concert season is just getting started, so there’s even more awesomeness to come.