This Saturday is the big night!  We’re teaming up with Third Shift Lager and some of our pals Electric Western Records, Elevent Productions, and East Nashville Underground for a one-night, two-stage, ten-band bill celebrating the diversity of Nashville’s independent music scene, and to send off the bands that have been selected to represent Nashville at South By Southwest 2013. The show is March 2nd, admission is totally free, and Third Shift is going to buy your first beer.  Starting last week, we’ve been spotlighting a different artist on the bill each day. Last week you got to know retro-rockers The JAG, Americana-fueled The Howlin’ Brothers,  the laid back rock stylings of Los Colognes, and the bluesy gritty soul of Luella & The Sun, and we sat down with swinging rocker Jacob Jones.

This week, we get things started with blues man extrodianiare, Patrick Sweany.  Patrick and I planned to meet on Saturday for the interview over beers.  That plan changed when he asked if we could reschedule the interview to check out Bobby Rush perform over at Grimeys.  I’m not one to miss a good show, so I just tagged along to do the interview there.  While there wasn’t much “interviewing” that happened, we did stand in a packed Grimeys for a 90 minute instore with ear to ear grins plastered to our faces.  So, without futher ado, let’s get right into the interview with the Ohio-born blues man, who Jacob Jones described as “an incredible performer who I can’t believe isn’t stupid famous.” 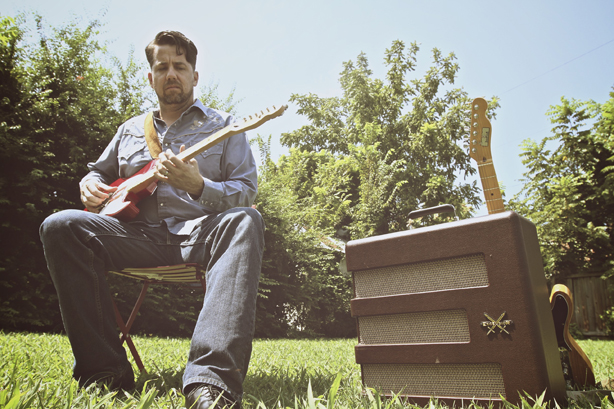 No Country: Wow.  That Bobby Rush set just blew my mind.  I mean, who does a 90 minute in-store?  Was that your first time seeing Bobby Rush?

Patrick Sweany: I know!!  That was awesome, and I think he only played like 6 songs the whole time.  It was more of just a jam session.  I had the honor of meeting Bobby in Arkansas several years ago through a radio DJ who was a mutual friend.  It was an honor to meet him.  He’s an incredible performer.

NC: That’s a definite understatement.  Anyway, let’s try to focus on you a bit.  Where are you from?  What inspired you to start playing?  What brought you to Nashville?

PS: I grew up in a town called Massillon, in Northeast Ohio, about 20 miles south of Akron. I was pretty enamored with blues and folk music through the influence of my dad.  He is a fingerstyle guitar player, more in the folk blues, piedmont style guitar. He played in the folk group at church when I was a kid, and would jam with the other guitar player after rehearsal. I would tag along, and just be mesmerized.  Dad is also a badass on the washtub bass. No foolin’… bad ass.  Mom is from Liverpool, England.  She came over in her early twenties. Mom’s the same age as McCartney. She saw the Beatles at the cavern, but didn’t dig the scene. Mom and her girlfriends liked the Swingin’ Blue Jeans. They were better looking. Her dad was a docker, worked on ships, and played mandolin. I never knew him, but apparently he could hear a song then play it. I do not have that gift, at all. It takes me forever.

Dad gave me access to his records and when I was interested later, guitar. I am glad he has good taste.  I played folk and blues kind of stuff in college, playing bars by myself, and just learning to entertain people with the blues, and later, soul songs that I liked. Then it became my job, and how I paid the rent.  Then all the old people I bothered and followed around to try and learn from, told me the same thing: Be you. Write your own songs. Write about your life. Tell your story.

I came to Nashville because I couldn’t keep a quality touring band going at home. There are some great players, but the road dogs move here. All the best musicians move here. I didn’t want to move, but I fell in love with Nashville very fast.

NC: Who inspired you to pick up a guitar?

NC: I have such a soft spot in my heart for the blues. I would have probably given an appendage to have seen Lightnin’ Hopkins perform, and the Bobby Rush show we just saw is probably the coolest thing I’ve seen this year (well, the secret Jim James show was pretty amazing too). Who is your musical idol?

NC: What music did you listen to growing up?

PS: I always just sort of found the blues. It was always the most interesting thing to me. It was the biggest sounding thing. None of my friends in high school dug it. They were into Poison and Motley Crue. I dug some of it. I liked Metallica. Still do, up until the Black Album of course. I dug on Led Zeppelin, Pink Floyd, Guns and Roses, and stuff like that. But I also listened to Simon and Garfunkel and Bob Dylan after school everyday, and I had also secret blues life that my friends just wouldn’t understand.

NC: Where/when was your first gig? Was it blues?

PS: I played my first gig in a coffee house, playing blues and folk stuff, my freshman year of college at Kent State. I’ve just always done this kind of stuff. I really don’t know how to do much else.

NC: You have easy comparisons to The Black Keys, and I know you have worked with Dan Auerbach. Tell me a bit about that experience. Has their success helped you out?

PS: Dan sat in at my monday night gig, when he was about 21. We jammed, he joined the band, we tried to be Houndog Taylor and the Houserockers, and then the the Black Keys started, and that kinda’ filled up the calendar. When he built a studio in Akron, about 6 or 7 years ago, he was kind enough to record and produce my band. As he has become more successful, the Black Keys Pandora station has exposed us to a huge amount of people. I don’t have any idea how that would be possible without their success I am very thankful for that.

NC: What is your guilty pleasure music?

PS: I’m don’t feel guilty about any of it. I love Slayer. I love Eddie Money. I love Bob Seger. I love Van Halen. I love the Circle Jerks. I love Jug Band Music from the 20s.

NC: What does the blues mean to you?

PS: I prefer to quote Bleeding Gums Murphy on this issue. “The Blues is about making other people feel worse, so that you feel better.”

NC: You’re heading to Austin for your umpteenth SXSW. Do you have any good or funny stories about SX?

PS: I snuck in the back door of Waterloo records, bypassing security, and a crowd of about 300 people, and saw the Stooges play a record store! Immediately after that, I walked to Auditorium Shores and saw Public Enemy.  That was a great day!

NC: Who are you most excited to see at the show on March 2nd?

PS: Well, I hang out with Joe of Luella and the Sun all the time.  He plays lead in my blues band, and he produced my last record and upcoming record.  Jon Radford of Luella played on the upcoming record, and we did some SXSW gigs a few years ago.  I rehearse sometimes and work out over at the Los Colognes compound.  Adam from Luella and the Sun played bass for me on the road most of last year, and Jack from Jacob Jones band played with me before Adam.  Los Colognes, Jacob, and most of the East Side kids on the bill all hang out at the 5 Spot, which is right by where I live.  So I hang there sometimes too, and usually I tend to comically start inflexible Beatles vs. Stones arguments right before last call, just for my own amusement.

NC: What other Nashville musicians are you currently digging?

NC: What is coming up for Patrick Sweany?

PS: New record is coming out in June.  As far as touring goes, we have a bunch of east coast and midwest dates with Wayne Hancock right after SXSW.

NC: Do you have an RV we can use for Bonnaroo?

NC: Dammit.  The search continues.  Thanks for taking the time to hang out, and we’re excited to have you on the bill on March 2nd.

Patrick is playing in the middle of the line up on The Mercy Lounge stage on Saturday, March 2nd.  You can check out a session Patrick performed last summer at KDHX in St. Louis below.  You can follow the man on Twitter and Facebook, and here’s his website.  If you haven’t already, click on the Facebook page for more information about this free show.