Tonight marks the second to last edition of the new (sort of) weekly concert event, Nashville’s Dancin’, and it is going to be a doozy.  Things get started at 5:30-ish, and features sets from some of our local favorites MODOC, Daniel Ellsworth & The Great Lakes, & The Kicks before finishing off with acclaimed singer/songwriter Edwin McCain.

So, what are you going to do to get past the sad malaise of one free concert series ending?  C’mon Nashville, you just get ready for the next free concert series.  Live On The Green starts up on August 8th, and we already told you how excited we are about the line up for those 6 weeks in August and September.  Well, more exciting news dropped this morning with the announcement that Live On The Green has teamed up with some of our favorite local producers (Hustle!, Keep On Movin’, Recognize, Y2K, & Whiskey Disco) to bring you “official after parties” over at Marathon Music Works after each event.

The weekly after parties will kick off after LOTG finishes up in Public Square Park, and will keep you groovin’ until the wee hours of the morning.  There will be free transportation via Grand Avenue Shuttle to get you to Marathon Music Works.  If you prefer, you can even park at Marathon for $5 before LOTG, and take a free shuttle to the event as well (that beats downtown traffic).  This little party is free with your LOTG VIP Pass, or it will cost you a mere $5 without.  We have told you about the good times of Keep On Movin’ DJ Jacob Jones and have certainly had some good times hangin’ with Coach & DJ Rate, so this is guaranteed to be a good time for all.  Special guests will be announced in the coming weeks, and we will try to keep you up to speed on those as well. 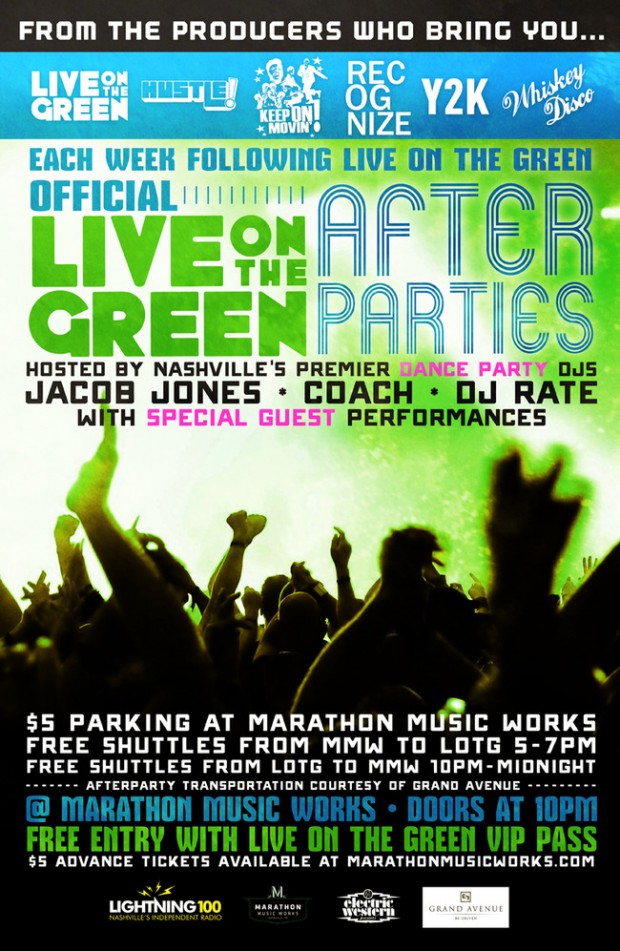