J. Tillman is a bit of an enigma.  He was probably best known as his stint with Fleet Foxes during the explosion of their career from Helplessness Blues, but that was not Tillman’s calling.  While playing with Fleet Foxes, Tillman was hard at work creating his own sound.  That sound turned into his newest project Father John Misty.  You might say a drummer for the already established Fleet Foxes would be nuts to leave and venture out on his own, but J. Tilman didn’t just jump ship.  He ran and leapt from that ship, and landed on a cigarette boat and sped away in a direction all his own. 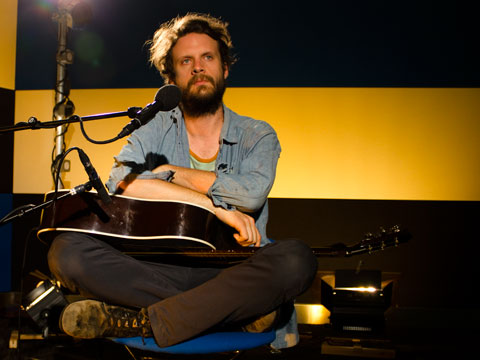 The new Father John Misty LP Fear Fun is ethereal in that 60’s pop sort of way, and it is a breath of fresh air to this listener.  It’s not full of ridiculous synths and overly processed electro babble that we see so much in the current hipster flooded brand of the national indie scene.  It’s just some solid music.  It’s the kind of thing that Fleet Foxes could have been, Pearl Jam once was, and Beck should become again.  I’ve honestly been waiting for this Nashville show announcement for months now, and, with all due respect to Bonnaroo, hoped I would get a club show rather than a packed, dusty, sweaty appearance at The Roo.

Head over to the Marathon Music Works website to grab your pre-sale tickets (password is FEARFUN) for this one starting today, and mark your calendars for the show on May 10th (which all but rules out a Bonnaroo appearance… or maybe not?).  You also get to spend some time with Adam Green & Binki Shapiro who will get things started around 9pm, and you can check out a pretty sweet 27+ minute set of them below.