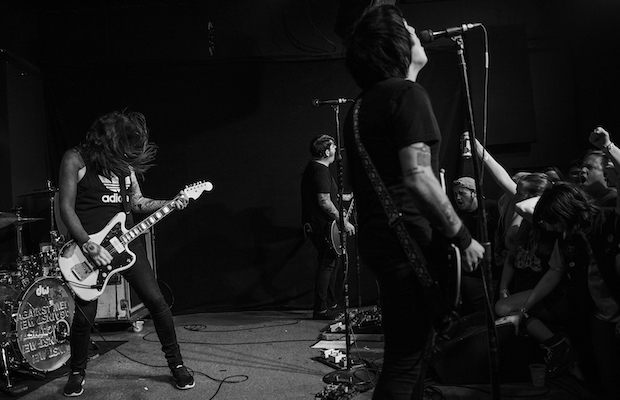 Being the giant fans of punk outfit Against Me! that we are, we recently decided on a whim to sneak over to Memphis, to catch the group at The Hi-Tone Cafe, for an intimate affair they booked to fill in an off day from the massive arena tour they’re currently on supporting Green Day. Though we’ve never seen Against Me! in an arena, we can only imagine the dichotomy of playing for tens of thousands of people one night, then jumping into a tiny room for a few hundred in a dingy club the next, a testament to the band’s enduring punk ethos and genuine love for what they do. While we, unfortunately, largely missed openers Mobina Galore and Typsetter (according to other attendees, they were great), we arrived just in time for what turned out to be the smallest Against Me! shows we’ve seen in years, and, without a doubt, one of the most electrifying. Read on for our take, and check out some photos below!

Since 2013, around time time they released Transgender Dyphoria Blues, a record which would not only redefine Against Me!’s place as one of the most relevant bands in modern punk, but also serve as a coming out of sorts for singer Laura Jane Grace’s gender transition, I’ve seen Against Me! seven times. And that’s not just because I’m a huge fan (I am), but also simply because they’ve been so dman active. I’ve covered headlining and co-headlining dates in Nashville, as well as spots at Forecastle, Bonnaroo, and Shaky Knees, all for this site, and two outings in Chicago for another, but not since their Mercy Lounge appearance in 2013, have I seen them in a space as small as The Hi-Tone. Comparable in size, perhaps, to Nashville venues like Exit/In or The Basement East, the cozy room had a small stage, no barrier, and modest, neutral lights. Even as an all ages affair, the room only appeared to be half full, and with roughly 200 or so fans in attendance, I can definitely say it’s the smallest Against Me! show I’ve seen in a decade. For a punk fan, it was like a dream; I could see, I could hear, I could move, I could work my way up to a good spot, despite arriving right before the headliners (this, as you locals now, is not so common here in Nashville, for better or worse). Before the band even took the tiny stage, I knew this was going to be a special show, and one most certainly worth the three hour weeknight drive (groan, I know, we’re spoiled here in Music City never having to drive for shows, but I clocked in plenty of hours doing just that growing up in small town Virginia). 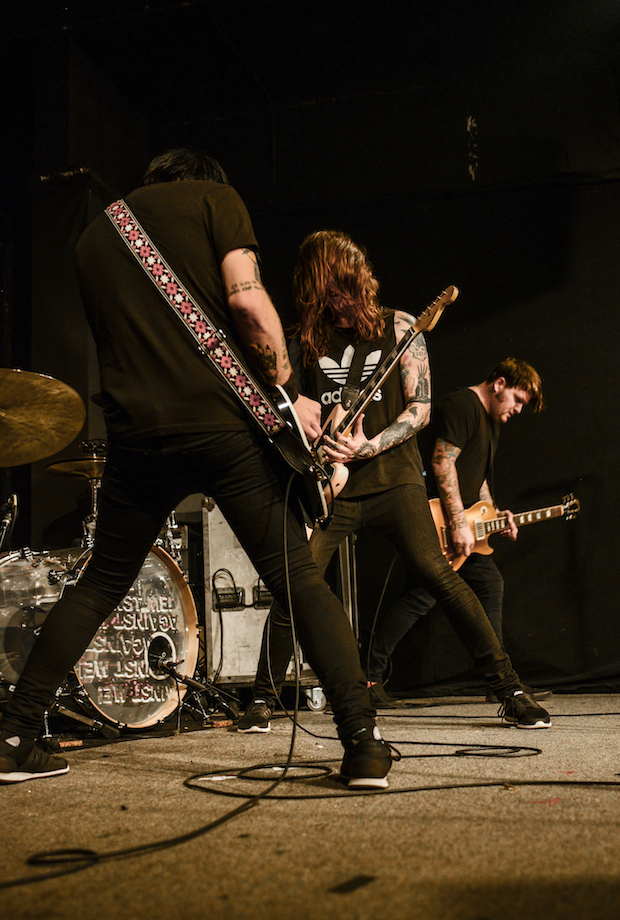 Part of the motivation to catch this performance (other than the super cool, small room setting) was that I hadn’t seen AM! live since the release of their latest album, Shape Shift with Me, last fall. I was fortunate enough to a part of one of the first crowds to hear some new tunes last summer at Atlanta’s Shaky Knees, and, while a few cuts made repeat appearances this show – “333,” “Haunting, Haunted, Haunts” – it was my first time hearing several others – “Rebecca,” “Delicate, Petite & Other Things I’ll Never Be,” and personal favorite, “Crash.” Starting strong with “True Trans Soul Rebel,” the group crammed onto the tiny stage, their backdrop barely squeezed onto the wall behind them, and proceeded to play one of the most personal, fun, and engaging performances I’ve ever seen. Mere inches from the audience, the band feed off of the crowd’s energy, which, though somewhat reserved to start, built momentum with each song, especially the deep cuts, and had descended into full on moshing and crowd-surfing by the end (the no barrier, no security thing could have been a lot dicier, but fortunately Against Me! fans take care of each other). Grace seemed to be having a blast, silly and probably a little stoned, and flexed her ability to command a room of any size, blasting through a set full of angst, intensity, and passion, commenting on lots of good memories from Memphis shows past. 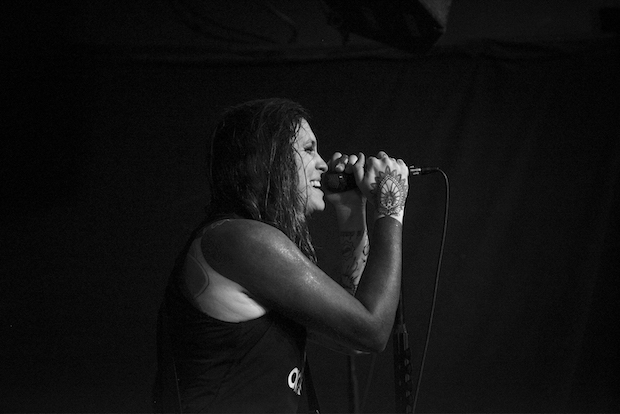 High marks of the set included singalong primed favorites like “Miami,” the immensely underrated “Bamboo Bones,” and, of course, the one-two punch closer of “I Was a Teenage Anarchist” and “Black Me Out,” which both serve as a reminder that even when Against Me! are at their biggest and most memorable, they’re still an earnest, loud, punk band at their core. Though I had spied a Clash cover on setlists from other shows, the total lack of a backstage (and imminent rain storm) meant that the band opted not to do a full-on encore, but, rather, Laura reemerged to tackle a cover of The Mountain Goats’ “The Best Ever Death Metal Band in Denton,” apparently for the first time, and to my intense delight. So, with a singalong of “Hail Satan,” what was, if not the best, at least the most personal and fun Against Me! show I’ve seen in years, came to a satisfying close, and I spent a solid three hours grinning all the way home. Here’s hoping one of punk’s great bands make it back to Nashville sooner than later!