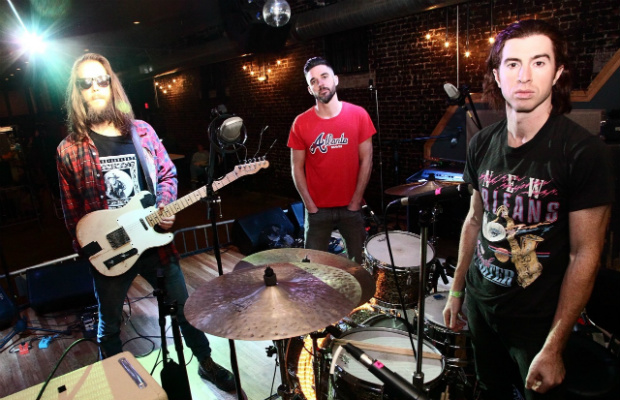 Well, we can already feel it. The intense Nashville summer heat is ever so slightly starting to die down and make way for fall. Before we know it, the leaves will be filled with a multitude of different colors, pumpkin spice will be in the air, and the fall music onslaught will officially begin here in Nashville. Kicking off the season on the east side of town tonight are three of the heaviest hitters in the local rock scene. Long standing rock titans The Whigs will be joined by two of the hottest rising acts in the local scene in The Gills and Reality Something.  They will take over The Basement East tonight starting at 9 pm (doors at 8 pm), and tickets are still available for $12.

Head below for a full preview of the evening, and grab tickets while you still can.

The Whigs are no newcomers to the scene, though they are relatively recent transplants to Music City. Forming in 2002 when Parker Gispert and Julian Dorio met at the University of Georgia, they quickly garnered buzz, and found themselves on tour with acts such as Franz Ferdinand and The Killers. When a deal with RCA Records went awry in 2004, the band decided to record their first album by themselves, and created the ethos for the independent, kick ass attitude that has fueled their five records since. Their music is accessible to most, filled with catchy hooks and up-tempo rhythms, but it is the grittiness that echoes the first few Kings Of Leon records that really draws you in and keeps you engaged as a listener.  The band’s last two records have been released via their new home at New West Records, and their 2014 gem, Modern Creation, honors everything rock n roll, from their vast amounts of 60’s and 70’s influences to their own personal experiences. The Whigs have been road warriors of late, and are currently hyping a 10 track live record, Live In Little Five, that is set to drop in November.  Based on our advance listen, the new record captures the band’s incredible spirit, and also features two previously unreleased tracks from their upcoming 6th LP.  Head below to watch the recently debuted live video for “Like A Vibration” from their 2008 record, Mission Control, to get a taste of what you are in store for tonight.

We’ve had our eyes on The Gills for quite some time now, but the Pensacola turned Nashville rockers have seen their stock rise in the past year or so.  We really began to notice the shift after the release of the undeniably catchy single “Lemonade,” and a ripping set at our Acme Feed & Seed showcase, late last year, and we’ve seen them on an almost unbelievable number of rock bills since then.  We helped them premiere the track “Aria” this summer, which is an undeniable rocker featuring an indestructible bass line.  That single is the debut from their upcoming sophomore EP 2, due out on Oct. 14, and tonight will be an excellent chance to hear what else that new EP will offer.

One of our hottest finds in the past year within Nashville’s rock scene is Reality Something. Fronted by Elena Franklin and featuring former Turbo Fruits guitarist Kingsley Brock, their debut EP showcased a power-pop aesthetic with the solid attitude of 1970’s rock n roll.  We put them on their first Nashville bill when they played our Acme Feed & Seed showcase late last year, and they have continued to blossom since, sharing the stage with the likes of The Psychic Ills, Speedy Ortiz, and Drowners to name just a few.  Earlier this summer they released a new single, “Break It,” from their forthcoming debut LP, which you can check out again below.  If you haven’t gotten hip to Reality Something yet, this is a perfect bill to check them out, because they are one Nashville band that you want on your radar.

The Whigs, The Gills, and Reality Something will perform tonight at The Basement East. The show is 21+, begins at 9 pm (doors at 8 pm), and tickets are available for $12.