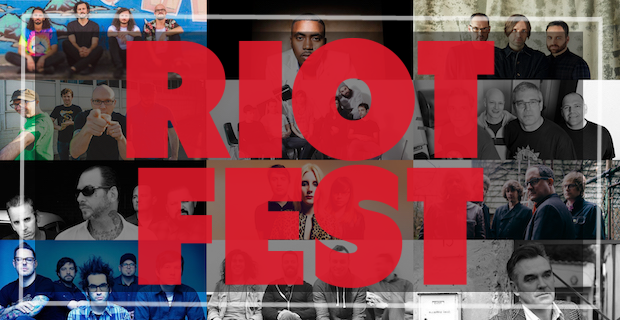 What began as a modest multi-venue club festival in Chicago just over a decade ago, and has, over the years, grown to become the city’s second-largest music fest, just behind Lollapalooza, the punk-centric Riot Fest is now a certifiable institution, spawning spinoffs in various other cities across North America (this year, Denver), while doubling down on its Chi-Town roots, with jaw dropping, headline grabbing lineups and major reunions in recent years. This weekend, Sept. 16-18, Riot Fest returns to its new home of Douglas Park, adopted last year, and with a bill headed up by Morrissey, The Flaming Lips, and a reunion of the original Misfists more than 30 years in the making, the event reigns as not just one of the year’s best punk festivals, but one of the best festivals around period. Per usual, Riot Fest Chicago’s entire bill is absolutely stacked from top to bottom, even including a few Nashville favorites, and we’re thrilled to announce that we’re road-tripping north to bring you full coverage, winding down what has been one stellar, busy festival season! In case you’re ready to Riot too (or if you’re joining us from elsewhere), we’ve put together another handy festival guide, where we’re counting down our top picks for each day. Grab tickets here if you still need ’em, find full festival details (along with after party info and more) right here, and check out our picks below for 15 Saturday acts you don’t want to miss!

Made up of Frank Iero of My Chemical Romance and James Dewees (who’s also spent time in MCR as a live keyboard player, but is perhaps best know for Reggie and the Full Effect), and initially formed in 2012, Death Spells incorporate electronic and glitch influence into their more traditional heavy punk sound. Though inactive for the past few years, the duo sprung back to life to release their first full-length this year, with just a handful of shows on tap.

LISTEN | “Where Are My Fucking Pills?”

WATCH | “Why Is Love So Disastrous?” (Official Music Video)

Alt rock pioneer Bob Mould is best known for his seminal bands Husker Du and Sugar, but his solo career has been just as viable, and, inexplicably, has only managed to get more relevant and critically acclaimed over the last decade of his near 30 year run. Celebrating a great new LP, Patch in the Sky, Bob’s seasoned chops and prestigious and influential reputation make him a must-see, even though he tours regularly.

Atlanta post-hardcore rockers Microwave have quickly been amassing buzz, thanks to their breakout debut Stovall, and bombastic live show. Funneling punk sensibilities into an indie and eclectic sound, also channeling elements of emo and post-hardcore, the band will release their sophomore effort, Much Love, later this month, and early singles already mark some of their best, most earnest material to date.

Though they never quite ascended to the household name status of some of their more commercially viable peers, long running Orange County pop punk staples The Vandals, now more than 35 years into their existence, have nonetheless helped shape and influence punk’s renaissance. They haven’t released an album in a decade, but the band remain an impressive, persistent, and legendary live force.

Riot Fest’s reputation is that of a punk fast, and while more conventioally punk acts certainly make up a bulk of the lineup, the offerings are more eclectic than that, with a healthy smattering of hip hop each year. Members of Wu-Tang and more are slated to play Saturday, but it’s hip hop legend Nas, whose consistency and crossover appeal has made him a festival staple in recent years, that we’re looking forward to the most.

LISTEN | “If I Ruled the World”

We’ve seen Death Cab for Cutie at several other fests this summer, and have been blown away each and every time. Though minus guitarist and founder Chris Walla, the beloved indie group, celebrating their new album Kintsugi, are experiencing  something of a second wind, able to balance a career of legendary releases with an eye towards the future. Expect plenty of Plans and Transtalanticism, especially for a festival crowd.

One of the original underground pop punk bands that helped put Chicago’s viable indie punk scene on the map, Smoking Popes have influenced countless other acts, helping shape a sound that would eventually morph in to the radio juggernaut of the late ’90s and early ’00s. After lukewarm major label ambitions, they briefly disbanded from ’99-’05, and have emerged in the last decade as viable contemporary force with cult, nostalgic prestige.

LISTEN | “I Need You Around”

Fucked Up hail from Toronto, initially a celebrated fixture in Canada’s underground hardcore scene before finding breakout success thanks to constant critical yaccolades for their high-concept, substantive, and visceral sound. The band have been experimenting in recent years with concept albums, expanded lineups, and more, making them not just one of hardcore most’s interesting acts, but also an amazing live experience to boot.

Formed nearly forty years ago in Manhattan Beach, California, though they’ve broken up and reformed numerous times since, the Descendents are one of punk’s most dependable acts, setting the template for contemporary pop punk decades before it came in vogue. Celebrating the release of their first album in 12 years, Hypercaffium Spazzinate, the legendary group now have the distinction of dropping classics (or classics in the making) over four separate decades.

Social Distortion would be a no-brainer recommendation in any scenario, but their Riot Fest set is extra special, since they’re set to play their classic LP White Light, White Heat, White Trash in full to celebrate its 20th anniversary. One of their more unadulterated punk efforts, the beloved west coast cowpunk rockers still have the chops to make it soar. These year’s full albums sets are fewer, but Riot Fest made ’em count.

LISTEN | “When the Angels Sing”

Considering the fact that they’re fast garnering a reputation for being of the best punk bands of the generation, it’s kind of shocking that White Lung are only playing one of the small stages (albeit in an evening slot). Fueled by the success of their amazing fourth album, Paradise, the Canadian trio are definitely poised to rip, with a frenetic, engaging, and uncompromising live show worthy of their personal, ferocious, and unparalleled catalogue.

Most fans of The Hold Steady would likely agree, while all of the band’s material, an epic heartland-rock infused flavor of indie, is amazing, their best (and certainly most famous) effort ever is 2006 LP Boys and Girls in America. To celebrate the monumental album’s 10th anniversary, the Brooklyn band are prepping to perform it in full, elevating their set from highly-anticipated to absolutely essential, scheduling conflicts be damned.

When Motion City Soundtrack announced earlier this year that they would disband after one final farewell tour, and began plotting their last ever run of dates, their appearance at Riot Fest was widely expected to be their last show ever. In truth, it’s almost their last; the following night, they’ll play to a sold out crowd at The Metro. For all intents and purposes though, this is your final chance to see the famed and influential pop punks, and if not for the legendary prestige of the acts at our #1 and 2 spots, their set would be a contender for the weekend’s most essential.

Like Motion City Soundtrack, enigmatic and rabidly beloved pop punk turned eclectic indie rock juggernaut Brand New seem to be taking a victory lap, dropping hints that 2018 would be their final year as a band, though due to the group’s cryptic nature, the details are pretty murky. Equally unclear is when, or if, a new album might arrive, though increased activity and new singles over the past year seem to indicate that the long-awaited effort might materialize sooner than later. Transcendent and unrivaled in their art, Brand New are a raw, intense, and beautiful live force when firing on all cylinders, and we strongly encourage seeing them whenever you can, while you still can.

WATCH | “The Quit Things That One Ever Knows” (Official Music Video)

Our top pick for Saturday, if not the whole weekend, the legend and influence of Morrissey can hardly be summed up in a single paragraph. Though his reputation for controversy and flakiness has been a talking point in recent years (there’s even some lingering uncertainty if he’s even going to be at Riot Fest, though we fully expect him to show up), it’s inconsequential against the former Smiths frontman’s indescribable influence, cult-like following, and amazing musical output. A Morrissey show is like an other-worldly experience for the devout (Brand New’s Jesse Lacey, even, is an admitted superfan), and still an unequaled feat of showmanship, charisma, and raw talent or the uninitiated. Sure, he’ll probably bitch about the food, feel out of place, and mock the crowd, but we’d expect no less from the Pope of Mope. There’s a reason he’s in the top spot, and you should make his performance your top priority no matter what.

LISTEN | “World Peace Is None Business”