It’s hard to believe that we have reached the final weekend of Live on the Green.  It seems like just yesterday that we kicked things off with Andra Day, Allen Stone, and White Denim, and have watched the bar continually rise with Jenny Lewis, Passenger, and JR JR. in week two and Dawes, Kurt Vile & the Violators, and The Record Company last week.  Now, we’ve reached the final weekend, and things got off to a bang last night with Young The Giant and BØRNS leading the charge including a pack of talented locals including COIN, SIMO, and *repeat repeat.  Tonight, the lineup grows even more when Band Of Horses lead a hit parade including another stack of locals featuring Nikki Lane, The Wild Feathers, Daniel Ellsworth & The Great Lakes, Rayland Baxter, Josh Farrow, and Canadian rockers The Sheepdogs.

Following the format adopted a couple years back, and expanded last year, Live on the Green will conclude this week with an epic three-day, two-stage Labor Day weekend finale from Thursday Sept. 1 through Saturday Sept. 3.  Per usual, LOTG is free and all ages, and the music tonight will run from 5 p.m. to 11 p.m. Gates open at 4 p.m., and there will be plenty of food and beer vendors on site to meet your needs. Parking is just $5 at the Public Square Park Garage below the festival site, and various other garages and street parking options are available on the surrounding blocks, as well as across the bridge at LP Field. VIP tickets and backstage passes are all sold out for tonight, but there are, as of publishing this, still some packages available for Saturday Sept. 3. Find out more about this week’s installment below, and find out more about the entire season on Live on the Green’s site. 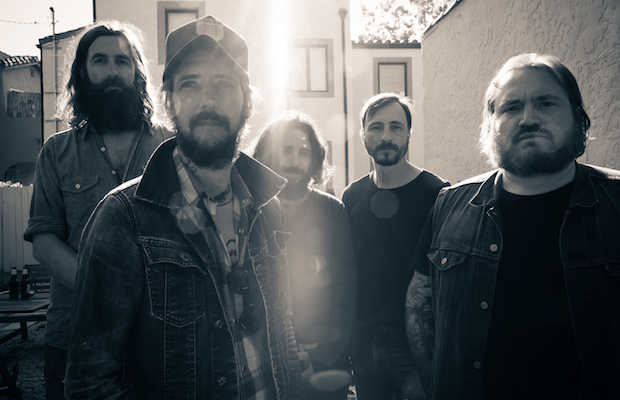 Anchored by singer/songwriter Ben Bridwell, acclaimed indie group Band of Horses first came together in Seattle in 2004, and, after early buzz and spots opening for popular acts like Iron & Wine brought the band to the attention to Sub Pop, they released their debut, Everything All the Time, through the label in 2006. They eventually relocated to Bridwell’s native South Carolina, and began work on their breakthrough second LP, Cease to Begin. Critical buzz, some minor commercial attention, and an ever-growing fanbase helped propel the rockers to new heights, and, by the time they released 2010’s Infinite Arms, they’d nabbed a major label record deal and had graduated to mainstream breakout success.  Ben and the band have stayed busy since, dropping another studio album in 2012, a cover album with Iron & Wine’s Sam Beam, and a live record from Nashville’s Ryman Auditorium in 2014.  Despite all of this activity and the incessant touring, including Bonnaroo this year, Band of Horses still managed to find time to release their latest full-length, Why Are You Ok, in June of this year, and their tried and true formula of folky indie rock rings true again on standout singles like “Casual Party,” “Solemn Oath,” and the J. Mascis collab, “In A Drawer.”  As they do in most festival settings, Band Of Horses stable a catalogue worthy of hits that could easily fill the hour and half time slot, and absolutely know how to play to what is sure to be a packed LOTG crowd.

East Nashville country outlaw queen Nikki Lane first made a name for herself in Nashville with her caution to the wind songwriting that she introduced us to with 2011’s Walk Of Shame, and the walk has been anything other than shameful since.  After deciding to call Nashville home for a while, she connected with Black Keys guitarist and frontman Dan Auerbach to produce her 2014 masterpiece, All Or Nothin’, which firmly put the americana starlet on the map, and warned everyone to take notice.  That record won our Nashville record of the year in 2014, and we’ve jumped at most all of the chances we’ve had to see Lane since.  Her classic style is in the vein of her genre’s headstrong and fearless women like Loretta Lynn as well as its gun-toting, pot-smoking outlaws like Willy Nelson, and she hasn’t exactly been embraced amongst the big machine of country music.  Rather, like many of the artists that call the east side of the Cumberland home, she’s been labeled too country for the country music establishment and is more likely to be called “Americana” or to play shows with rock acts than to play fiddle for the corporate stiffs. Rumor has it that, amongst heavy touring, Lane has been working hard on her follow up to All Or Nothin’, and we wouldn’t be surprised to hear her working a few news songs live on Friday night. 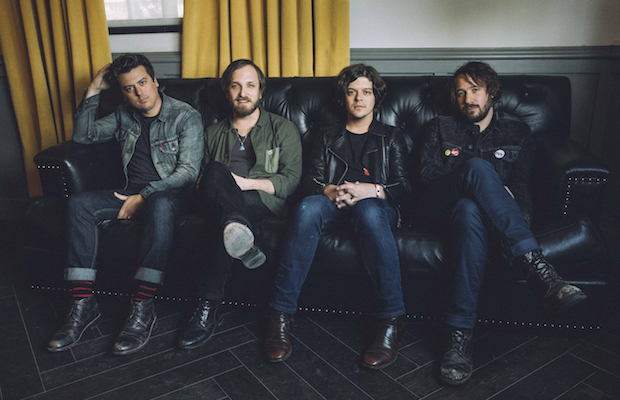 We pretty much watched The Wild Feathers blossom as a band at Live On The Green back in 2013, and seeing the success that they have managed to attain since is truly impressive.  Their debut self-titled release garnered a lot of attention for the band, and saw them with numerous television appearances, festival slots across the country, and tours across the world.  They did manage to find time to release their sophomore LP, Lonely Is A Lifetime, earlier this year, and promptly sold out their Ryman headlining debut right after.  To say The Wild Feathers’ no-BS style has caught on locally would be an understatement, and, as we discovered in a recent interview with them, they feel the same about Music City.   They  combine elements of rock, country, blues, and and folk to create a style that is all at once retro in its tendencies and modern in its aesthetic. Comprised of four former frontmen, the band play with a seasoned expertise polished well beyond their relatively short existence, and you’ll see on Friday night why they have seemingly blown up over night!  Check out their latest video for “Help Me Out” below to get a taste of what to expect.

If you’ve followed No Country for long, you know that we’ve been fans of Daniel Ellsworth & The Great Lakes since pretty much the beginning.  Their poppy brand of indie rock has been firing on all cylinders since their debut LP Civilized Man dropped back in 2011, and really seemed to take a step forward when the band returned to the studio to record their follow up Kid Tiger with Vance Powell (Jack White, The White Stripes, The Raconteurs), which released in early 2014.  That same year, they made their Live On The Green debut, albeit in the first set to a still filing in crowd, but they made the most of it and truly wowed on the biggest stage that we’ve seen them perform on.  After a year or so of heavy touring, DE&tGLs retreated to a cabin in Minnesota to write and arrange the songs for this year’s EP Bemidji, and they returned to Nashville to again record with the legendary Powell.  The new EP is described as a companion piece to Kid Tiger, and sees the band take yet another step forward by maintaining their impossible-not-to-dance to brand of indie rock, while exploring darker and more emotional subject matter.  If you somehow, haven’t gotten to know Daniel Ellsworth & The Great Lakes, you should absolutely make it a point to head over to their well placed set on the auxillary stage on Friday night to rectify that mistake in your life.

Local alt-country artist Rayland Baxter has come a long way since he collaborated with Caitlin Rose on her 2010 track “Shanghai Cigarettes.” He’s the son of multi-insturmentalist Bucky Baxter, who has played alongside everyone from Bob Dylan to Ryan Adams, and, just like his father, Rayland is a versatile performer who has a style all his own. His debut album feathers & fishHooks earned exposure outside of the Music City, and helped him secure spots opening for acts like the Civil Wars and Grace Potter. In 2015, he released his celebrated sophomore album, Imaginary Man. The record’s infectious lead single, “Yellow Eyes,” blew up inside the blogosphere and rightfully landed on many best-of lists.  Although his music is regularly categorized as Americana, his live show is purely rock and roll. Even with an impressive band of Nashville players behind him, Baxter’s abilities as a guitarist and his entrancing vocals make him impossible to keep your eyes off of. He’s spending a good part of this year out on the road with The Lumineers, so expect him to make his Live On The Green debut packed with confidence and maybe even a few tricks up his sleeve.

The soulful folk singer-songwriter Josh Farrow makes acoustic music influenced by blues, gospel, and Americana that’s surprisingly sexy, as we found out several years ago when he sang a beautiful rendition of “Merry Christmas Baby” at our Christmas parties.  It’s a long way from the punk rock that Farrow played in his homeland of Chicago, as he now finds himself firmly planted in the ever growing Nashville Americana scene.  Don’t label him too quickly though, he’s managed to sway crowds from Hangout Fest to Merlefest, and his smoky gospel blues single “Devil Don’t You Fool Me” has racked up hundreds of thousands of streams.  Farrow is gearing up to release his first full-length, Trouble Walks With Me, on Oct. 28, and it boasts an enviable cast of musicians including Ruby Amanfu, Elizabeth Cook, and the McCrary Sisters to name just a few.   Make it a point to get to LOTG early to get a first hand listen to one of the records that we expect folks to be talking about this fall.

The Canadian, born-to-be Southern, rockers The Sheepdogs return to Music City to kick off Friday night at Live On The Green.  Saskatoon, Saskatchewan might not seem like a hot bed of throw back anthemic rock and roll, but ever since the first time we saw them back in 2012 performing at The Basement, it was clear that we could throw preconceptions out the window.  That was right after the band were the first unsigned act to appear on the cover of Rolling Stone, and their authentic take on 60s and 70s rock certainly made them worthy.  They made the most of that honor, and teamed up in Nashville with Patrick Carney (Black Keys) for production duties on their self-titled full length.  The band was ultimately picked up by Warner Brothers, where they released last year’s beautiful, Future Nostalgia.  These guys were the real deal when we saw them in 2012, and we were even more blown away when we saw their road worn live set late last year.  It’s too bad that The Sheepdogs are lined up in the opening slot, because they are deserving of a much larger audience later in the evening.  Dig into the video for “Downtown” from Future Nostalgia below to get an idea of their authentic sound.