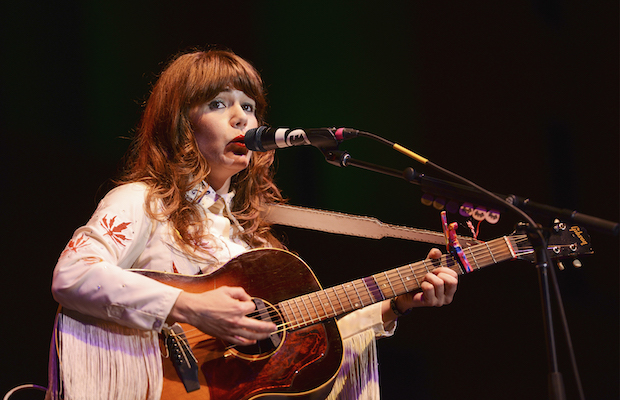 Last Thursday, Live on the Green continued what is shaping up to be an unbelievable 2016 season, returning for a second week on the heels of a fantastic debut with Andra Day, Allen Stone, and White Denim. Now in its eight season, we’ve been bringing you coverage of LOTG for as long as we’ve been around, and delight each year in getting to enjoy world-class artists, including many locals, alongside 10s of thousands of enthusiastic fans of all ages and walks of life. Years after year, the festival continues to innovate and impress us with its unbelievably well-curated lineup, and this year’s slate is no different. In one of the most-anticpsted weeks of 2016, touring acts Jenny Lewis, Passenger, and JR JR shined bright for week two, drawing one of the biggest crowds and leaving one of the most lasting impressions of any LOTG performance we’ve ever seen! Check out our review and photos below.

When I attended the Live on the Green announcement party a few months back, I was blown away by this year’s bill, and Jenny Lewis, above all, topped my list. Between her Voyager tour, special Rabbit Fur Coat show at The Ryman, and recent festival appearances, I’ve seen the famed songstress plenty in recent years; she’s not only a very cool, big-name get for the fest, but also an artist I could watch 100 times and still find myself throughly entertained and mesmerized by. Paired with popular, complimentary and distinctly different performers Passenger and JR JR, a smart move by the LOTG team, I knew this week would see a huge turnout, rainy weather be damned, so I arrived early to get settled and get ready for the night of fantastic music to come. 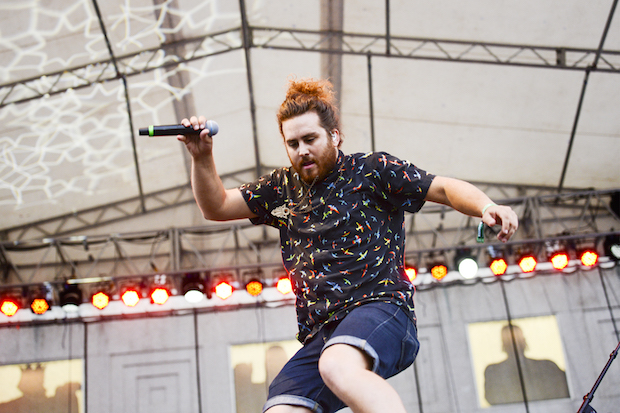 We’ve talked about it before, but JR JR, until a couple years ago known as Dale Earnhardt Jr Jr, were the band that inspired editor Matt Hall to originally found this site, returning to Nashville after some time spent living out west, to discover that the band he thought had so much buzz were barely making a dent yet in Music City. We’ve seen them plenty of times since, that show an eternity ago, and both the site and the band have grown and changed a lot over the years. Still, they’ll always hold a special place in our heart and our history. Along with the name change, the group, who enthusiastically proclaimed LOTG to be their “favorite festival performance ever” partway through the set, have shifted in a more pop-centric direction, slowing evolving from their weirder, indie early days. This was perfectly highlighted when they played “Simple Girl,” the song that first attracted early buzz, second in the set, before moving on towards bigger, anthemic, crowd-pleasing cuts, eventually concluding with a huge, singalong-primed, extended take on breakout 2015 single “Gone.” With the backing of a full band, the duo, seasoned from years on the road, are certifiable rock stars nowadays, channeling their diverse array of influences into a huge, uncontainable, and endlessly fun live show, their energy high as they traded off instruments and climbed from the stage into the crowd. This was by far the best JR JR show I’ve ever seen, unquestionably one of the best openers in LOTG history, and, from the look of the crowd response, a well-earned second wind for an old favorite with a brand new name. 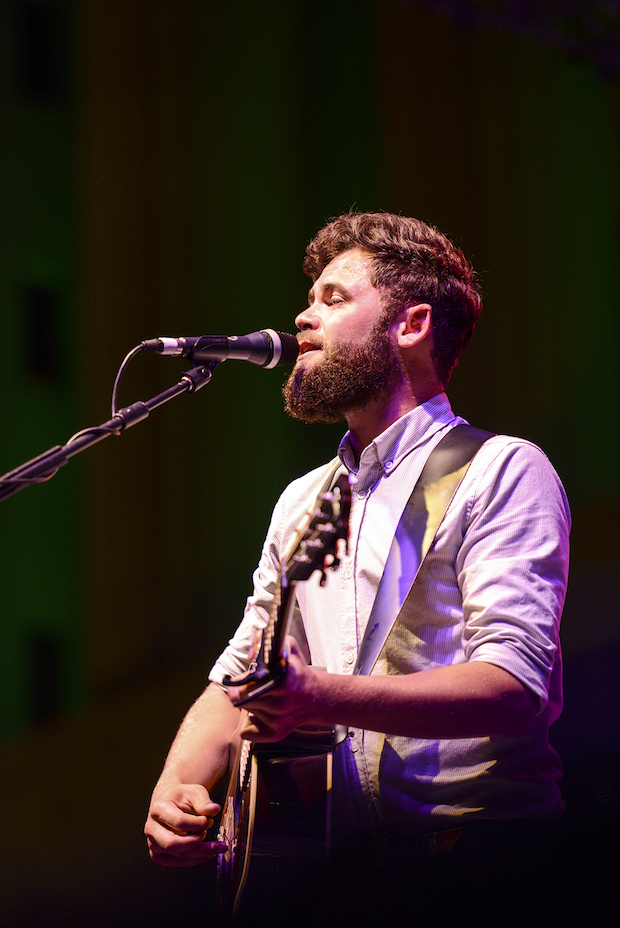 JR JR’s set wrapped a few minutes early, so the wait for Passenger felt extra long, especially excitable fans camped out in the front visibly brimming with excitement and screaming at any potential sight of the acclaimed singer. I knew that Passenger was the solo vehicle for British singer-songwriter Mike Rosenberg, and I knew that in Nashville shows past he’s played alone, but it’s been a couple years and a couple of albums since, leaving me curious to see if he’d bring on a full band as many peer solo acts have seemed to do. Nope, it was pure, 100%, unaided Mike, who set the tone for the performance by managing to drop an f-bomb, poke fun at himself for only having one hit, and explain to the causal fans that if they thought Passenger was a band, they might be let down, all in the first minute. This levity and charm would run throughout the singer’s generous set, which pulled heavily from breakout 2012 effort All the Little Lights, but managed to feature cuts from the span of his prolific, short career, including some magnificent new songs from the upcoming Young as the morning, old as the sea. It’s hard to capture the attention of thousands of people with only a guitar and and a voice, and doubly so at a show where at least a portion of the crowd might be unfamiliar with your music. Mike Rosenberg absolutely captivated from note one, delivering an earnest, sad, moving, and fun set, connecting on a personal level and letting the strength of his talent do the heavy lifting. Of course the high point, as Passenger admitted at the start, was breakout single “Let Her Go,” eliciting a singalong so loud it nearly drowned out the stage. As someone only casually familiar with Passenger going in, I left impressed and won over, adding his upcoming LP to my most-anticipated list for the fall. 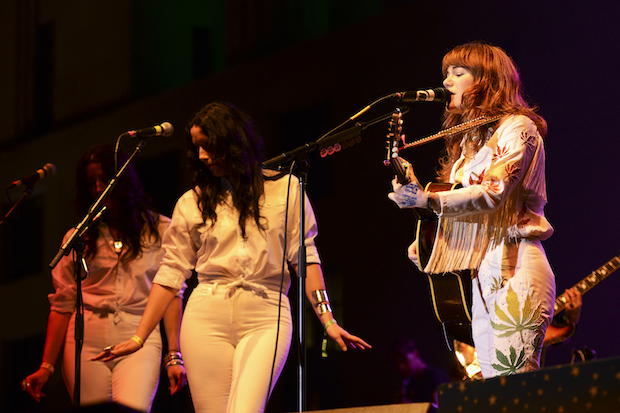 I saw Jenny Lewis at Forecastle Fest and in Nashville at Marathon Music Works (as well as an acoustic show at William Collier’s beforehand) in 2014, part of the magical, transcendent cycle for her unbelievable third album The Voyager, and earlier this year at The Ryman (after which she also played a benefit at The Basement East), for the 10th anniversary of her debut Rabbit Fur Coat. A fan since her Riley Kiley days, I could watch Jenny play night after night and still find something new and wonderful to take from it; one of the most moving, uplifting, and fun shows on the road today. While The Watson Twins are not, in fact, part of Lewis’s permeant backing band, Nashville residents would be forgiven for not knowing that, as the (now Nashville based) twins are always the “special guests” when Jenny hits Music City, adding their wonderful harmonies not only to Rabbit Fur Coat cuts, but throughout much of the rest of the set as well. There are two Nashvillians who are part of Jenny’s band though, guitarist Megan McCormick and pianist/guitarist/backing vocalist Tristen Gaspadarek, making this local outing all the more special. Trading in her signature rainbow Voyager jumpsuit for one decked out in rainbow pot leaves, Lewis opened the show on piano, before stepping out front and absolutely mesmerizing throughout, commanding one of the best, most moving, and wholly special Live on the Green sets I’ve ever witnessed. Her breezy style, badass attitude, and perfect harmonies had the packed field dancing, singing along, and allowing themselves to be transported by Jenny on a magical voyage, one filled with rainbows, love, acceptance, heartbreak, and honesty. Per usual, some Rilo Kiley tunes found their way into the set, as did plenty of Rabbit Fur Coat cuts, and though still heavy on Voyager songs, it felt like she’s finally winding down that cycle peppering in more balance, and, hopefully, looking forward to her next LP (one new song, the Fleetwood Mac-esque “Red Bull and Hennessy” found its way onto the set). Beforehand, I had speculated that this could secretly turn out to be a way to showcase Lewis’s new supergroup Nice As Fuck, who released their debut a few months ago, but aside from a cover late in the set, this performance was all Jenny, and she seemed humbled by the massive turnout, commenting that not only was it her biggest Nashville show ever, but one she never dreamed of graduating to. By acoustic closer “Acid Tongue,” capping out perhaps my favorite Live on the Green performance throughout the five seasons I’ve attended, Lewis invited back her band and The Watson Twins, along with guests and local favorites Nikki Lane and Jessie Baylin, to sing choir style backup on the fan-favorite tune, reinforcing my belief that not only is Jenny Lewis one of our generation’s most gifted performers, a true legend in the making, but also that Live on the Green is such a special, unrivaled, and unbelievable concert series, and one we’re so fortunate to have year after year.

Live on the Green continues this Thursday, Aug. 25 with an impressive lineup of Dawes, Kurt Vile & The Violators, and The Record Company. Keep an eye out for a full preview later this week, along with our coverage after the show. And, as always, head to LOTG’s site for more info.