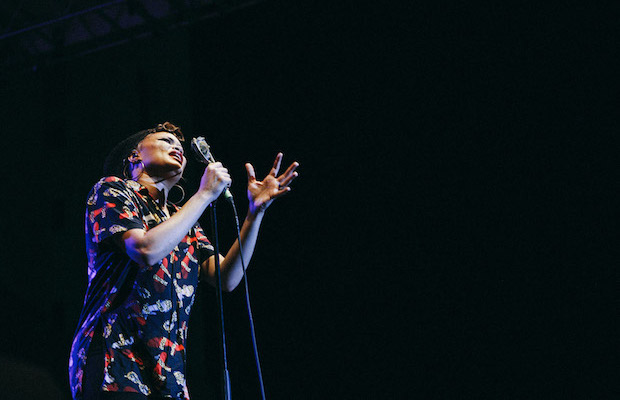 Last Thursday, Live on the Green triumphantly kicked off its 2016 season, marking the beginning of the annual, free fest’s eighth year, and third since adopting its current four week format. We’ve been bringing you coverage of LOTG for as long as we’ve been around, and delight each year in getting to enjoy world-class artists, including many locals, alongside 10s of thousands of enthusiastic fans of all ages and walks of life. Years after year, the festival continues to innovate and impress us with its unbelievably well-curated lineup, and this season is no different. Boasting a diverse trio of touring acts, White Denim, Allen Stone, and Andra Day, Live on the Green’s inaugural outing was a strong start, and left us eagerly anticipating the rest of the season. Below, check out our review and photos!

While the last couple of years of Live on the Green have marked changes, moving from a six week to a four week plus long weekend format and adding a second stage to the later shows chiefly among them, along with updates to VIP tickets, site expansion, and more, 2016 seems to simply be doubling down on what works so well. This year boasts returning performers, a slightly earlier starting week, and all of the free fun, local flair, vendors, and everything else that you love, thanks to our wonderful city and the fine folks at Lightning 100. Entering Public Square Park as the afternoon moved towards evening, I was greeted with a comforting sense a familiarity and fast-filling field of enthusiastic music lovers. First on the day’s bill: White Denim. 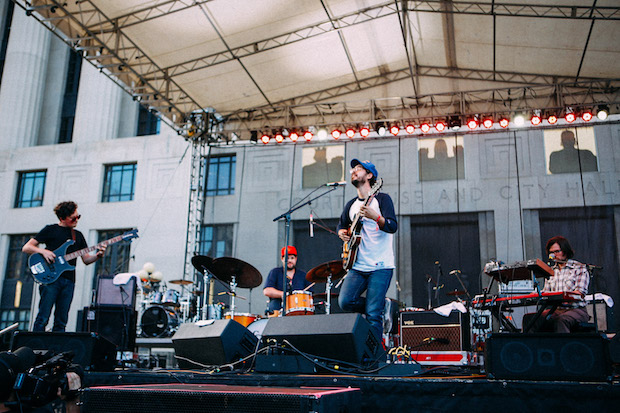 Even though I’ve not only listened to White Denim plenty, but have also even seen them in concert before, I still have an inner perception of the band that doesn’t quite match what they really sound like. I’m not sure why, but the fact that they’re something of musical chameleons is surely a contributing factor. I personally missed their set at Forecastle Fest last month, so I was thrilled to get another shot at seeing them play tunes from their stellar new LP, Stiff. While some of the folks there specifically for the evening’s later acts might have been caught off guard, there were clearly a lot of White Denim devotees in attendance, and it was fun to watch people lose their minds as the eclectic band blasted through a set of songs new and old, navigating the waters of psychedelic rock, experimental, indie, jazz, progressive, punk, and soul. It’s been a bit since I last saw the Austin group, and I see why my editor was especially raving about the band’s Forecastle set, because they’re sounding better than they ever have. Easily one of the most energetic opening sets I’ve seen at Live on the Green, the hard to label rockers set the bar high not just for the evening, but for the whole season, and swiftly reminded me what makes this festival so special. 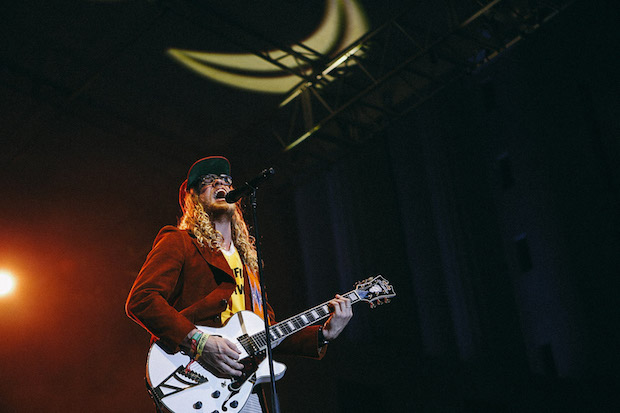 The crowd was swelling and the sun was setting as Allen Stone took the stage after a quick changeover. As I remarked in our preview, for as often as Stone has played Nashville, and for as well-received as he is here, I can’t believe it took this long for him to wind up on the LOTG lineup, but I’m surely glad that he did. The young singer’s ability to channel a classic soul sound is huge beyond his years, his voice and guitar work the making of a modern legend, and his Live on the Green set, like every Allen Stone show I’ve ever seen, did not disappoint. Backed by a talented band, Allen worked his way through familiar cuts, delighting and uplifting as the crowd seemed enthralled by his every song. Though insightful and socially aware, Stone still performs with a palpable sense of joy, conveying a unique sense of authenticity and humble spirit, mixed with a seasoned polish in his unrivaled skill. Though clocking in at a generous hour, his performance left me thirsting for more; calmed, hypnotized, and filled with soul at this wonderful outdoor respite amidst a busy week. 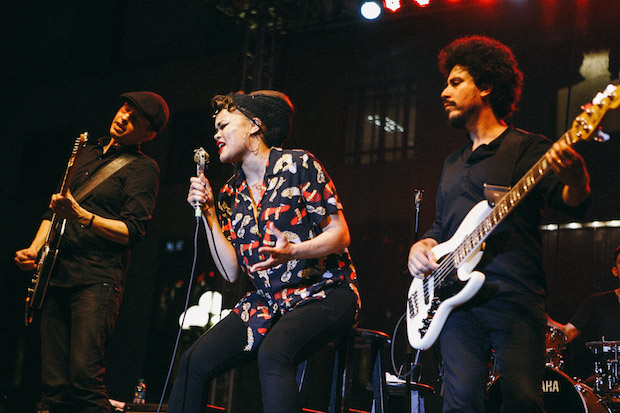 After a short speech from our wonderful Mayor Megan Barry, an enthusiastic supporter of Live on the Green, as well as the final introduction of the night from our pals at Lightning 100, it was time for the evening’s headliner, Andra Day. Day might still be just shy of being a household name, but we have a feeling that’s about to quickly change; her headlining slot was certainly no fluke. Like Allen Stone, and mirroring recent rising stars like Leon Bridges, Day’s sound is timeless, and her innate soulfulness and skill defies her young age. With a funky and versatile backing band, she eased into her set sitting down, before leaping up, grabbing the mic, and commanding the stage, indicating to the audience that this would be something special. Swept up in the welcome recent resurgence of popular r&b, Day boasts a voice that begs for her to be counted among the greats, and her poignant social message, landing at a time when things around the globe are especially turbulent, makes her music feel all the more urgent and necessary. Backed by a versatile, funky, and skilled band, Andra played cuts from her Grammy nominated 2015 debut, Cheers to the Fall, prompting me to wish I’d given it a few more spins, because this tunes are simply gorgeous. Present too were some songs I hadn’t heard, spoken word interludes, empowering and urgent messages of inclusion and awareness, and so much more. The whole performance was really something special, but the high point for me, perhaps because it felt so surprising, was a cover of Kendrick Lamar (I looked it up, and she released a studio version months ago, but it somehow totally slipped by me). Really showcasing her unique voice and personality, she made the song her own, exemplifying the essence of her artistry. I went in a casual Andra Day fan and left a devotee, moved by her fantastic performance in what, it seemed, was a shared sentiment all across the park. Thanks, Live on the Green, for constantly proving why Nashville truly is Music City, and I can’t wait for the rest of the season!

Live on the Green continues this Thursday, Aug. 18 with a stacked bill of Jenny Lewis, Passenger, and JR JR. Keep an eye out for a full preview later this week, along with our coverage after the show. And, as always, head to LOTG’s site for more info.