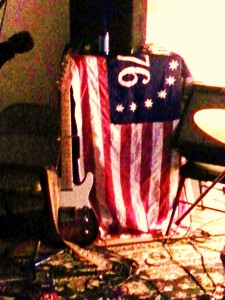 We East Nashvillians begin the process of dragging out the boxes of flip-flops and beach chairs during the first week of June. Living in old houses, it’s very difficult to find storage space. Part of the celebration includes dusting off skeletons of last year’s brown recluse spiders–while discovering a few live ones.

School is over. Produce is arriving. Vacations are here. New albums are dropping. Ah, Summer activities. Ships begin their ocean voyages of summer by busting a bottle of champagne against the bow for luck. Nashville’s version of this traditional public christening includes a lovely crowd with two giant kegs of beer in the back of a beat-up truck. That’s what was happening at this house concert Sunday night. The fact it was also a giant birthday gathering, with kick-ass bands, made it even better.

I found out about this ridiculous concert while digging around last week. I believe that houses are the most unique and fun out of all performance venues in Music City. Don’t get me wrong, I love and appreciate our well-known local venues, but the raw experience of being inside a random house, rubbing elbows with great artists, and the horrible smell of body odor and dried beer stains on a Goodwill shirt add artistic pizzazz unlike anywhere else. It’s intoxicating—in more ways than one. There isn’t anything more real than getting in a small, LOUD room with like-minded people. Yeah, what do I know..I just wrote about the Nashville Symphony and I play classical music….blah blah blah..but check it: 21st century chamber music is what these F**KIN house concerts are, regardless of the genre. Music is the artwork and the venue is what frames it. Sizzling guitar and true grits are SOULFOOD.  You are gonna love all the shitty pictures I took….sound was abundant and light was scarce. 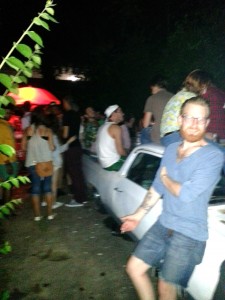 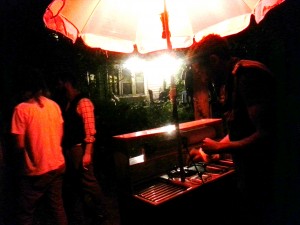 Does this article feel like déjà vu?  You are absolutely right. Again, Jonny Rizzo (Lead Singer of Beef Oven) was the host of the event, along with kegmaster, Giovanni Costa. I had no idea that the first article I ever wrote was also the first party/concert he had ever thrown! Awesome.

Kin Ship started off the show with a breezy-edge of surf-folk-rock and indie flair. It’s strange to me how a band from Ithaca, NY (and has now been in Nashville for about a year this month) plays with such sweet heat. Ithaca is a not-so beachy area. But they do it well. If they claimed to be from the beaches of Cali, I would have believed them! The folky-rock part of their style sounds similiar to the late ’60s band, Edison Lighthouse. There is definitely influence of the Kinks, too. I like that their music rolls effortlessly through the ear. They released their album, Where Iover the 2012 holiday season. You should celebrate Christmas in July by purchasing it. It’s great music to listen to while sippin’ that strawberry daiquiri by the pool.  Listen below, and BUY IT HERE. 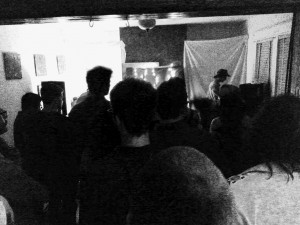 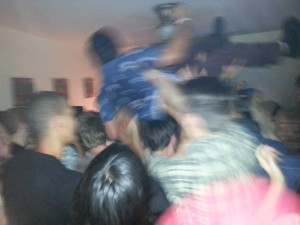 The next two bands, Beef Oven and The Boohags, were pretty much the same personnel. I’ve talked to you a little about Beef Oven. They are a surf-trashy band from California. When their friend, Geo Navarrete, joins them, they become the Boohags. The band mixes the glass bottle pieces, cigarette butts, and shit that washes up on the grimey beaches of the Cumberland River with grindy-goodness of surf rock. Have you heard of our local word for tap water? It’s “CUMBERLAND PUNCH“. 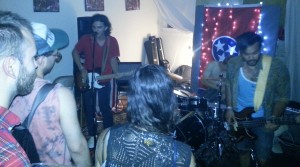 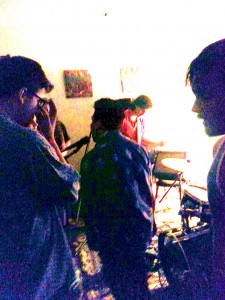 I don’t believe that’s a band name yet if you want to use it…or maybe as an album title, Jonny Rizzo?! Navarrette is a really charming, funny guy. When he sings, it’s as if Ritchie Valens decided to drink a Sex on the Beach instead of tequila. That’s him with the blue shirt crowd surfing, in the photo above. Haha. I can’t get you a recording of this dude yet, but if you ‘LIKE’ Beef Oven on Facebook, that’s the best way to find out when another house concert is happening. From what Jonny tells me, there’s another one soon. Don’t miss it. Listen to Beef Oven. 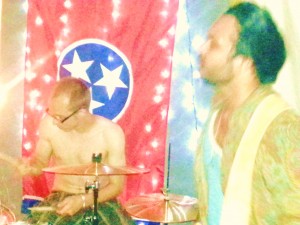 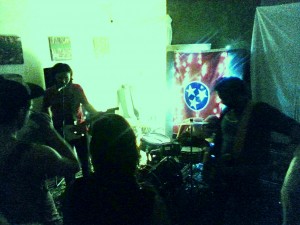 The crowd was gettin’ happy at this point. Take a look at their faces. In the darkness, I just pointed and clicked. I have no idea who the girl with the face is, FUN. We were all getting ready for the final two guests of honor, Ranch Ghost and Clear Plastic Masks. You might have heard of Ranch Ghost before..they were one of the winners of Mercy Lounge’s Road to Bonnaroo. Worthy champions. 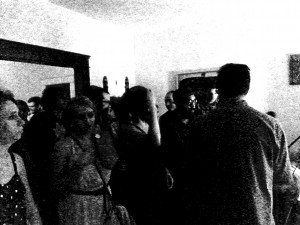 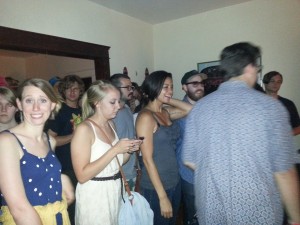 Why Ranch Ghost hasn’t received a shit-ton more attention than they have—is beyond me. Is it because they have this mystique of colorful lights and singing behind white-sheets thing goin’ on (Ex: Road to Bonnaroo performance)? Pay attention to those men behind the sheets. It’s not a mirage—it’s quirky cowboy jangle rock. Think Mick Jagger dancing in boots and tighty-whities. During this house concert the floor was going crazy. 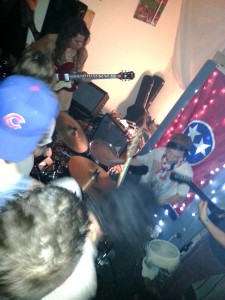 They are all about attitude and twang. Even their band title and logos on merch are written with squiggly and prickly lines. Ranch Ghost has marvelous, corkscrewy, American West-like vibrations. There is no doubt in my mind when they play Bonnaroo, Nashville will be seeing a HELL of alot more of them. Exciting!

The night ended with the bluesy-rock band, Clear Plastic Masks. Like Ranch Ghost, these guys haven’t gotten enough attention in Nashville. I love them! They came from Brookyln, sounding as though they took the scenic route through the New Orleans delta-blues to get here. Hearing them after three surfy-bands and a Western-psyche ensemble was interesting. It was like a journey through all the nooks and crannies of the USA. From Cali to NY and West to East.  I thought it was a nice way to end the evening. You can catch Clear Plastic Masks on July 11 at The End.

It was certainly a great group of bands. What a way to start the summer! 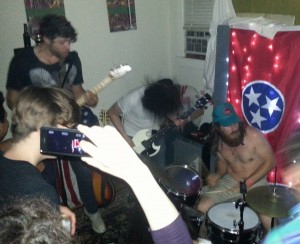