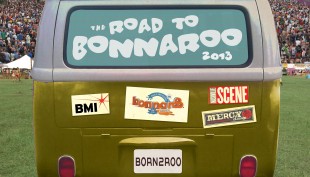 We spent last night at another capacity crowd for the second installment of the 2013 edition of Road To Bonnaroo at Mercy Lounge.  We’ve been judging this event for a while now, and, honestly, last night was one of the more evenly balanced bills that I have seen in quite some time.  For those of you not familiar, Road To Bonnaroo is a crowd and media judged event with 8 bands duking it out with three song sets for the privilege of performing at the Bonnaroo Music and Arts Festival in Manchester this June.  Click below to read about our full coverage of the evening.

As a matter of fairness, the set times are drawn out of a hat about 30 minutes before show time as an attempt to keep the crowd objective.  The prime slots are typically the middle of the event after the venue has filled up, and before the beer puts the crowd to sleep.  Our rundown of the event is in the order of performance.

We’ve long since been fans of Vinyl Thief.  The straight ahead indie rock sound is reminiscent of Cold War Kids, but their stage presence is something all it’s own.  In the dozen or so times I have seen VT, I’m convinced that front man Grayson Proctor’s frenetic moves are going to land him in the crowd or the hospital.  It was all channeled last night though, in one of the best sets I’ve seen from these guys.  The fans agreed given they placed second in the popular vote.

We’ve seen Ranch Ghost at venues like The End and The 5 Spot already, but this was the first time we’ve seen them with any real production.  The set started out behind a giant light blue and white flag.  Since most of the crowd is milling about and not paying attention to the stage set up of each band, the folks around me were a bit confused with what was going on, but their mix was definitely the best of the night.  By the time the flag dropped, the normally fickle Nashville crowd was at full groove to the solid psychedelic rock sounds.  Ranch Ghost took home the judges crown, and placed fourth in the popular vote.

Next up was, the new to us, Shannon LaBrie, and she represented even more of the diversity in the Nashville music scene.  Her soulful stylings were great and a nice change of pace for the night, but it was a tough sell following Ranch Ghost.  The anticipation of Ravello didn’t help her cause either.

You know we are fans of Ravello.  Andrew just sat down with their new record, Nostalgia, and you can check out that review here.  As with all the performers, they brought their A-game to the Mercy Lounge stage for Road To Bonnaroo.  It’s a straight up rock and roll bad ass good time.  If you haven’t gotten out to see them yet, you should make a point of it.  I’m still a little shocked they didn’t claim the throne last night.  They did claim the popular vote, and clocked in second in the judges voting.

Next up, is the frenetic electro-pop group, Hanzelle.  I would never claim to blame the sound guys who are working their asses off to keep up with the fast paced frenzy of RTB, but there was something amiss in Hanzelle last night.

In the sixth slot, Little Bandit had a pretty incredible set that was a real change of pace after the electro-pop madness.  We’ve been keeping up with Little Bandit for a while now, and it was exciting to see them live for the first time.  The judges in the crowd felt the same way voting them into 3rd place in their poll.

Next up was the always fun Blackfoot Gypsies.  It’s hard to vote against the two piece rock machine.  It was tight.  It was loud.  It definitely brought the devil horn fingers out of the still packed crowd.  Unfortunately, a pedal broke or a cord was pulled or something, and we went through about a minute or two of just drums, and that makes a lasting impression in a two-piece.  Regardless, they still garnered 3rd place in the popular vote and 4th in the judges voting.

Things rounded out with Andrew Combs.  The final slot at Road To Bonnaroo is usually a grim sign as the crowd has thinned out by that point.  Combs was a true professional about it, stating “the best part about playing last at Road To Bonnaroo is that you can get drunk.”  That brought some laughs to the meager at best crowd, but they were absolutely solid last night.  I’ll put Andrew Combs on my list of people to see again, hopefully, at a more reasonable start time.

Again, our congratulations to Ranch Ghost.  We’ll see you guys on the farm this summer!  As a treat for you readers that made it through this rant, check out Ranch Ghost’s “New News” below.