A Far Out House Concert: The JAG, Beef Oven, and Kinship 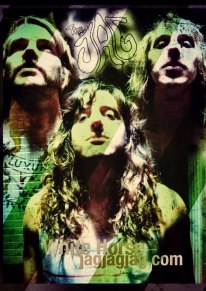 Hello, y’all. My name is Tia. I’m a native Nashvillian and a musician from the East.

I’m new here at No Country—it’s a pleasure to meet ya.

I absolutely, positively, LOVE a man in bellbottoms. Sweat and polyester. Meeooow.

I have a theory that the louder the music is–the tighter the pants get. What could be better than that? Not just one..two…or even three…but FOUR gents fitting this description is the reason I crossed the river and went hiking up a dark, crooked street toward a Christmas light decorated porch last Sunday night….

Yes, I’m talking about The JAG. Remember them from our post back in February? Originally they were Mississippi boys, now they live here. Before you curl your lip at the fact they aren’t natives, consider our friend Linus Hall, owner of Yazoo who made the same voyage almost 10 years ago. You have a bottle in your hand, don’t you? The Weeks, a band buzzing with local popularity lately–Ditto. Mississippi has been goooood to us. 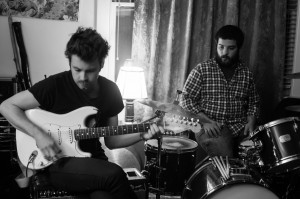 As I walked up a cracked, tilting sidewalk, my feet bumped into a raggity-ass couch that was positioned at the perfect angle to light up a smoke and prop your feet onto a pollen infested parked car. I plopped down on it to talk with some of the other attendees while sounds of Kinship, the first group, were closing the set with a highly enthusiastic audience. 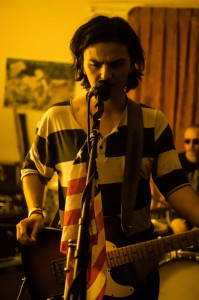 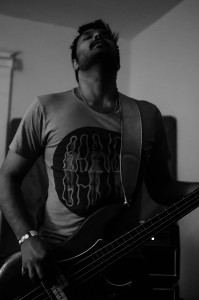 The house show was hosted in part by Jonny Rizzo of the group, Beef Oven. Don’t even try to Google them. You’ll come up with Ludwig von Beethoven or grandma recipes from Southern Living. They do have a Facebook Page with raw meat as the profile picture. I feel like washing my hands twice just looking at it.

Jonny and his band mates Jason Gilmore and Alex Cusik are super-newbies from Riverside, California that describe Beef Oven as ‘surf-rock mixed with blues, but gritty’. I’d call it beachy-grunge, like a Malibu Barbie with tattoos and a nose ring. The only sample available at this point is one they recorded in their home with a BUILT IN computer mic. That’s pretty janked up by Nashville standards, yet somehow it adds salt to their dirty arrangements. “Fake Palm Tree” is worth checking out:[soundcloud url=”http://api.soundcloud.com/tracks/28124031″ params=”” width=” 100%” height=”166″ iframe=”true” /]

As I stood in the crowded bungalow, swirling tones of psychedelic rock floated in the air to accompany a voice that takes us to the era of The Guess Who, Steppenwolf, and Jefferson Airplane. Listeners circled around the band to sway and sing along because Aaron Tyler’s bangs demand eye-contact, baiyatch. I swear I saw them flutter in tandem with the vibrato in his voice. BwahWAHwahwahwahwahwah. 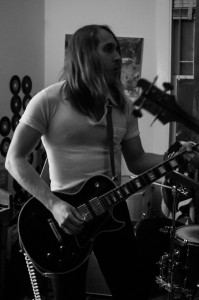 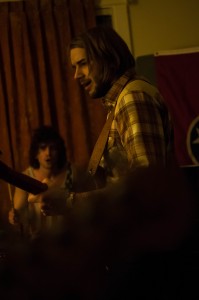 Joe Regan, givin’ us the bends. Gant O’Brien serves the bass in yo’ face. JAG Swaggaaaz.

The JAG tips their hats (well, HAIR) to the Mississippi blues for a mellow contrast against edgy guitar riffs. Their recent album Mississippi Acid Pine Highway Tour (2012) is an incredible kaleidoscope of colors mirroring retro and modern influences. In their song, “White Horse”, the lyrics submerge you into to the fantasy, surrealism, and meditative qualities we love about the late 60s-early 70s. “Talk At Me” blasts a crunchy rock melody supported by confrontational bass lines. Hoochie Koo, Gant…

I’m already feeling a little JAG-Lagged…can’t wait for another show. Their next performance will be at the Eastside Hootenanny, a new East Nashville music fest, on May 18th. Until then, close your eyes and dive into the JAG. Mr. Tambourine Man will surf on a voluptuous swell of rock and roll alongside you.

Special Thanks to Matt Weems of Matt Weems Photography for contributing the photos from this concert.