Like they say in that one beer commercial, Here We Go! It’s been a crazy busy week for all of us here at No Country. Between the East Nashville Underground hangover and all the preparation for the Beck Song Reader Anniversary Party next weekend at The Basement, we haven’t had much time to sit down and write for you. However, it’s another weekend in Nashville, and we wouldn’t leave you hanging. We have the full rundown to get you ready after the jump. Get out and see some live music!

Tonight, The Basement plays host to Shark Week w/ Ethan Ballinger and Young Summer. Shark Week are rowdy, blues-informed punk rockers from D.C. that win the award for “greatest band name ever.” Shark Week’s high-octane brand of blues-punk is equal parts Black Keys, The Clash, and The Fratellis, and, like Shark Week on Discovery Channel, is sure to deliver thrills. Shark Week is supported by fellow D.C.-native Bobbie Allen, whose project Young Summer is actually a collaboration between her and Nashville songwriter Trent Dabbs. Young Summer has only released two songs to date, but both are elegant, heartbreaking, and feature Allen’s beautiful voice as the centerpiece. Allen’s voice is like silk-like — ethereal, yet stronger than steel — and in addition to Florence Welch and Sarah McLachlan (the common comparisons), I’d compare it to Laura Warshauer and Ellie Goulding. Moody Nashville singer-songwriter Ethan Ballinger rounds out the bill. Tickets are $5, and the show starts at 9.

At this point, we’ve seen James Wallace & The Naked Light more times than we can count, yet we still jump at every chance to catch the dynamic rockers when they perform in town. If you missed ’em at last month’s Thunderbitch show, you missed one of their best shows yet. Tonight marks their first Nashville performance since the release of their new record, More Strange News from Another Star. Rounding out the bill are fantastic Americana singer-songwriter Frontier Ruckus and bluesy Nashville rockers Fox Bear Snake. Things get started at 9, and you can grab tickets here or at the door. Don’t forget to brush up on your James Wallace knowledge by reading our recent interview.

Good news for you Avett Brothers fans who also happen to be procrastinators. Not only are there still tickets available for the group’s Bridgestone Arena show, but they’re decent seats (and decently priced). If you’ve never had a chance to catch the North Carolina folk rockers live, you’re sorely missing out on one of the most fun and energetic live shows around. They channel the spirit and energy of a punk band, and, even in a huge room, make every gig feel intimate and unique. Sure, the big indie folk scene is getting a little crowded, but the Avetts did it first and they still do it best.

I’ve said this before, but a serendipitous night with Bobby Bare, Jr at The Basement a few years ago actually helped to persuade me to move here.  This is  the same reason why we are celebrating our second anniversary at The Basement next weekend.   In the meantime, you can check out Bare, Jr, who has wisely paired up with another one of the best alt-country (with a twist of humor) acts in Nashville, Birdcloud. Things get started around 9pm, and tickets will run you $8.  Check out one of the Bare, Jr. classics below.

Pining for some indie-folk that’s a little less Mumford and Sons and a little more Wilco? Look no further than The High Watt this Saturday night, which will host Belle Adair, Grass Root Kids, and Schools. Belle Adair and Grass Root Kids are producing some of the most thoughtful, emotive, and fresh folk-rock in the modern South — Nashville Scene compared Belle Adair’s debut EP to “Sea Change-era Beck or post-Summerteeth Wilco,” and Grass Root Kids’s folk-influenced, Arcade Fire-tinged indie-rock is deliciously novel and exciting. Bowling Green, KY-based band Schools are set to kick things up a notch (or two, or three) with some good-old-fashioned brash, snot-nosed rock that brings to mind fellow Bowling Green outfits Cage the Elephant and Sleeper Agent. Tickets are $8, doors are at 8, and show starts at 9. 18+

[UPDATE: CANCELLED DUE TO WEATHER]

As if the East side wasn’t cool enough, we have The Eastwood Ensemble, an underground chamber ensemble run by our very own writer, Tia, who is the founder/director/a musician. Eastwood Ensemble is comprised of symphony and session musicians who volunteer to raise funds and awareness for non-profits and causes in East Nashville. Now, before you say, ugh Classical?! You’ll be happy to know that this is no ordinary chamber group. No bowties or pearls are allowed. Are you curious? Do you like old houses with kick-ass music? Do you like strong drinks? Well, They are putting on a concert called CHAMBER MUSIC UNDERGROUND at Top O’Woodland to raise funds to complete their non-profit status. For only 22.00 (and for a good cause), you’ll get a special punch by Lockeland Table, homemade chocolate candies by Kismet Candy and hear the most incredible music from early classical to modern TN. The house is one of the most beautiful in East Nashville. It’s not going to be watered down cliche…The concert will sound as though Beethoven plays for the Black Keys. It’s 21 and Up, Buy tickets here.

If you’re looking for a bit of a non-musical way to spend your Saturday afternoon, we recommend checking out the Spring Market at The Stone Fox. Sure, there’s likely to be some performers throughout the day, but the real focus is a fantastic gathering of local artistans and venders. The Fall Market was a hit, and we’re betting this one will be even bigger. For a full list of venders, check out the Facebook event, and keep an eye on the The Stone Fox’s Twitter or Facebook for updates regarding weather.

Joining them on the bill is songstress Nikki Lane (who graces the cover of the latest issue of Garden and Gun), whose latest effort was produced by Dan Auerbach of the Black Keys. The same issue of Garden and Gun also features a cool compilation of 25 songs from Nashville up & comers (including Ms. Lane), which is available to stream for free on their website here.

You may have seen JTNL touring alongside Nashville rockers American Bang, Grace Potter and the Nocturnals, or the Black Crowes. If you dig homegrown, old school, dirty rock n roll (with kickin background vocals provided by Emotion “Mo’” Brown), you won’t want to miss this one. Check out their video for “Gypsy Woman” which was filmed in their hometown of Dallas below:

Or, for just $5, you can check out Lines in the Sky, Benjamin Loren, Telemonster, at Nashville Center Stage (right across the road from Cannery/Mercy).

Lines in the Sky are an alt/rock Nashville trio that snagged Deli Magazine’s pick for Emerging Artists from Nashville last year…and they deserved it. To boot, their latest effort was mastered by one of our favorite Nashville engineers, the incomparable Richard Dodd (Tom Petty, Traveling Wilburys). For fans of: Mute Math, Circa Survive, Muse. Check out their official video for “Threads” below. 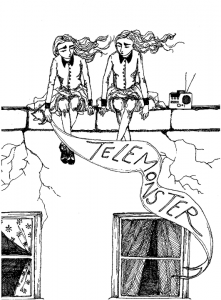 Chattanooga indie rockers Telemonster will make their Nashville debut, channeling influences from Death Cab for Cutie to the Shins. The 5-piece group combines pop hooks and melancholy guitar tones to create an auditory amalgamation that is certain to melt even the hardest heart. Bonus fact: our writer Lauren went to school with them for a brief time! For fans of: Death Cab for Cutie, The Shins, Modest Mouse.

Local experimental rockers Linear Downfall make up the third piece of this musical pie. Get ready to get psychedelic with a group that has not only shared the stage last year with The Flaming Lips but also recorded at WAYNE COYNE’S HOUSE. We’re jealous, and we love them. For fans of: The Flaming Lips (duh), White Dwarfs, King Crimson. 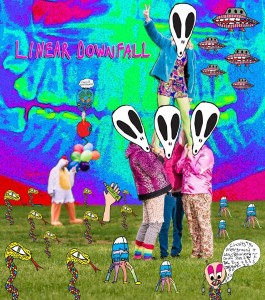 NYC pop/rock singer/songwriter Benjamin Loren rounds out this diverse lineup. As of Friday, he’s at the top of the charts on Noisetrade, so go grab some free downloads here! For fans of: The Beatles, Billy Joel, Elton John.

We’ll be live-tweeting and taking pics during this weekend of killer shows, so be sure you’re following us on all of our No Country pages. Now go see some local music!