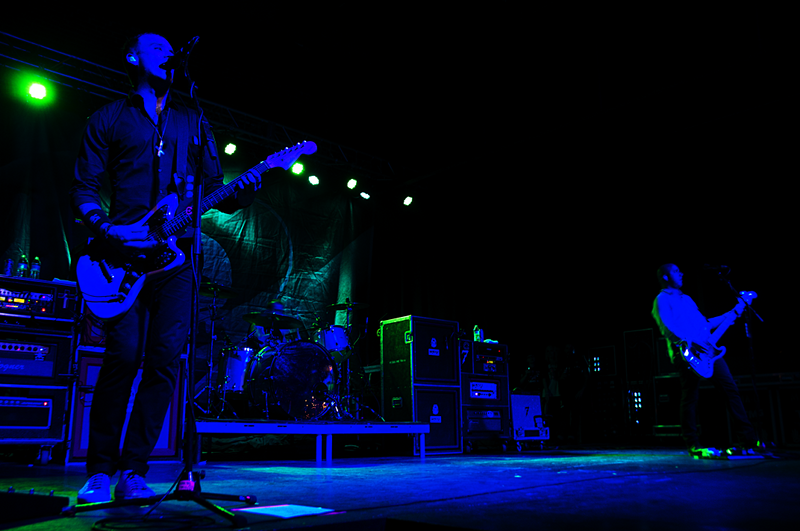 It’s been awhile since I last saw Alkaline Trio. In fact, I got a sense of déjà vu upon entering Marathon Music Works and catching a glimpse at the enormous Bayside backdrop onstage. Bayside opened last time as well, in the summer of ’08. At that time, Alkaline Trio was touring in support of the mostly forgotten Agony & Irony. A lot has changed in the years since. In many ways, Alk3 (as fans so lovingly abbreviate) have come full circle as a band. As a longtime fan, I’ve always rooted for them to reach a point of career renaissance and, after Sunday, I can inarguably assert that they’re the strongest they’ve ever been.

I arrived just as Minneapolis punks Off With Their Heads were winding down. Admittedly, I’m not especially familiar with the group (who are labelmates of Alkaline Trio), but I was immediately impressed with the energy and ferocity of their delivery. It’s refreshing to catch openers that were selected because they not only fit, but also complimented the bill, and OWTH set the tone for a great night of punk rock. They’ve been gaining a lot of cred in the punk scene over the past few years, and I highly recommend giving their latest album, Home, a spin.

I’ve long maintained that Bayside are one of the most consistent bands in the scene. Always hovering just below the surface of mainstream appeal, the group have never produced anything less than fantastic in their past decade of releases. Through touring relentlessly and never comprising their sound or approach, the Queens, NY-based band have built a dedicated and loyal following. While very similar to Alkaline Trio in style, Bayside are an example of how a band’s approach to live performance can differ drastically. Alk3 are fine-tuned, calculated, and faithfully able to reproduce each song as it was recorded. Bayside are bombastic, breathing an intensity and heaviness into their music in such a way that, as a live band, they’re almost a different entity entirely. It’s not that the songs aren’t being done justice; in fact, quite the opposite. Bayside’s live show is a transformative, high energy, and compelling feat that just couldn’t possibly be replicated in the studio. If you haven’t seen them live, you’re missing out on a huge part of what they truly have to offer. 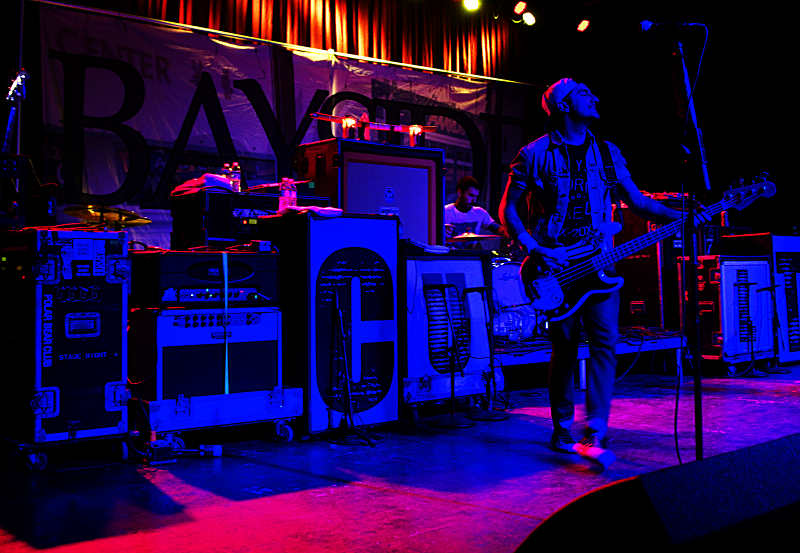 The group played a set fit for Warped Tour: brief, high energy, and stacked with fan favorites. Surprisingly, they didn’t draw much from their latest release, Killing Time, but ending the performance with my personal favorite “Sick, Sick, Sick” was redemption enough. Unsurprisingly, the night was heavy on tracks from their seminal self-titled album. Nearly a decade later, songs like “Devotion and Desire” and “We’ll Be O.K.,” which run the risk of sounding stale or outdated, still land as energetic and relevant they were they day they came out, a feat owed largely to Bayside’s incredible performance chops. Covering The Smoking Popes’ “Megan” was a nice touch, and rounded out a set where my only complaint was how quickly it ended. Overall, this was the best I’ve ever seen Bayside, and that’s saying a lot. They’re a tough act to follow, but Alkaline Trio held their own. 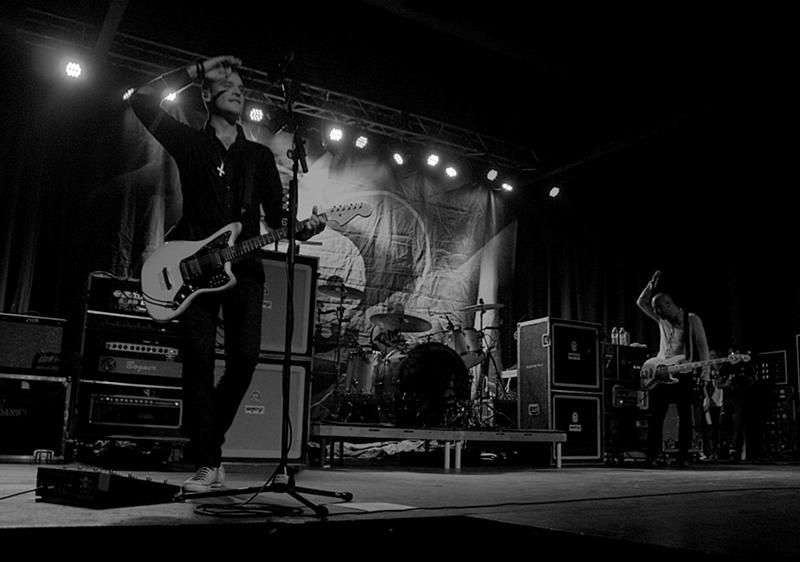 In the five years since I last saw Alkaline Trio, the band has released three albums (four if you count acoustic compilation Damnesia), partnered with Epitaph to form their own record label, faced the passing of frequent producer Jerry Finn, and have remained a pop punk stronghold in a music scene where the genre has largely disappeared from the echelons of pop culture. On a personal level, frontman Matt Skiba has gone through a divorce then another messy breakup, and he and his bandmates have faced various other personal and familial struggles. For most groups, this would all be a catalyst for change. For Alkaline Trio, it’s just the right balance of progress and adversity to jumpstart a new phase of their career more parellel to their earliest beginnings. Finally channeling the passion, focus, and angst that won over so many fans at their genesis, the band has never sounded so fresh or true to its roots.

Alkaline Trio have always been a great live band, even before their style or success level had evolved to a point where they needed to be. One glance at their stage setup (a line of Orange amps, in-ear monitors, top-notch and meticulosity placed gear, and a samurai sword for good measure), and I knew I was in the for my best-sounding Alkaline Trio show yet. In contrast to the approach taken by Bayside, Alk3 have become something of perfectionists in recent years. A far cry from their lo-fi, Blink-182-esque beginnings, the band faithfully recreates every note, every harmony, and every keyboard flourish (with the help of samples) in stunning and flawless clarity. Marathon Music Works is effectively a big empty warehouse, not especially conducive to big, loud rock bands- yet Alkaline Trio made it sing.

Decked out in his trademark head-to-toe black, and sporting a touch of eyeliner, Skiba launched into latest single “She Lied to the FBI” to kick off the set. He and bassist/co-frontman Dan Andriano have always had an unparalleled chemistry, able to check egos and balance their distinctly different writing styles and shared vocal duties in a way that always benefits the band before the individual. Live, their harmonies and interplay are perfect. Rounded out by powerful drummer Derek Grant, the Chicago punks are one of the most precise, electric, and mesmerizing threesomes in a genre full of them. The energy level was unstoppable, the momentum never-ending, and the raw emotional weight behind every track seeped into the audience, lyrics hanging on the lips of every insatiably passionate fan. 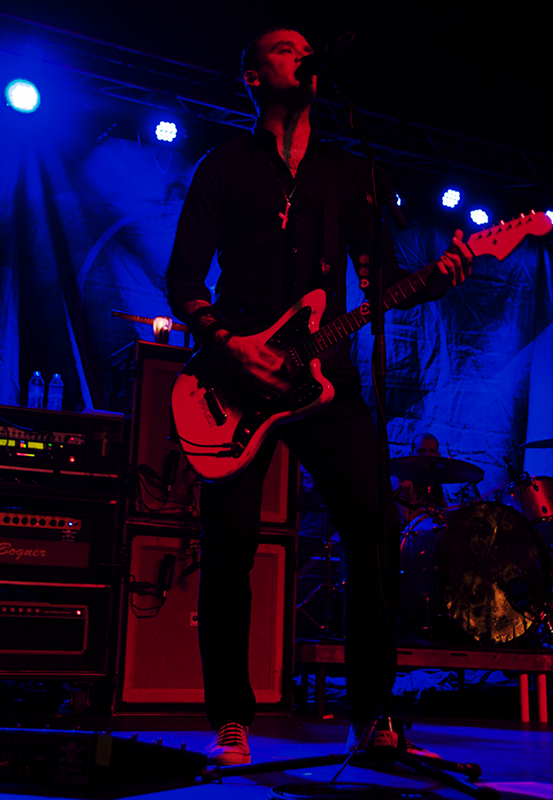 Accentuating the point that the group has come full circle, Alkaline Trio’s set was stacked with old and new, and not much in between. Over a solid ninety minutes, Alk3 played a healthy batch of songs from their latest, and most personal release in years, My Shame Is True. The Trio have always been to the pop punk scene what The Cure were to post-punk; the angsty, heartbroken goth kids who don’t quite fit in. Though their image and sound strayed for a few years, Shame has fully cemented that position once more. They’re not a band with “hits,” per se, but there’s still a healthy faction of fan favorites that Alkaline Trio can’t ignore, and the set was properly chock-full of them. Old standards like “Clavicle” and “Trucks and Trains” have never sounded better, and even lesser-known tracks like “Olde English 800” commanded enthusiastic sing-alongs. The performance was also fittingly heavy on songs from Good Mourning. If that was the record that summed up the sound early Alkaline Trio was honing, Shame provides a similar bookend to the direction their career has taken in the years since, and provides the blueprint for where it’s headed.

Alkaline Trio are important not only because they’re a shining example of how a punk band can have a sustainable career without making drastic commercial compromises, but also because they’re one of the few punk bands of the ’00s who’ve commanded critical attention in a broader musical context. A true testament to Alk3’s genuine substance, their crossover appeal steams from their honest, emotional, and raw approach to punk. When they’re at their best, they’re not just one of the strongest artistic forces in punk, but one of the strongest forces in music period. Though it came at the cost of struggle and turmoil, Alkaline Trio’s newfound clarity and second wind is a refreshing reminder of why we all loved this band so much from the start, and why there’s a lot of life (or, perhaps, darkness) left to share before they fade away.

She Lied to the FBI
Hell Yes!
Clavicle
If We Never Go Inside
Donner Party (All Night)
I’m Only Here to Disappoint
Olde English 800
San Francisco
I Wanna Be a Warhol
Sadie
Trucks and Trains
Blue Carolina
The Torture Doctor
Armegeddon
Dine, Dine My Darling
Crawl
This Could Be Love