It was another incredible season of East Nashville Underground, and we were there for as much of it as possible this weekend.  As always, the beer was flowing, the jams were happening, and good times were had.  If you still haven’t experienced ENU festival yet, you are missing out.  Click below to for some images (via Tim Duggan Photography for ENU) and recaps of the bands we were lucky enough to see, and go ahead and mark your calendar for the summer session happening on August 16th & 17th!  See you in all in a few months.

We missed ENU’s kickoff because we were across town catching Father John Misty. We’re big fans of Evan P. Donahue, The Future, and The Young International in these parts, however, and we heard they were all absolutely great! 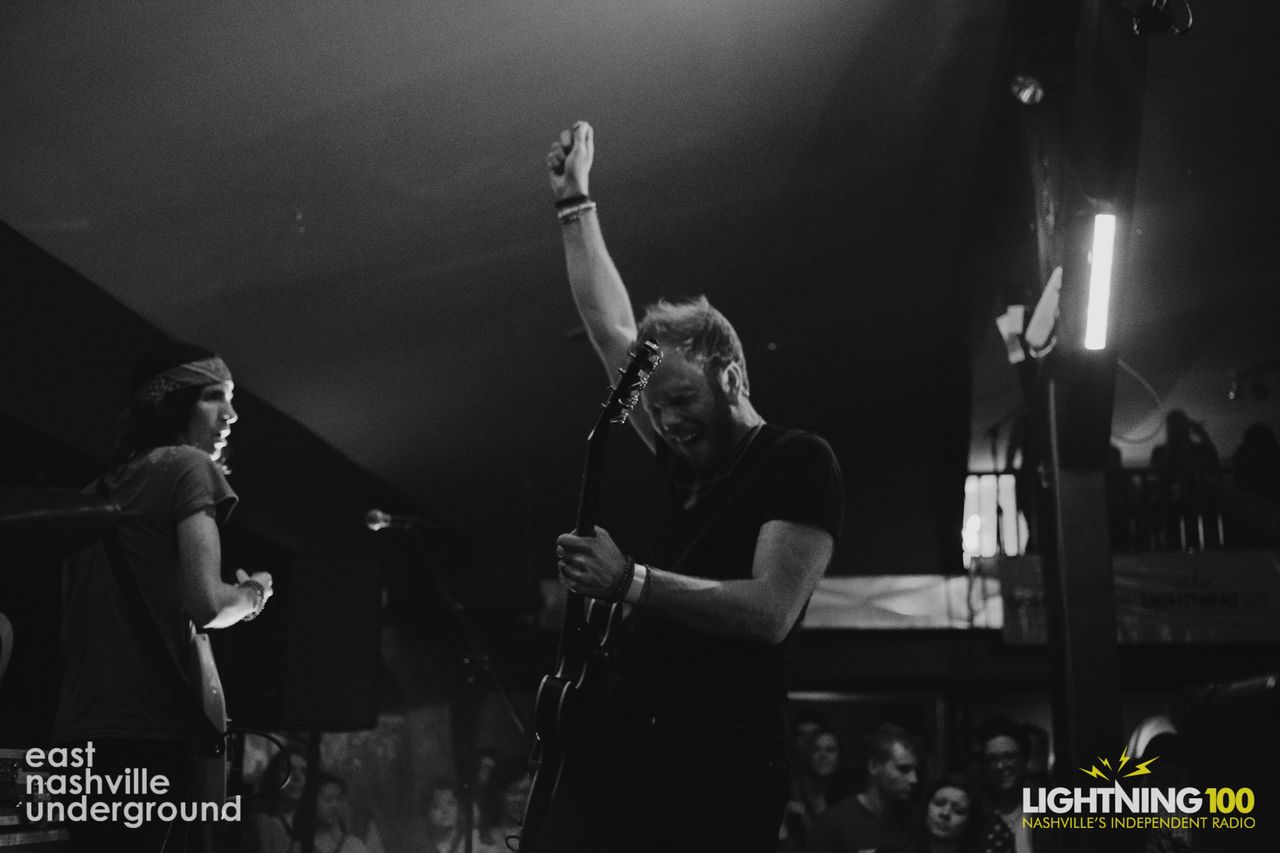 As soon as Father John let out, we rushed back to The East Room just in time to catch The Kicks. They’ve been on our radar for quite awhile now, but this was our first chance actually getting to see them perform. They certainly didn’t disappoint! The unpretentious rock quartet channels the spirit and sound the ’60s and ’70s, but adapts it into a decidedly modern, poppy rock and roll sound that is uniquely their own. The crowd loved them and so did we. 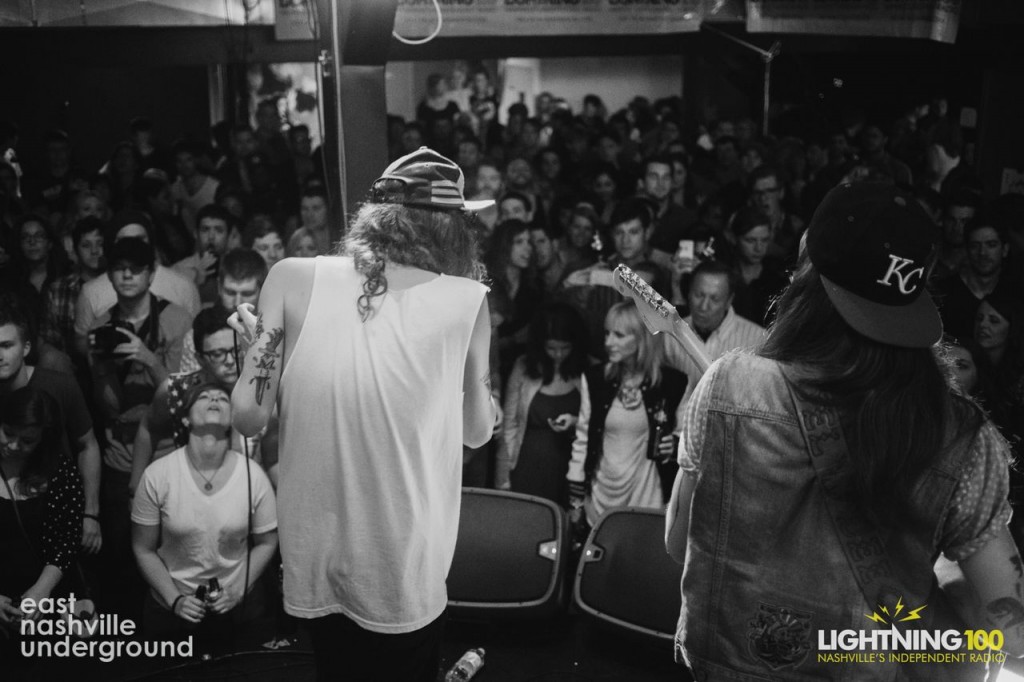 If you don’t know The Weeks by now, you’ve been snoozing.  The freakin’ Tennessean called them a “band to watch for 2013”, and lots of people will be watching them.  Touring in support of their recent release Dear Bo Jackson (on Serpents & Snakes), they’ll play a slot at Hangout Fest, before spending a few months opening for label-maestros Kings of Leon this summer.  The crowd was packed for the headliner, and the Grolsh was flowing while these fellas ripped through their set of high energy rock n’ roll. 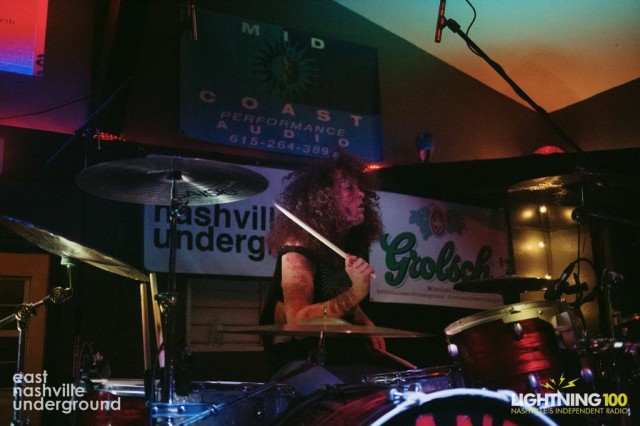 As Bang OK Bang took the stage, the capacity crowd had begun to thin, but that did not stop this duo from absolutely trying to blow the roof off the East Room.  In a sheer display of level 11 volume, those guitar riffs shredded the room.  They put a little bit of heavy into their rock, and a guarantee that I would leave with a smile on my face, and a solid ringing in my ears.

The family weekend, or was it the Friday night hangover, kept us out of the mix for Bears of Blue River (who we really wanted to check out) , Derek Hoke and Little Bandit (both of whom we are fans over here).  But, we did arrive in time to see … 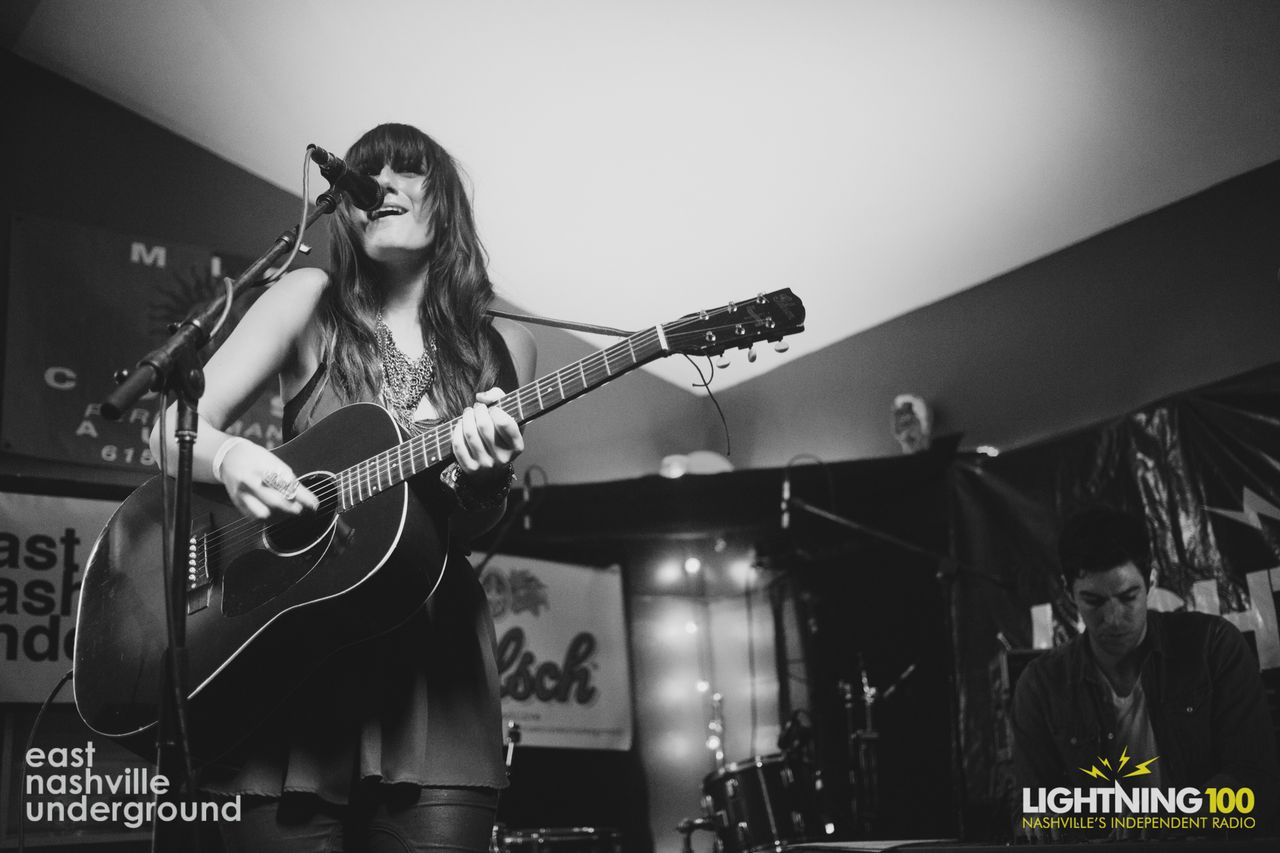 We admittedly weren’t very familiar with Alyssa Bonagura prior to our ENU preview feature. Or, at least, we thought we weren’t. It turns out we’ve heard her lovely tune “I Make My Own Sunshine” about a billion times on a Lowe’s commercial and still love hearing it every time. The laid back singer-songwriter was accompanied by only a keyboard player, and alternated between guitar and ukelele throughout her set. Her voice is as endearing as her personality, and, even to a tired midday crowd, she managed to fill the room with energy. 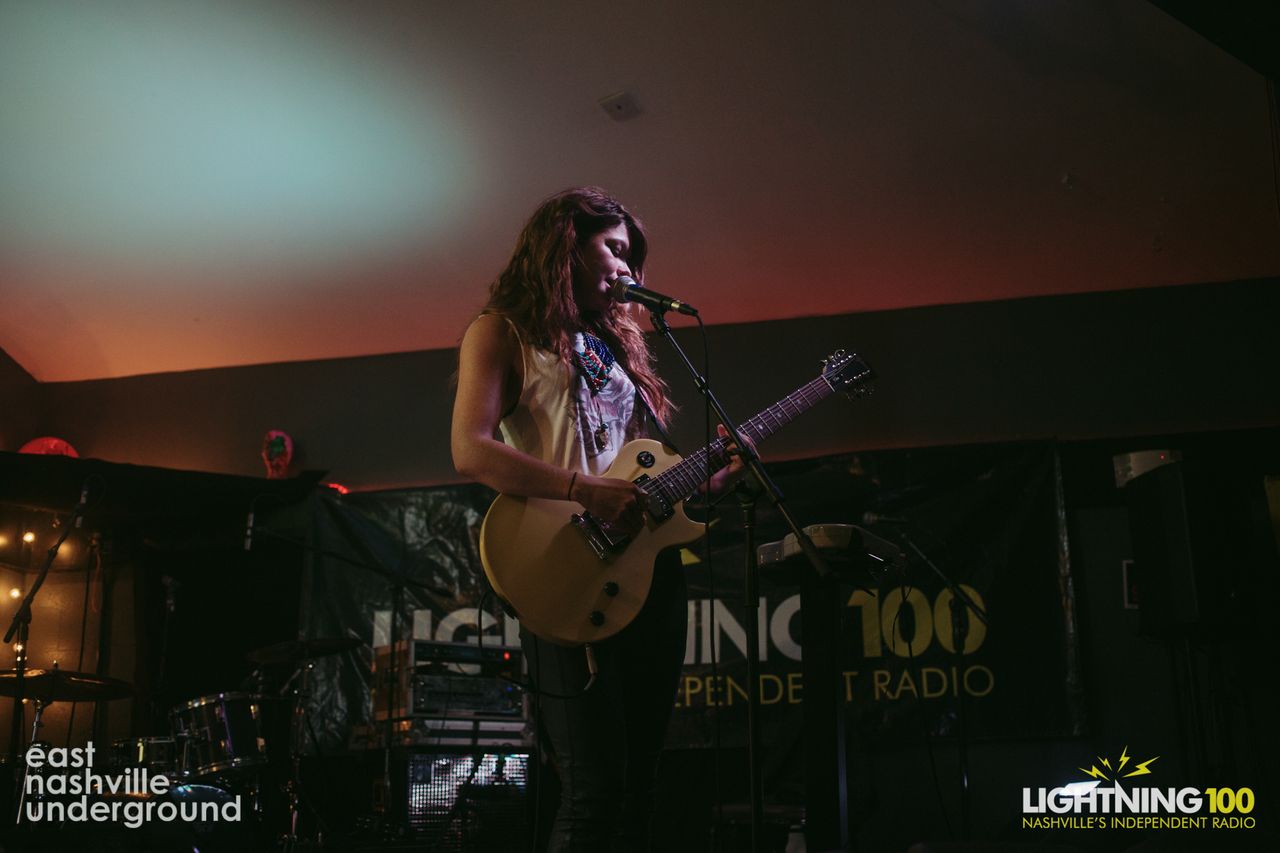 We’ve told you about Erin McCarley in the past, and we were really looking forward to catching her at ENU. Again, the mid-afternoon crowd is often a bit more sparse, and still nursing their hangovers from the night before, but McCarley commanded the room with her powerful stage presence and delivered her set with the energy and enthusiasm most artists reserve for a much larger stage. Her alt-rock singer songwriter style is really unique and fun, and her backing band helped bring the appropriate drive to her set. She’s a real gem in the Nashville scene, and one of the most seasoned live performers we’ve caught in awhile! 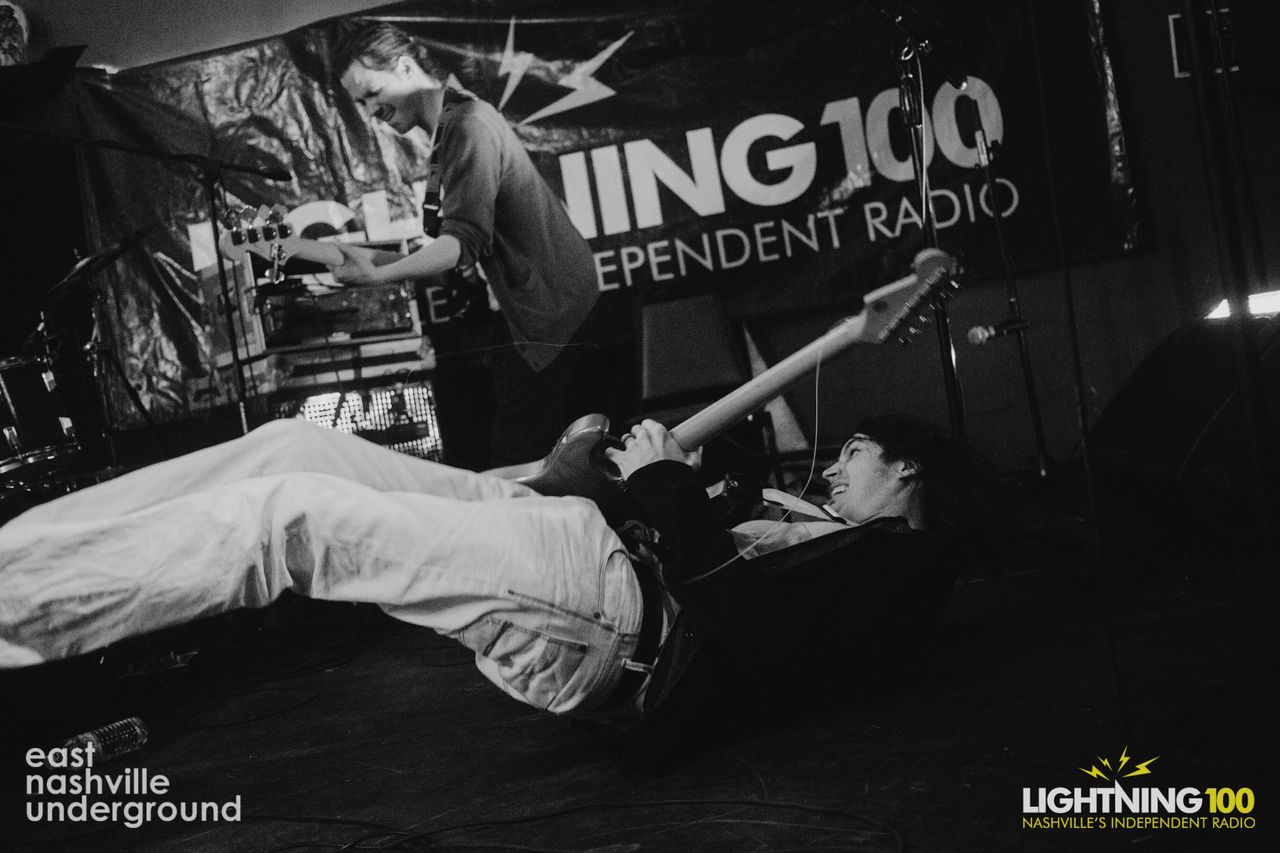 Here’s the thing about the Justin Kalk Orchestra: those dudes can plaaaaay. At one point, Kalk basically hog-tied himself with his own mic cable, stumbled around the stage, and broke a few strings and still managed to look like a badass. His ease of shredding and insane technical skill can’t be stressed enough- especially in a city full of gifted players. A great guitar player is only as good as his backing band, however, and the rest of the Orchestra brought the goods. Kalk’s rhythm section of Steo Britton and Jeremy Williams kept the blues-dripped rock and roll set thumping. The trio were clearly doing a good bit of improvising, and bounced off of each other flawlessly the whole time, never missing a beat. 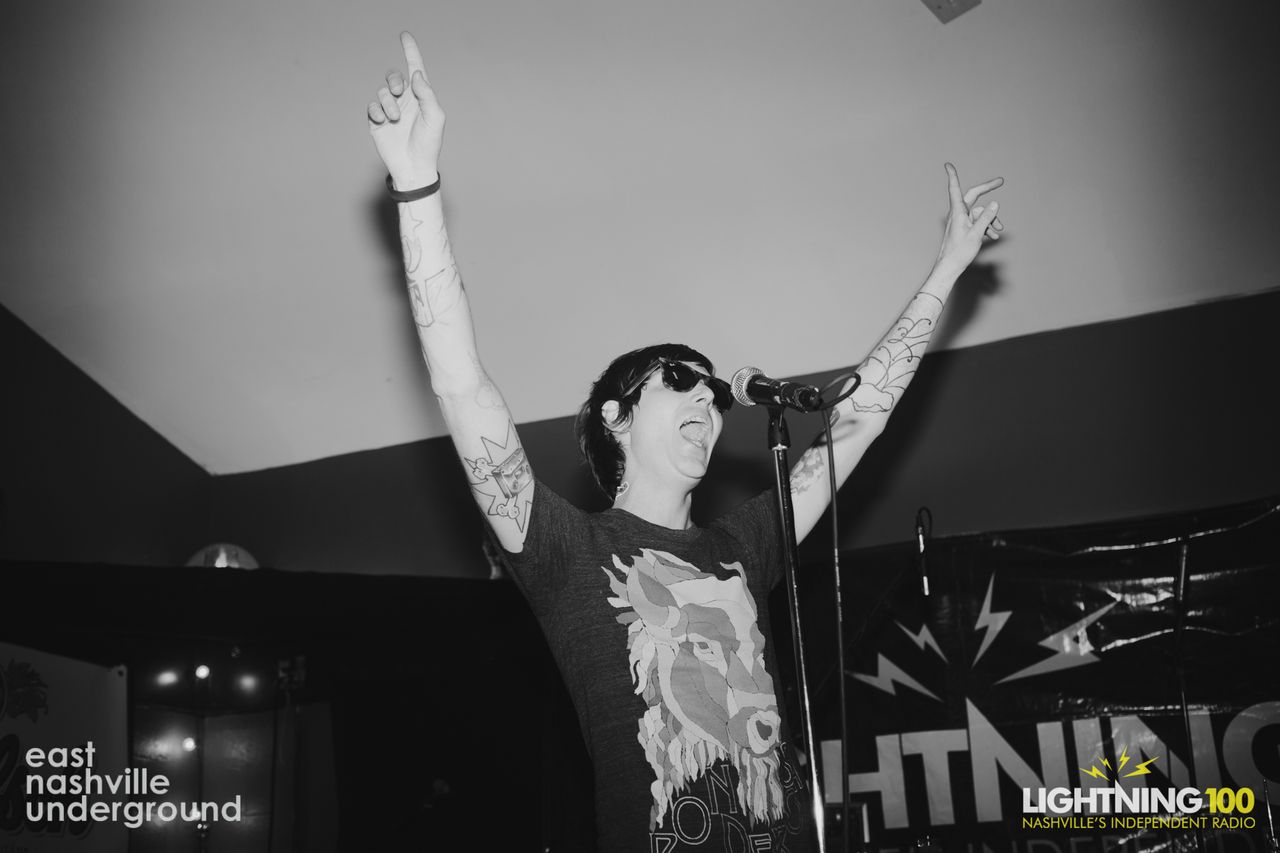 What was billed as Brandon Jazz & His Armed Forces turned out to be more like Brandon Jazz & His Armed Laptop. We’ve seen what Jazz can do with his full band, more elaborate staging, and bigger crowd to play off of, so it was interesting to catch him scaling to a more modest performance. Though he did play a few more sincere tracks, Jazz spent most of the set trolling the audience with Smash Mash karaoke and Third Eye Blind covers, and we loved every minute of it. Even when he’s messing around, Brandon’s energy and enthusiasm (plus his sincere talent) keeps him thoroughly entertaining to watch. 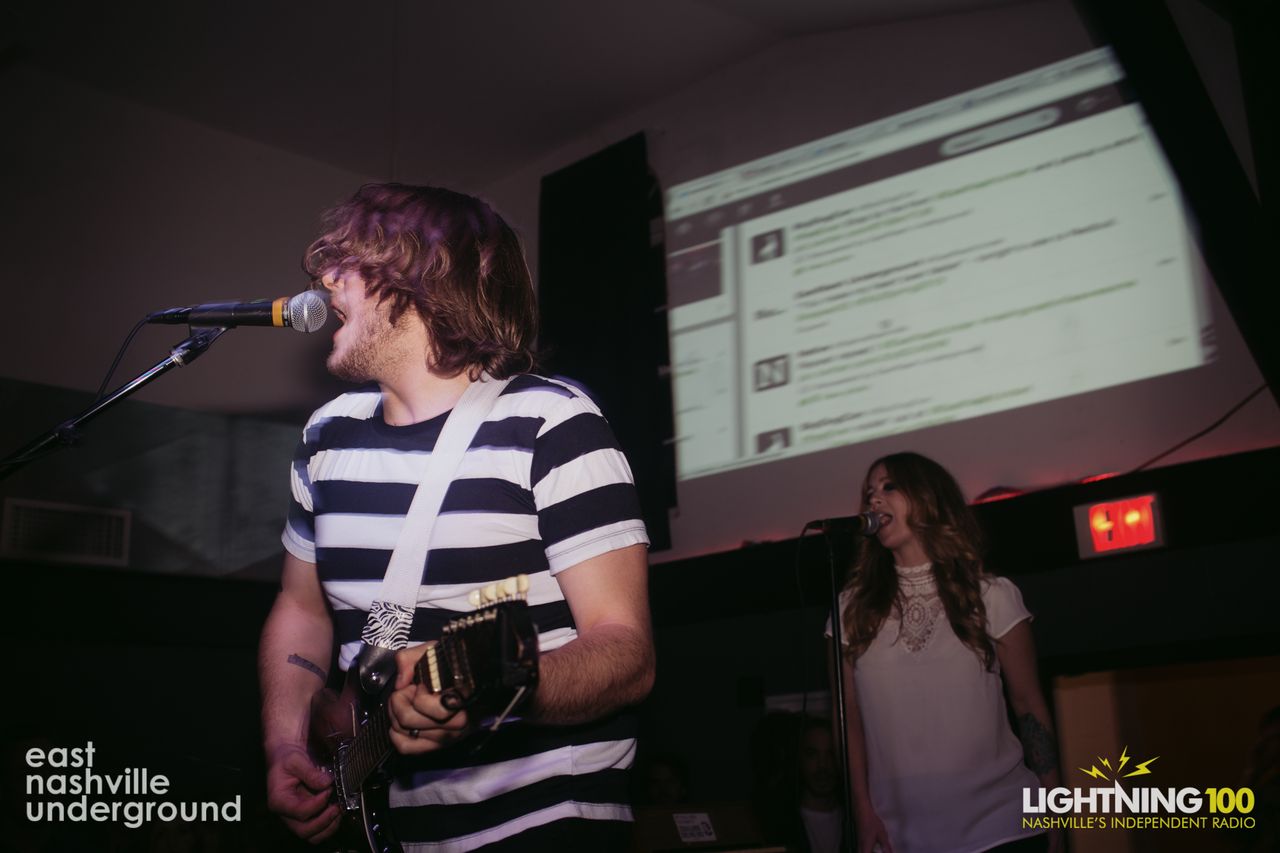 Our fearless festival founders, Jared and Kristyn Corder (along with drummer Andy Herrin), recently started a new surf rock project called *repeat repeat. The trio played their first ever show a few weeks ago, opening for the legendary Dick Dale (how cool is that?) so their ENU set marked only their second proper Nashville performance. If we didn’t already know that fact, we never would have guessed, because they totally tore the roof off. With surf and punk influences, an immense amount of raw energy, and a poised confidence, *repeat repeat brought fantastic harmonies, infectious riffs, and way more noise than just three people should be able to make. Keep an eye on this band! 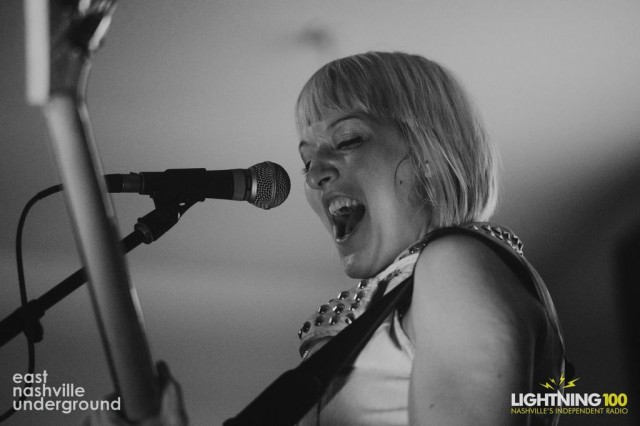 One of the writers of this here rag missed *repeat repeat for the second time, but Kink Ador was just the bit of encouragement needed to change a bummed attitude.  Front woman Sharon Koltick brings the heat in a post-pop explosion of danceable intensity.  We’ve had the opportunity to see Kink Ador in several settings over the past couple of years, but the band and crowd seemed to fuse their energy for the Saturday night set.  If you are looking for a good time, call Kink Ador. 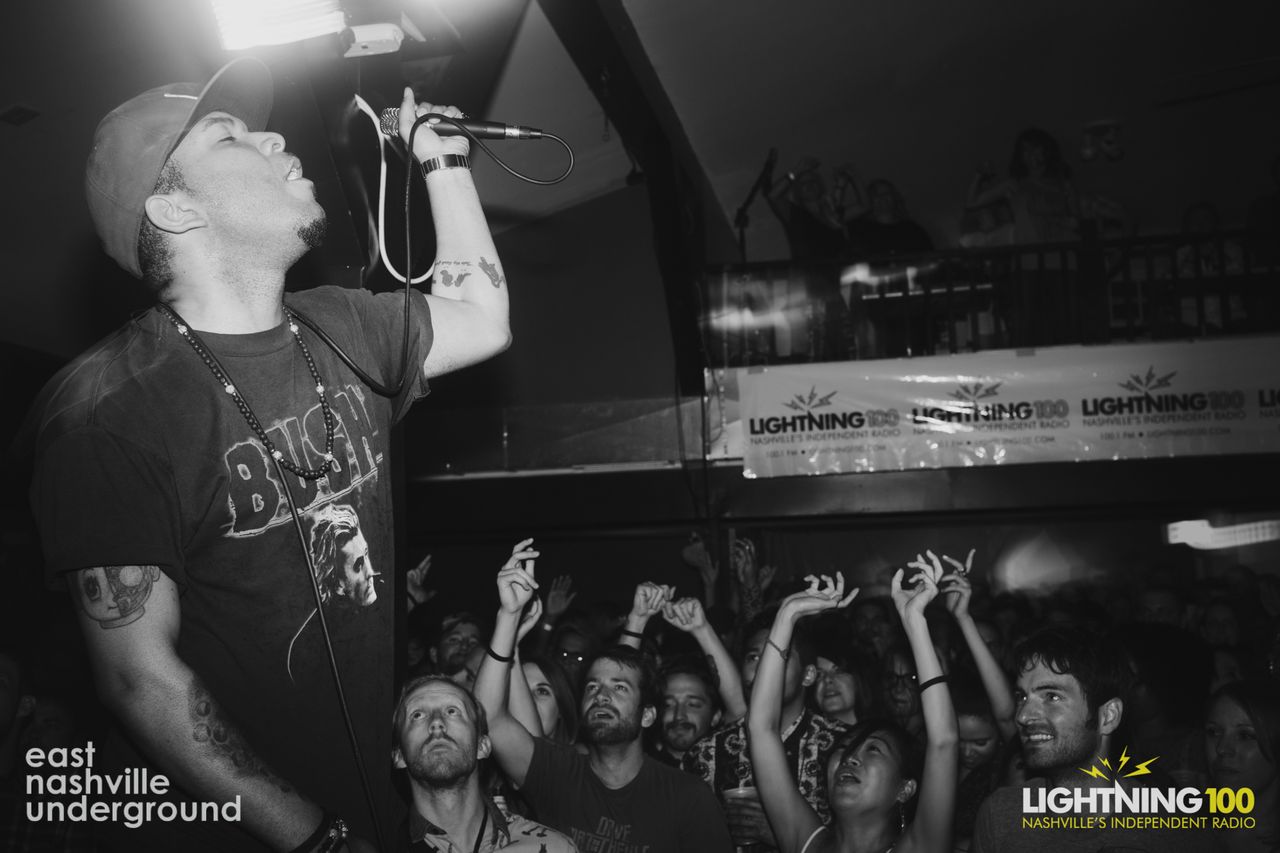 Chancellor Warhol was probably our most-anticipated performer at all of ENU, and man did he deliver. Warhol has been slowly blowing up over the past few years and releases, and 2013 is undoubtedly about to be his biggest year yet. The comparisons to Childish Gambino are inevitable: Chance channels the same indie rock tendencies and pop culture awareness but, on a technical level, he’s a superior rapper. Warhol’s flow is more akin to contemporaries like Kendrick Lamar or Lupe Fiasco, and his energy and ability to work the stage begs to see him in stadiums. Opting to perform with a live band really makes Chance’s show top-notch, and a surprise duet with Alanna from Alanna Royale was the icing on the cake. The crowd seemed to agree, because his set commanded the most packed and most attentive audience of the night. For me, Warhol took the ENU crown this season. 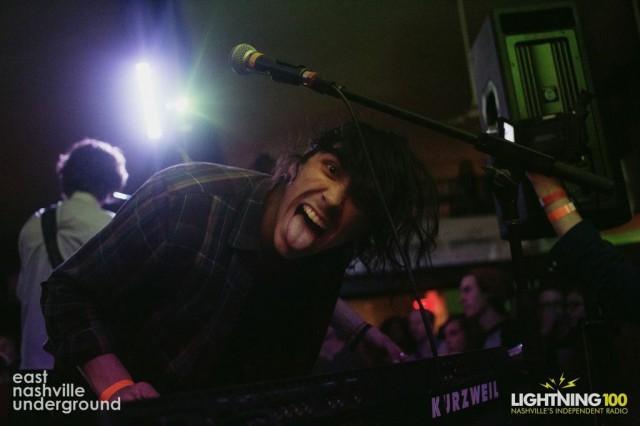 It’s hard to follow up a set like Warhol pulled off, but The Kingston Springs didn’t slink away scared.  It’s also no secret that we are pretty big fans.  They tore through a bunch of tracks off of their 2012 self-titled debut LP, and “Weight Of The World” was a gem of the night.  It also provided the knock out blow… ENU (really the Grolsch) finally caught up with us, after which it was babble and taxi cabs. 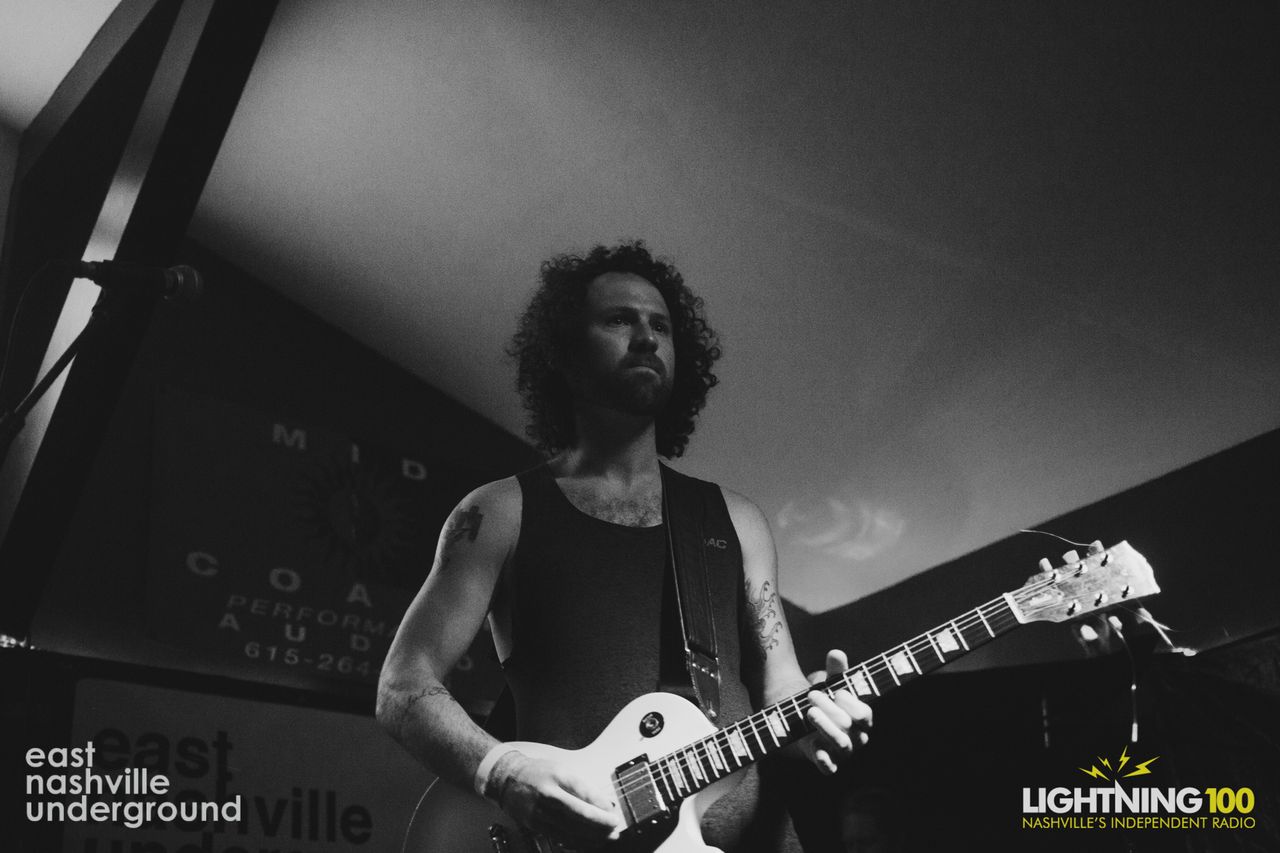 However, before the Grolsch could truly stifle our swagger, Hotel War managed to keep us vertical for a few minutes more to check out Hotel War.  We’ve heard quite a bit of Hotel War from press releases and the like, but it was our first time to see them live, and we were not disappointed… Granted, it is hard to be disappointed if you are feeling as good as we were, but the trio brought a solid unapologetic approach to traditional rock ‘n roll.  It couldn’t keep the largely dwindling crowd there all night, but it definitely slowed the exodus for a few songs.

Bravo East Nashville Underground, and we look forward to checking out your new space next season!