Get to Know: Erin McCarley

I’m not sure why it is so, but I tend to prefer male singer/songwriters over female ones. It sometimes comes down to originality…as in, a lot of female singers these days play into the same queue and with every new song, the same drone tone comes forth. Now, this is not to say that there aren’t any female artists that lack said originality. One female artist that breaks this mold and proves me ever so perfectly wrong is Erin McCarley. 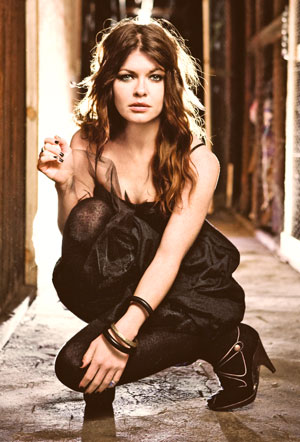 Her album “Love, Save the Empty” is one that stands alone in its button-poppin’, barrier-pushin’, feet-stompin’, heart-beatin’ way. One of the best songs ever written, in my book, (that’s unpublished and frankly not real) (that’s personal opinion only) (but in my dream-filled head is a NY Times Best-Seller) is “Pitter-Pat.” This diddy is has played over many a television show and my ipod. Its melancholic guitar strum, lyric deeply based in life, and led by a soft and warm vocal is what makes up any good song; a song with the ability to make you think it was written specifically for you. And only you.

I have been anxiously awaiting the arrival of her new album due out this summer. She released the first single, “Elevator” recently and I wanted to give it some lovin’ here. Sweet lovin’. The appropriate kind of lovin.’

There is no doubt that she will be around town to do what she does best once the album is released, so look here and really anywhere for her next live show. We will be excited for such an occasion. You should be as well.