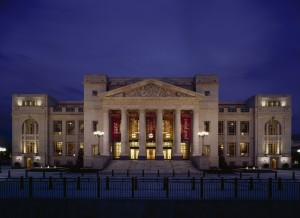 Guess what sports fans–Did you know that the Titans are playing this weekend?!

I bet you checked the schedule and are scratching your head about now. Come on—football season’s been over for months! Ha, Gotcha didn’t I?!

I’m talking about a special event taking place this weekend right here in the Athens of the South. Music will be performed by Olympians inside of another Greek-architecture inspired building–the Schermerhorn Symphony Center. The Classical Age of instruments such as strings, horns, and panpipes will assume the orchestral roles of violins, trumpets, and woodwinds. Instead of boxing or foot races, the Nashville Symphony will be carrying the torch for Gustav Mahler, violin virtuoso Joshua Bell, and Nashville-based composer and champion bassist, Edgar Meyer.

The Nashville Symphony is closing their 2012-2013 season tonight and Saturday with Gustav Mahler’s rarely performed work Blumine, and his First Symphony in D major appropriately nicknamed Titan. The concert will also feature the Nashville premiere of Edgar Meyer’s Double Concerto for Violin, Double Bass, and Orchestra. This is a gargantuan program. I can hear Apollo cheering with excitement from his post at the fountain facing Broadway.

The NSO invited me to join them for a Curb Open Dress Rehearsal Thursday morning. The CODR is one of the many education and community outreach opportunities they provide for students and under-served populations. Students in grades 3-12, homeschool families, and residents from assisted living homes were so pumped to be there! It’s a wonderful way to get exposure to classical music and to connect with the musicians and soloists. 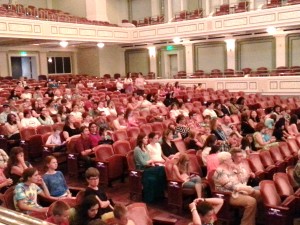 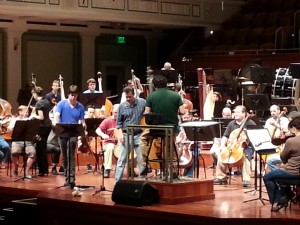 Maestro Giancarlo Guerrero kindly greeted the audience and promptly began with Blumine, a rarely heard work from Gustav Mahler. Originally it was a piece intended for a suite of incidental music to an epic poem, The Trumpeter of Sackingen by German writer Joseph Viktor von Scheffel. Mahler had decided to omit the work, but later chose to up-cycle it to the second movement in the original version of his First Symphony. Mahler is known for HUGE orchestrations–for example Symphony of a Thousand (YES that many instruments and voices); however this piece shows us his sweet, more intimate side.

Blumine has this amazing oboe solo that my friend and fellow East Nashvillian, James Button makes sound like a gorgeous satin ribbon. I think the trumpet solo in this piece helps to define the meaning of the title blumine, which is a variation of the German word for flower. I wonder if this is because Mahler knew that there is an entire species of trumpetflowers? Principal, Jeff Bailey gave the solo such warmth and color that I imagined instead of a horn, he was holding a very fragrant Allamanda cathartic or Golden Trumpet flower. The orchestra was a bed of roses. 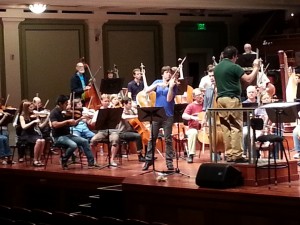 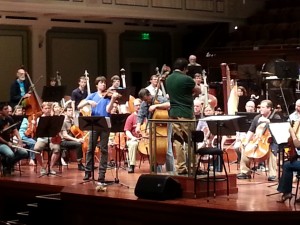 The highlight of this concert is that the two aforementioned Titans of the classical world are coming together for a DOUBLE concerto. You might have heard of Grammy Award-winning Joshua Bell, who performed the solo violin parts for the movie The Red Violin (which coincidentally is on Netflix right now) or from his Washington Post Experiment where he went incognito to a Metro subway in D.C. and made $32.17 from 27 passersbys in 45 minutes—only to have earned MUCH MORE the night before playing the same music in a concert hall. See video of that here.

Bassist Edgar Meyer lives here in Nashville. He is known for working alongside many popular artists like Bela Fleck, Sam Bush, Chris Thile, and Yo Yo Ma. Did you know that he used to PLAY IN THE NASHVILLE SYMPHONY?! I heard this from a few of the musicians. Rumor has it he would get bored sitting in the back, so he’d read the cello parts for fun. Apparently his sister also played for many years, too. 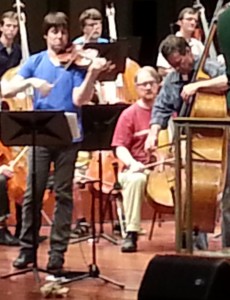 A concerto usually features one soloist and the orchestra, but in this piece the two extreme opposites will attract. The double bass is at the lowest end of the string family and the violin is at the highest. If you are familiar with Edgar Meyer’s diverse expertise, this is of no surprise—since he often likes to defy instrument stereotypes. His friend, Joshua Bell is THE JAM to his peanut butter. The violin and the double bass both play principal roles in the piece which is very RARE in classical repertoire. Mr. and Mrs. Bass Players usually stand in the back and saw long pitches of foundation. I love that Meyer has each instrument take on independent personalities. The double bass isn’t the foot pattern on the dance floor, but rather a partner with the flexibility to lead or follow the violin. There will be no standing still for the solo bass line, except for a few pauses here and there as the fingers tango from the tippy top scroll of the instrument…down to the peg on the floor. Meyer was positioned so low (high pitch) that I had to check to make sure his bow didn’t get placed ABOVE the hand while zigzagging along.

The first movement demonstrates this wide spectrum concept beautifully. The duo cadenza section is unbelievable. The two melodies intertwine and intersect without any boundaries in regard to range. If you close your eyes, distinguishing whether you were hearing a viola, violin, cello, or bass pitch would be difficult. Rhythmic motives were traveling between the two soloists then manifesting in the wind sections. Totally fresh. The second movement contains a remarkable clarinet solo melody that also is shared by the double bass line. Again, Meyer does not want to take the responsibility of providing the accompaniment. All other instruments work in this function. It’s nice to hear the softer and lyrical qualities of this instrument for a change. 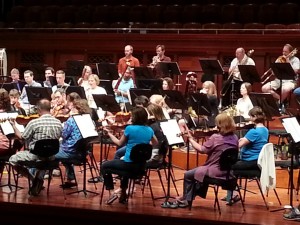 The third movement is probably the most versatile of all. Joshua Bell is gonna Get Fiddle up in yo face. Meyer on the other hand will be head down fingers jigging. I’m guessing since Edgar Meyer lived in Oak Ridge, TN for a time and having performed with a ton of Nashville artists—Bluegrass music had a big influence on this section. Being a classical musician, I was smiling at the fact that this piece started with a Copland-ish intro and then somehow morphed into the story of how Daphnis and Chloe went down to Georgia. The orchestra moved like a wagon wheel gleefully spinning down a smoky mountain. Bursts of improvisatory noodles and riffs surprise you the entire time. Which instrument will explode next? The audience LOVED it and you will too.

While the symphony resumed rehearsal on Mahler 1, I followed the large crowd to the Curb Education Room for a Q and A session. Here, the students get ask Meyer and Bell anything. I heard a mother say to her family, “Yes, that’s Joshua Bell. He’s the Michael Phelps of violin.”

There were many questions about their background, why they chose music professionally, and what they like about their instrument. The conversation was funny and enjoyable. We learned about Bell and Meyer’s background and how their friendship began at Indiana University years ago. They talked about the many projects they had worked on together and shared their classical training history. 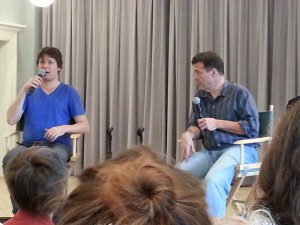 Here are a few questions from the session you might find interesting:

Question: Do you think that popular music today is lacking emotional or intellectual quality compared to the music of yesterday?

Bell: “I think that every generation considers past music better than modern music. The movie, Midnight in Paris is an example of this retro-appreciation. Classical is what I know—For example, I have a problem with modern classical music that sounds random and doesn’t have a logic to it. I like to have something to grab onto. Edgar Meyer’s piece has mathematic elements. It has symmetry. You know, He’s a math whiz. The fact that he incorporates his ability with numbers makes the work very appealing to me. There are many popular classical compositions that were not so popular when they were first performed publically. ”

Meyer: “It’s very hard to be precise about what has feeling and what doesn’t if the music affects one person in a positive way. The famous cellist (Pablo) Casals was seen as a cold, technical player in early reviews. He was all about performing with precision. As he got older, the critics said his playing was warm and emotional. I had a guy come up to me once and say that Bluegrass is so soulful and classical is so mathematical. ‘Soulful’is about what he understood and liked. Feelings about music vary from person to person.”

Question: Where do you find inspiration? How did Nashville influence your Double Concerto?

Meyer: “Love of music is central to my existence. My favorite composers are Bach, Beethoven, and Mozart. I find inspiration in musicians who are passionate about the music more than the instrument itself. The musicians I work with like Joshua Bell, Sam Bush, Mike Marshall, Bela Fleck, Roy ‘Futureman’ Wooten, and so many others.”

Your chance to experience this epic adventure will be tonight and Saturday.

Click here to find out more about tickets and pricing.

You can…ASK WHETHER OR NOT THEY HAVE SPECIALS AVAILABLE FOR THIS CONCERT. It never hurts to talk with the experts at the friendly Box Office at (615)687-6400.