The competition was fierce, and the joint was packed last night for the first edition of Road To Bonnaroo 2013.  The bands were bugging the crap out of fans all week with Facebook invites, and it showed when Mercy Lounge capped out around 10pm with a line stretching into the Cummins Station parking lot. 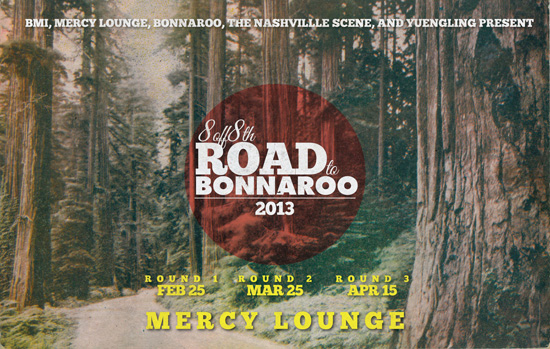 The Young International started things off, and front man Kaleb Jones was certainly feeling it with his Thom Yorke-ian moves.  Sol Cat busted a firm groove, and then busted their ass on stage at the end of their set.  Dylan McDonald and The Avians were a newbie to me, and I was pleasantly surprised.  Grass Root Kids probably had the most aggressive marketing of the event via Facebook, and it showed in the crowd packed with their fans.  Schools brought their usual style for a house was fairly lubricated and ready to party.  Alanna Royale fought through a cold, but left nothing behind for the grooving packed house.  It’s hard to follow a focused Alanna Royale show, but local alt-rockers Linear Downfall were up to the challenge.  The night ended with one of our local favorites Magnolia Sons, and the votes began to be tallied while “what the fuck is going on” band Lazer Snake took the stage.  While we slumbered (well, some of us), the Mercy Lounge staff tallied the fan and judge votes.

Add all that up, and the winner is Alanna Royale with a surely close second place finish by Sol Cat and Young International rounded out the top three.  Congrats to Alanna and her crew, it couldn’t happen to a nicer bunch, and a huge pat on the back to all 8 bands who put on a string of great performances last night!

Go ahead and mark your calendar for the next Road To Bonnaroo on March 25th.  Also, remember to check out Alanna Royale and Magnolia Sons this coming Saturday at The High Watt during our free SXSW Send Off Show.