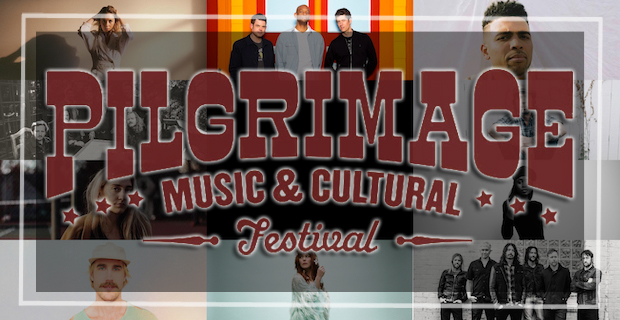 We’ve been buzzing about it for months, and the week has finally arrived, as we prepare to head to Franklin’s Park at Harlinsdale this weekend, Sept. 21 & 22 for the fifth annual Pilgrimage Music & Cultural Festival. We had a blast at years one, two, and three, and though year four was a bit of a speed bump with an unfortunate rain cancellation, it introduced an expanded lineup, new performance areas and amenities, and additional changes and improvements that have carried forth into 2019, this year’s installment promising to be the biggest yet. With around 70 acts, both local and national, slated to perform across half a dozen stages and performance areas over two days (not to mention a kids stage and new Mare Barn Theatre), plus local artisans and vendors, Pilgrimage is a community-rooted fest designed for music lovers of all ages and walks of life, and we feel incredibly happy to have such a great, growing event in our backyard. With a variety of ticket options still available here, it’s not too late to make it to this wonderful event, and as we do each year, we wanted to help those attending make the most of the weekend with our handy festival guide, highlighting our top 10 artist picks, from a variety of stages, broken down for each day of the fest. We already helped you get you ready to make the Pilgrimage with our Saturday guide. Rounding things out, check out our 10 most-anticipated Sunday performers below!

Raised on ’60s and ’70s blues and rock in Richmond, Virginia, Nashville newcomer Emma Hern is one of the handful of artists we caught last year before the rainout. With a powerful voice and a killer recent self-titled EP, Hern already seems like a musical powerhouse who’ll follow in the footsteps of local faves like Alanna Royale, primed to break out thanks to her soulful, retro, Americana meets glam pop sound.

It’s no secret that Better Than Ezra frontman Kevin Griffin, now a Franklin resident, is the co-founder and face of Pilgrimage Fest. Dependable and self-aware, Better Than Ezra have been active over 30 years, first breaking out in the ’90s with a string of hits and a widely accessible sound, and continue to churn out breezy, pop friendly alt rock. Always a festival highlight, it’s a blast to see Kevin slip into rockstar mode and get down at “work.”

We’ve been big fans of local soul and r&b singer and Philadelphia transplant Devon Gilfillian for years now. Raised on a steady diet of r&b, hip hop, rock, blues, and soul, Devon made a stellar debut with a self-titled EP in 2016, and has since inked a major label record deal, well-deserved buzz from esteemed national press outlets, major festival appearances, and a growing organic following. Expect his debut LP to arrive soon!

Though Denver singer-songwriter Nathaniel Rateliff has had a respectable career since the early ’00s, it wasn’t until the formation of his soulful, Americana and folk infused rock group Nathaniel Rateliff & The Night Sweats, that he broke out in a major way. Across two LPs, most recently last year’s Tearing at the Seams, and countless shows, the band have become a beloved outfit and festival fixture, renowned particularly for their electrifying live presence.

A native of Nashville and the son of acclaimed alt-country singer Steve Earle, Justin Townes Earle erupted onto the scene in the late ’00s. A gifted songwriter with the ability to straddle the line between Americana, folk, country, rockabilly, blues, and soul music, and a comfortable and honed performer, Justin has been churning out some great albums at a prolific clip in recent years, returning most recently with this year’s excellent The Saint of Lost Causes.

Another great up and coming pop gem on this year’s lineup who might be easy to overlook if you’re not studying the schedule, 21 year old Chloe Gendrow hails from Missoula, Montana, and made her introduction with 2017 LP Glow, returning this year with 22 Below. Boasting a lush, electro infused, contemporary pop sound, she’s the type of artist we simply can’t get enough of, and though her set is early, it’s worth it to discover a great new talent on the rise!

Raised in South Carolina but Nashville based since 2010, eclectic singer Adia Victoria has captivated us with her unique, poetic, southern gothic blues sound, laid out on her debut album, Beyond the Bloodhounds, in 2016, and perfected on this year’s Silences. Long an integral and beloved part of the local music scene, Victoria is no stranger to festival lineups, and thanks to her stunning, powerful live show, she’s perhaps the #1 reason to arrive early Sunday!

The ascent of local singer-songwriter Rayland Baxter has been an exciting one to watch, earning critical praise for his 2012 full-length debut, Feathers & Fishhooks, earning national buzz by 2015’s incredible Imaginary Man, and crafting his most expansive, honed, and genre-bending work yet in last year’s Wide Awake. Though rooted in alt country, that label hardly applies anymore, as Rayland flirts with rock, baroque pop, alternative and more, even recently releasing a Mac Miller tribute EP. One of Nashville’s most profound talents, Rayland’s always a must-see!

Though she first rose to fame with beloved indie rock group Rilo Kiley (and has since been a part of Jenny & Johnny and Nice As Fuck), sometimes-Nashvillian Jenny Lewis has forged an amazing solo career as well over more than a decade, first with Watson Twins teamup Rabbit Fur Coat and her beloved 2008 debut Acid Tongue, before 2014’s unbelievable The Voyager boosted her to new heights, and recent followup On the Line continued her earnest, breezy, poppy, and nostalgic indie rock ambitions. A true star of the modern era, Jenny is one of our absolute favorite artists to see in concert, and she’s become a regular festival performer for very good reason.

We don’t usually just jump straight to the headliners for headliner’s sake at the #1 spot, but with their caliber this year, there’s no one we’re more excited for than The Killers and then Foo Fighters. No strangers to Nashville, the long-running, Dave Grohl led alt rock icons feel like one of the last, true, relevant beacons of rock from the ’90s, still edgy and unwilling to fall into leaning on nostalgia, while keeping the rock spirit alive unadulterated and gimmick-free. Their show is always nonstop hits, lighthearted and compelling, and often full of surprises. Even new stuff, like 2017’s Concrete and Gold, has been solid and focused, and though their legacy and talent is immeasurable, the Foos always still maintain an appreciable, informal jam sesh vibe. If you were thinking of leaving early, don’t!

WATCH | “The Sky Is a Neighborhood” (Official Music Video)