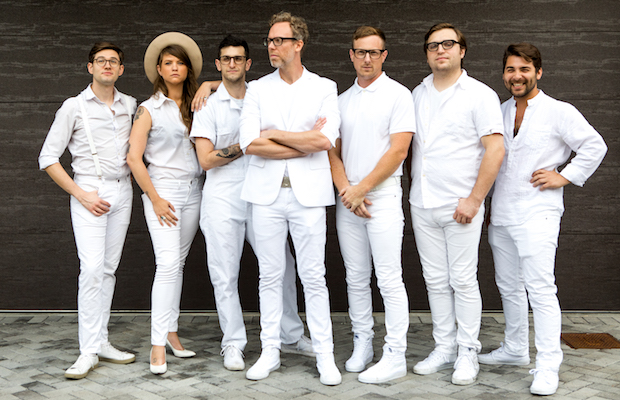 Last summer, we first introduced you to exciting new local project Smart Objects, when we premiered their debut single “The Autumn Man.” Since then, we’ve seen the band grow to become a regular live fixture in the local scene, amass lots of positive press, and further the buzz around their first single with a great video and, earlier this year, an impressive followup track, “Run Your Own Way.”

If it wasn’t abundantly clear from their prior releases, Smart Objects are one of the best and most interesting new bands in Nashville, and with each subsequent tune, manage to further cement their earnest, indie sound and impressive range. Today, we’re thrilled to once again bring you a premiere of Smart Objects’ latest single, “Devastator,” which you can stream right now below before it officially drops tomorrow!

Made up of members of local fixtures The Future, Gardening, Not Architecture, and Luthi, Smart Objects began as Ben’s backing band, but have since evolved into a full-fledged project, forging a sound that mixes retro rock grandiosity with a thoroughly modern, pop accessible, quirky, and smart indie rock sound. Name-checking influences from Bowie to Beck, we’d expect no less from a seasoned local fixture like Harper, and “Devastator” might be the best example yet of why you should be keeping a close eye on this band.

Harper tells us, “‘Devastator’ comes out of a short-lived dating experience that was shut down shortly after it started.  The reason that was given for cutting it off became the inspiration for a song about the divide that religion or faith can cause between two people who are otherwise connected or in the process of connecting. It’s about how someone seeking spiritual truth outside of the confines of organized religion is essentially after the same thing as a person seeking spiritual truth inside of those confines. It’s saying ‘Hey, I know that this perceived ‘divine divide’ seems like an enormous, unavoidable leviathan in the room, but I am here to connect with another human being and I am here without any pretense. ‘So where is our divine divide? Maybe there is no divine divide.’ Can I get an Amen?”

Produced by Harper, mixed by Handmade Productions, and mastered by John Baldwin, the new track is harmonically dense, and almost Spoon-esque in its driving, rich groove, fleshed out by electronic flourish and shimmering production. You can hear “Devastator” below, then celebrate its release this Saturday, Nov. 3 at The Basement, along with BRUNS (tickets here)! All of Smart Objects’ singles so far are set to appear on a debut full-length next year, so we’ll surely have plenty more updates before its release.