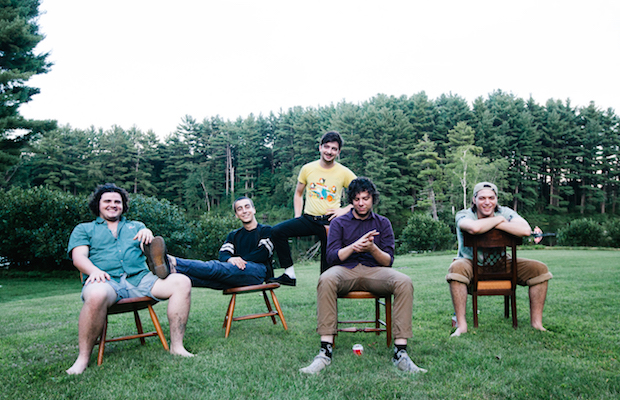 Fans of the blog and the Nashville music scene should be pretty familiar with Chicago garage rockers Twin Peaks.  They’ve made numerous stops here in support of bands like Eagulls, or as part of Freakin’ Weekend, or headlining their own shows at The Stone Fox and The High Watt.  Primary songwriter and frontman Cadien Lake James was searching for a new band in 2009, after dissolving his previous project, Teenage Dream, when his brother and other half of the duo was invited to join The Smith Westerns.  James found his answer in guitarist Clay Frankel, bassist Jack Dolan and drummer Connor Brodner, whose ties to one another stretch back to elementary school.  Of course, none of them were that far removed from elementary school in 2009, when they began playing shows in Chicago’s DIY underground scene.  They released their debut, Sunken, in 2013 via Autumn Tone Records, and, with the acclaim that followed, dropped out of college to embark on an endless tour and a followup record, Wild Onion, which dropped just a year later.

Now two years later and with hundreds of shows under their belt, including festival appearances at Pitchfork, Lollapalooza, Reading & Leeds, and Roskilde, Twin Peaks are gearing up to release their third full-length on May 13 titled Down In Heaven.  The new album was recorded in a cabin in Massachusetts, co-produced by the band and long time collaborator R. Andrew Humphrey, and mixed by John Agnello (Dinosaur Jr., Kurt Vile, Sonic Youth).  The result is a more polished take on the swinging garage rock sounds that seem to take only the good ingredients from certified masters like Ty Segall and Thee Oh Sees, and that is evident in the first single, “Walk To The One You Love,” which you can listen to below.  To see how far they have come, dig into a classic, “Stand In The Sand,” from Twin Peaks’ debut to see how the boys have grown in just a few short years.

LISTEN | “Walk to the One You Love”

WATCH | “Stand in the Sand”(Official Video)