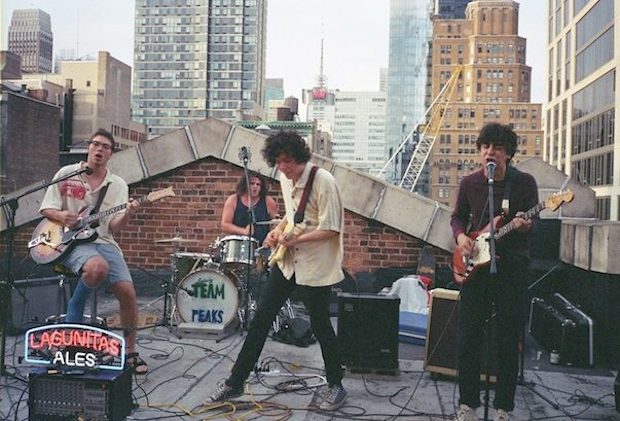 Not pleased with how your week has started out? Looking for some live tunes to shake the blues loose, and help you forget about your God-awful day job? Here at No Country, we have just the ticket to cure what ails you. Head on over to The Stone Fox around 9 p.m. for Windy City garage-pop rockers Twin Peaks. Throw in Cincinnati pop-punk trio Tweens, and local (via Oklahoma) space psych-rockers Penicillin Baby, all for just $10 at the door, and you’d be had pressed to rock harder on a Tuesday. Read on after the jump for more info on the bands and get your ass to The Fox for another weekday night of mayhem!

Listing their influences as everything from new wave garage guitar guru Ty Segall to ’90s grunge masters Pixies and even The Beatles, with a splash of everything in-between, Twin Peaks are a force to be reckoned with. Although they are too young to remember the short-lived David Lynch TV show of the same name, they are all heart with heavy lo-fi vibes and garage rock riffs. Touring in support of their second album, Wild Onion, they hope to take Nashville’s underground rock scene by storm, and leave us all with a wonderful indie-pop taste in our mouths. Have a sample below, and go see them live tonight.

We first saw the Ohio power punk-pop trio Tweens in the opening spot for The Black Lips about a year ago (see this post), and we are eager to see them play some new material from their debut self-titled LP. Look for the trash popsters to really get things cooking at one of the best venues for punk sounds in all of Music City.

Describing their sound as ‘space-trash’ on their FB page, Penicillin baby are a band in residence that we have been keeping our eye on. They killed it at a No Cell Phones Show we hyped towards the end of the summer, and have been paying their dues in warm-up spots for awhile now. Have a listen to their psych rock in outer space tunes below, and get on the band wagon now before they only play headlining gigs.