[REVIEW] The Black Lips w/ Tweens and JP5 at Exit/In 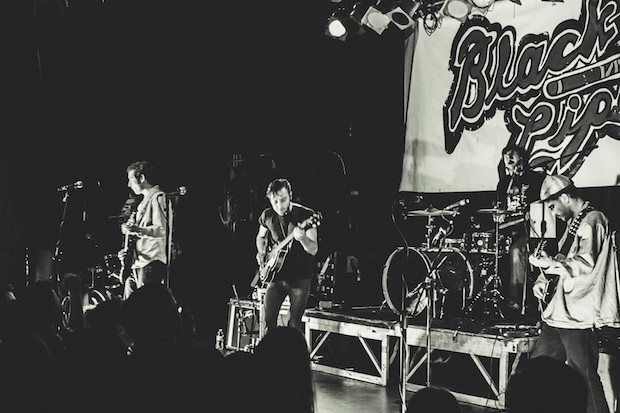 There’s no better way to polish of a booze fueled weekend romp than a punk rock Sunday. Of course, there should always be some form of pre-game before you really tie one on, so we hit The Stone Fox for drinks and a FREE showing of the Black Lips’ new Middle Eastern tour documentary, Kids Like You and Me, before heading to Exit/In for epic tunage. The continuous libations, Ohio natives  Tweens and local favorites JP5 helped fasten one hell of a bow on the weekend, but it wasn’t all peaches and cream. Read on to find out why and check out our exclusive photos at the bottom …

Nobody fucking dances in this town. There’s no doubt in my mind I’ve passed over some ragers by accident but almost ever show I’ve been to has been about as kicking as a nursing home sock-hop. Apparently it’s a prevalent epidemic and here at No Country we hope to stymie it before it’s too late. For being a music-centric town, sometimes we have a funny way of showing appreciation when good music is staring us right in the face. Not every person at the shows I’ve been too was a motionless, bored looking, apathetic zombie … but there were more than a few in attendance at the Black Lips.

Before the headliners took the stage, we were fortunate enough to catch Nash-Natives JP5. Joey Plunket (the JP of JP5) and his band of four local maestros was an interesting blend of Bruce Springsteen Americana and Justin Townes Earle ‘new’ country. I was informed by my editor beforehand that they all of them play in various other local bands too numerous to mention. With all of them, the talent level was top-notch, as was Joey’s marvelous and perfectly parted hair.

Next up was the fast, hard and fun power-trio Tweens. Lead singer/guitar Bridget Battle (or BB for short) was a more animated, female version of Joey Ramone all the way down to the baby-doll bangs. Her pure punk-pop vocal meshed perfectly with the super fast drumming and always on time bass. Their turbo paced set reminded me of everything I loved about 90s popular grunge with a new punk edge.

It was my first time seeing the Black Lips in person and I was busting at the seams with anticipation. The garage rock, skate punk legends would not disappoint, but the crowd would. I get it Nashville. In Music City everyone’s a musician, a critic and most are both. A full 70% of the crowd was detached, standing in place with arms folded the whole time. They were dissecting, examining the Lips, not even pretending to enjoy themselves. These ‘fans’ were too buys picking apart licks and breaking down effect pedal arrangements to appreciate anything the band had to give and they were giving it their brassiere collecting, loogie-spitting-catching-in-mouth, all.

Thank God for the other 30%. There were about 25 of us pushed all the way up to the front, creating a gap and making the statues even more noticeable from the stage. We were a motley crew, mostly 20 somethings and even a guy in his forties, Men’s Warehouse blazer and all. All of us were thrashing and mildly moshing from start to finish. They played the new record Arabia Mountain almost in its entirety ,and also debuted a couple new songs. They slowed it down a couple times with psychedelic lights and the fog machine, but, when they whistled their way into “Raw Meat,” everyone in the 30% lost their shit. The moshing picked up in intensity ten-fold and my photographer Jake Giles Netter took an elbow to the ribs before getting shoved hard into me. I launched him back into the fracas not realizing he’d taken a tough blow and watched him almost wipe out. Some skinny, pimple-faced punk hoisted himself up and was crowd surfing on the tiny little section of ragers. From our view it was bedlam, but we were surrounded by lames.

One such lame got bumped into during the hysteria, spilled his drink and commenced to picking fights. Real cool douchebag. If you don’t want to get bumped into, get away from the pit; however small it is. It was obvious the band was disappointed with him and the overall  lack of enthusiasm. They never stopped rocking it hard but at one point in between songs guitarist Ian Saint Pé made a gun-blowing-out-his-own-brains hand gesture as if to say this was so lame he’d rather off himself than go on. The band also didn’t play an encore, other than drummer Joe Bradley coming out to play one song solo on guitar. I could hardly blame them. Part of me wishes they had come back out just for the few of us who were loving it but I understand why they didn’t.

There’s nothing more disappointing than being told to “chill” by some dickhead at a show you’ve been looking forward to letting loose at for a long time. If you want to be lame, stay at home. Get your shit together Nashville! Mosh at punk shows, groove to some soul, get funky to jam-bands… but whatever you do dance!