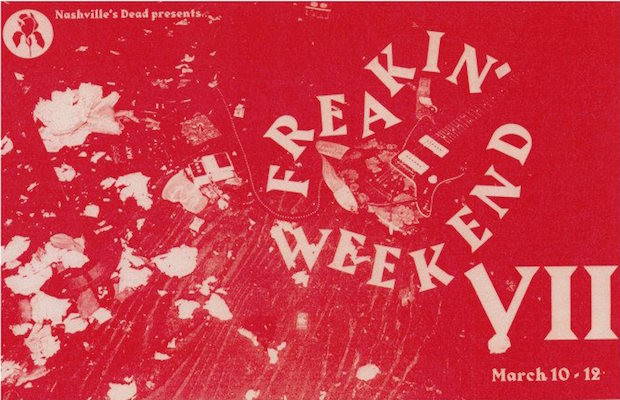 For seven years running, the fine folks at Nashville’s Dead have hosted a weekend-long celebration of the best local and national punk, indie, garage rock, and beyond. Dubbed Freakin’ Weekend, the stacked event, which has grown to feature pre-shows, after parties, day showcases, and more, is the local festival we most look forward to every spring. We had a feeling that Freakin’ Weekend VII might be the best one yet, after local heavyweights Diarrhea Planet, Bully, and Slammers were announced to headline, but the addition of inarguably the best day show lineups ever, the amazing undercard acts, and even an after party at Third Man, have sealed the deal. Below, we’ve put together a guide to this year’s event, which takes place March 8 at Queen Ave, and 10-12 at Exit/In, The End, Fort Houston, and Third Man Records, complete with song previews, ticket links (they’re individual; no weekend passes will be offered this time), age restrictions, and more. Given the caliber of the lineup, we’d recommend snagging tickets soon; they’re not going to last!

Before the full-on Freakin’ Weekend festivities kick off on Thursday, Queen Ave. is hosting a special all ages Tuesday night pre-party, featuring Philly punks Sheer Mag, self-described “bilingual political dance sax punk party” Downtown Boys from Providence, and Nashville’s own Brothers and Shadraq. At only $10, it’s light on the wallet, it’s the only all ages evening affair, and it’s sure to be a bit more low-key than the week’s later showcases.

The days shows have long been one of our favorite parts of Freakin’ Weekend, and they’re a fun way to really get the full experience if you can get up and get moving. This year, all three will take place at Fort Houston (500 Houston St.), and, per usual, are free and all ages. There will be records, tapes, zines, drinks, and snacks aplenty, and even special Freakin’ Weekend buttons, available for free in limited quantities. Nashville’s own Gnarwhal head up the first of three day shows, which are overflowing with even more of our favorite artists than ever before. Whether you’re ballin’ on a budget, underage, or you just want to take in as much music as possible this weekend, the day shows alone are stellar enough to deserve a close look.

Between breakout local grunge pop group Bully and Chicago garage rockers Twin Peaks, Thursday might be the most no-brainer night of the whole Freakin’ Weekend, especially with the a la carte ticketing setup. Locals Blank Range and Study Hall and Birmingham’s Lee Bains II & The Glory Fires round out an insanely stacked bill, and should all be familiar if you’re a regular reader of this site. Buck for buck, this might be the most buzzworthy showcase.

In earlier years, this lineup could easily have made up one of the night showcases, but a FREE, daytime party headed up by Music Band and Sun Seeker is just a testament to Freakin’ Weekend’s incredible growth over the last seven years. Same deal; show up early, get your day off to a good start, and don’t miss out on some quality tuneage.

Headed up by local hardcore group Slammers and Memphis punks Ex-Cult, Freakin’ Weekend’s second night moves to The End while Cee Lo Green borrows Exit/In for the night. Maybe the most conventionally heavy and weird of the three main night shows, Louisville garage punks and friends of the site White Reaper, New York eclectic punk act Guerrilla Toss, and Ty Segall cohort CFM round out the bill. The End is the perfect place for a packed out punk show, so while Friday night doesn’t have quite as much buzz, it could wind up being the most fun of all.

In years past, Pujol have rocked the main stage at Freakin’ Weekend, but this time around, you can catch them for FREE during the day! We can’t stress enough how killer the day shows are this year; wake up, pre-game, and soak up some music!

In the midst of a national tour and ahead of their highly-anticipated new album, local party rockers Diarrhea Planet return to Exit/In, where they’ve been the source of many of our favorite nights on Elliston. If you’ve seen their live show, then you know it’s insane, especially in small rooms, and if you haven’t, you’re missing out on one of the best rock and roll bands in the world right now, bar none. Nots, Big Ups, Growwing Pains, and Savoy Motel sweeten the deal, but DP more than make up for the cost of admission alone!

Featuring sets by Cy, Grey People, and Tan, premiere local indie dance party Portal is running the late night after-party at Third Man Records’ Blue Room to keep Freakin’ going extra long. Music starts at midnight and runs until around 4 a.m., so forget about being anything close to productive by the time Sunday rolls around.

Find out more about Freakin’ Weekend VII here and here.