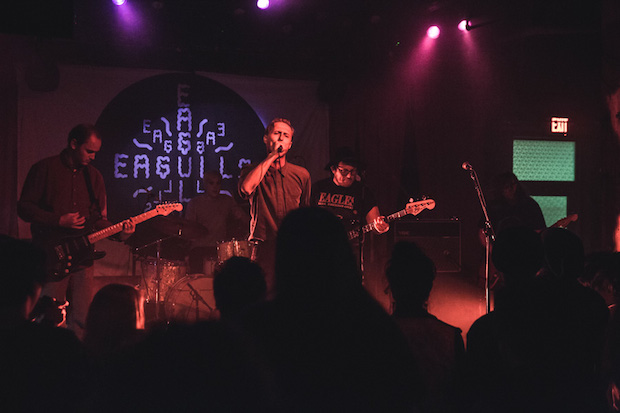 By every stretch of the imagination, this show should have been awful.  It was a Monday night, calling the crowd sparse would have been an exaggeration, and we were beat from yet another big weekend of shows.  Leave it to some loud, scuzzed up rock n’ roll from Eagulls and Twin Peaks to change our mind in a hurry, and keep us out way past our bedtime.

Skip on down below for a bit of a review and some photos from Shawn Jackson of  Sundel Perry.

High energy punk influenced garage rock energized the anemic crowd. A steady tempo increase brought a full on mosh pit out in a few of the bigger fans, but the lack of screaming fans didn’t deter Twin Peaks from performing like they were playing in front of a sold out Bridgestone Arena. Busting out singles from their upcoming new record that show the growth of a band that has matured not only their sound but their ability, we look forward to the new release ‘Wild Onion’ in August, and hope it will bring them back through to a bigger crowd later this year.

During the set change, Eagulls made it clear that they were going to be pummeling ear drums with effect laden noise rock. Bassist Tom Kelly, appropriately wearing an “Eagles” t-shirt, was creating a literal siren of feedback with his instrument. The piercing sound not only ran us out of the room, but reminded us that ear plugs are a must when seeing Eagulls. Channeling fuzzy garage rock with a definite British Invasion aura, they are a playful romp of effect laden riffs with lead singer, George Mitchell’s, powerful Brit punk vocals. Powering through tracks from their 2014 self titled full length debut, a small yet raucous crowd thrashed through the set with the vigor of a growing fan base of the loud and proud.  This was our second time seeing both bands, and each was equally memorable on yet another Monday night that was worthy of a tired Tuesday.

Check below for some pics (despite the incredibly low light) from Shawn Jackson of Sundel Perry.