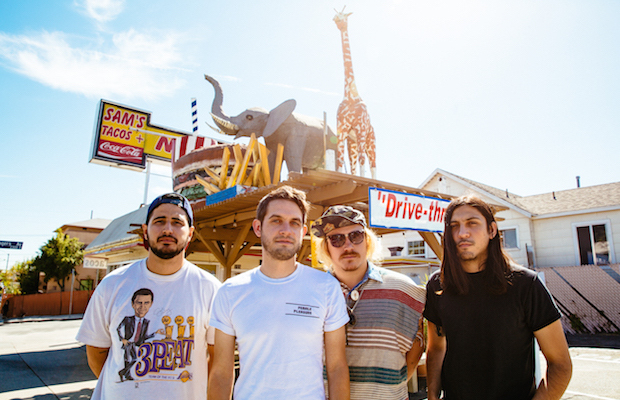 If you’re trying to get your garage punk on, The Stone Fox is the place for you tonight. Music City is eager to welcome Burger Records artists together PANGEA, topping off a quality bill, which also features 2/3 of our Infinity Cat curated No Country Presents bill at Acme Feed & Seed this summer, namely White Reaper and Jawws. Best part? You don’t have to spend an arm-and-a-leg to rock out … tickets are only $10. Read on for more information on the bands, and for a taste of the tunes. We hope to see you there!

Known for their fast, loose and unpredictable style, together PANGEA are roster members of LA based Burger Records, who we first saw live during Burgerama a few years ago. Currently touring in support of their latest shreddy EP, The Phage, the three piece are part of the ever growing coastal California garage/punk/psychedelic scene that seems to be spreading all over the country. Growing up in the ‘90s, bands like Nirvana, Smashing Pumpkins, and Weezer have influenced TP to wonderous effect, so sample them below, and be sure to check them out in the flesh tonight.

Though we’ve been hearing a ton about White Reaper over the past year, we finally had a chance to see them in their hometown of Louisville at this year’s Forecastle Festival.  Let’s just say, when we locked them in the following month as part of the Infinity Cat curated showcase we did on the roof at Acme Feed & Seed this summer, all expectations of awesome were blown away.  White Reaper are currently touring in support of their killer debut full length, White Reaper Does It Again, which dropped earlier this year on Polyvinyl, and just this week they released a video for “Make Me Wanna Die,” which you can check out below.

Infinity Cat darlings that we love to rock out to, Jawws have been building a steady following all around town the old fashion way; one kick ass show at a time, and, of course, some well deserved recognition in the press. Their initial offerings, including this tasty 7“, entered our heavy rotation last December, and has stayed there ever since. Get to The Fox on time and catch one of Nashville’s best young up-and-coming punk bands.

together PANGEA, White Reaper, and Jawws will perform tonight at The Stone Fox. The show is 18+, begins at 9pm, and tickets are available for $10.