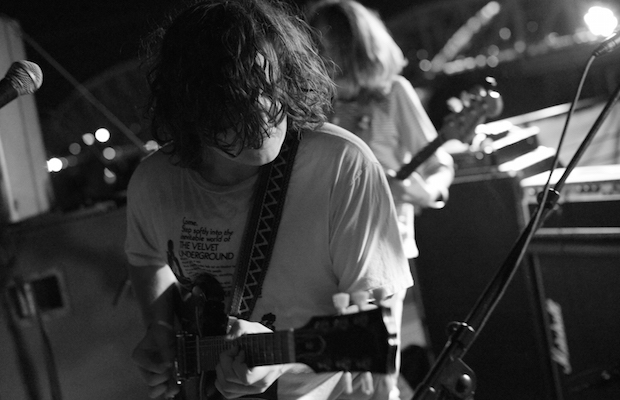 Every single Tuesday for more than a year, we’ve been teaming up with hip downtown restaurant and performance space Acme Feed & Seed to host a free showcase of some of our favorite emerging local and national talent. For our latest installment, and for only the second time ever, we moved the party from the usual spot of the first floor up to Acme’s rooftop bar, and teamed up with local taste-making label Infinity Cat to bring you a show with some extra rock and punk bite, boasting Nashville grunge pop trio Daddy Issues,  Louisville rising rockers White Reaper, and hometown hardcore punks Jawws. Read on for more about it! 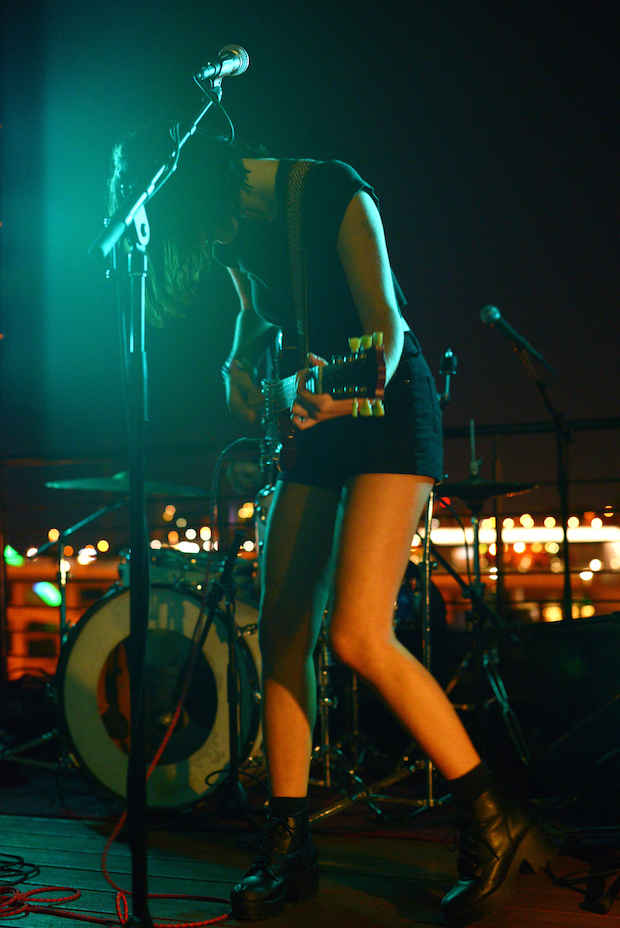 Kicking things a little later than usual, Daddy Issues went on shortly after the sun had set, stepping onto our makeshift “stage,” a roped off corner at the edge of Acme’s rooftop deck, silhouettes in the bright, backing light (note to self: get more stage lights if we do another one of these). While we’ve certainly written about them numerous times, and many of our contributors have seen them play, this marked my first Daddy Issues show, and, after rocking their debut album, Can We Still Hang, all summer, I couldn’t have been more excited. Living up to their grungy, rough sound and earnest and sometimes sarcastic persona, the trio’s unpolished charm and delightful attitude were compelling. Though the crowd was packed in, I was expecting a full house (as it turns out, it was an especially busy Tuesday), but the friends and fans in attendance were there to watch, a break from the more touristy mix of dinner guests we sometimes see on the first floor. Blasting through a short and sweet set of faves like “Creepy Girl,” “Veronica,” and “Ugly When I Cry,” Daddy Issues definitely lived up to the hype, and I can’t wait to see where their career takes them in the coming years; if you don’t know this band yet, correct that immediately. 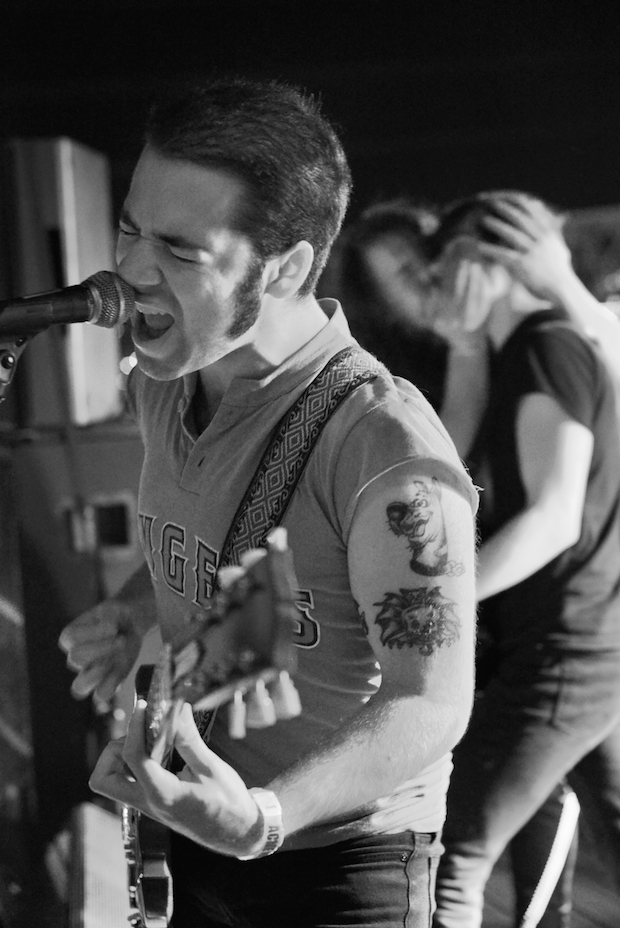 If you’ve been to any of our Acme showcases in the past, you likely know that, barring some special occasions like The Lees of Memory’s first show and our one other rooftop outing, a pre-Bonnaroo showcase featuring the year’s Road to Bonnaroo winners, we have to consider the dinner environment, and, while we often slip in some of our favorite local rock acts, we simply can’t get too loud, heavy, or punk on a typical Tuesday. Delighted to be working with Infinity Cat and wanting to utilize the more conventional show freedom of the fourth floor, White Reaper were our top pick for a touring act we’ve just been dying to bring to Nashville, and we couldn’t have been more appreciative that they agreed to play.

Hailing from Louisville, these guys absolutely ripped at Forecastle Festival last month, and their Acme performance, the band’s first proper Nashville show since rising to broader recognition, recaptured much of that energy. Hard to classify, the group channel elements of old punk, indie, and garage rock, all with fuzzy, synth-laden tendencies and a nearly uncontainable live presence. Their debut full-length, White Reaper Does It Again, is one of the year’s best under the radar releases, and hearing those songs come to life live, with even more bite and momentum, was incredible. Doing their best to bring the antics of their live show to the confined space, the guys ran around their corner, fell into the crowd, flung guitars, and managed to sound at once raw and unpredictable while maintaining the seasoned polish that is quickly helping propel them to indie rock’s next buzz band. We pride ourselves on being curators, and White Reaper are a prime example of the kind of band we’d love to bring you each and every week; versatile, eclectic, and simply just damn good, this young band are well on the way to becoming a big deal, and we’re humbled to have witnessed them at this stage of their ascent. 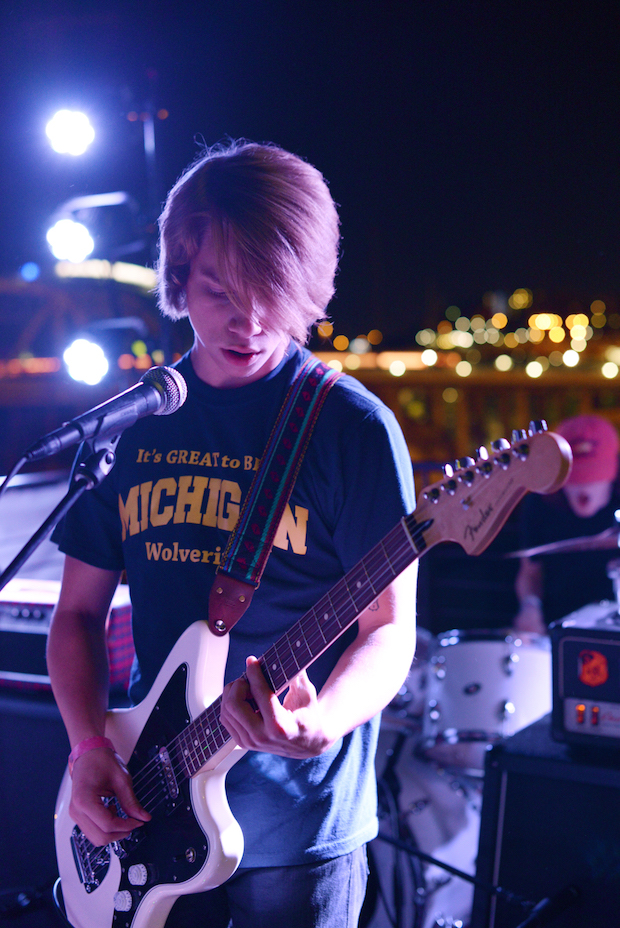 In a night scheduled with increasing heaviness, young, mostly (all?) teenage punks Jawws were tasked with closing out the show. A relatively new act and with only a handful of tracks to their name, Jawws have already become one of the torchbearers for Nashville’s thriving punk scene, and all of that attention is beyond well-deserved. Whoever or however got these dudes into so much of the classic hardcore that has clearly has shaped their sound, I’m just happy that their authenticity is fused with modern punk sensibilities and their attitude and intensity is real, not some sort of contrived nostalgia or attempt to co-opt such an important scene. If you told me that they were some golden era Dischord band that somehow slipped by, you might have me fooled for a bit. Running through basically every song they’ve released to the public and a few I wasn’t familiar with, the guys sounded heavier and more ferocious than I’ve ever seen them. Admittedly, Acme was a tough environment to book a band who thrive in living rooms and dingy clubs, and, surely, the 21+ restriction is not ideal for a group whose fans and friends are largely underage, but Jawws brought every ounce of spirit and unhinged punk attitude to their set, and ruled the night with easily the heaviest, rowdiest Acme show I’ve ever seen.

A note regarding security: I neglected to make this a focal point of my review, since, as a part of No Country, I try to be as objective with these Acme recaps as possible, as we’re a partner in curating the event each week. However, those of you in attendance and, certainly, the performers likely witnessed an overreaction on security’s part to moshing and crowd participation. While the logistics of hiring, training, and scheduling security is something that does not fall on our shoulders, we certainly want to see audiences at any show, and especially a show with our name on it, treated with respect, and allowed a safe environment in which to enjoy music however they choose. Needless to say, punk shows are a rarity on Broadway, and, in all likelihood, this is the first time Acme’s security team has had to deal with this type of crowd. While the safety of the audience, especially when standing on the edge of a building, is important, it could have been handled in a much more calm and respectful manner, and we assure you that if and when we book another show like this downtown, we will be sure to better work with Acme to communicate this well in advance (also, know that the powers that be at Acme did their best to address this on site). And to the artists, we understand that the situation was frustrating, we thank you for addressing it, and appreciate you for remaining as professional as possible; downtown Nashville can’t change over night, but we’re happy to be a part of facilitating something we feel represents the best of the real Nashville of today.

Our free, weekly Acme showcase continues this Tuesday, Sept. 1 with All Deeds Done, Justin Forrest, and The Way Down Wanderers. We hope to see you there!

Better Off Debut Another Single, "This Day Will Never End," Ahead of New LP