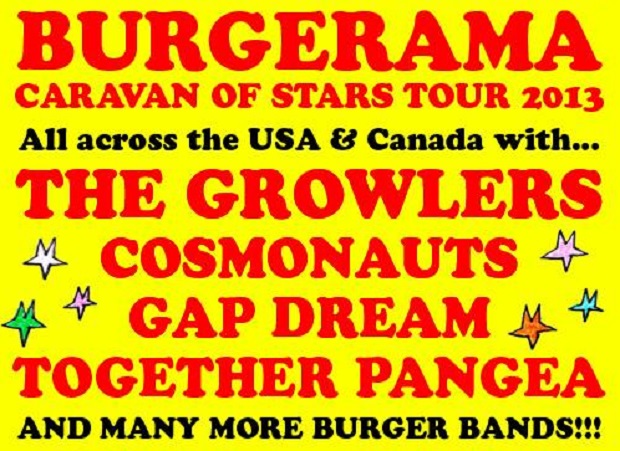 We’ve been waiting for this show for months now. As you may imagine we get an abysmal number of emails from publicists, bands, labels, etc with submissions of all types. We try to at least give every submission a little bit of our attention, but, when Burger Records sends us a new band, we stop and listen (usually more than once). So, when the Fullerton, California based label decided to send a bunch of their acts on the road, we were stoked to see a Nashville date with the bands The Growlers, Cosmonauts, Gap Dream, together Pangea & Curtis Harding.

All of this excitement is happening tonight (10/9) at Mercy Lounge, and things get started around 9pm. We’ve got some previews to get you in the mood below, but go ahead and grab your tickets for this not-to-miss-show right here.

The Growlers bring some lo-fi rock n’ roll that taps into a little bit of everything that is great about Burger Records. We were big fans of their 2010 release Hot Tropics, and have been giving equal turntable time to their 2013 release Hung At Heart. You can check out the video for “One Million Lovers” from Hung At Heart below to see how it uniquely straddles the line between The Walkmen and Deer Tick.

Cosmonauts bring a fuzzy psychedelic garage rock sound that should feel like a warm blanket to those of us that are fans of the similar sounds coming out of a lot of Nashville garages. Have a listen to “Shaker” from their August 2013 release, Persona Non Grata, below to see what we are talking about.

Gap Dream popped in the national conscious with the release of their self-titled debut in early 2012. Since then, the Gabe Fulvimar, has relocated from Cleveland to Fullerton to sign with Burger Records, and that is probably a good thing for the fuzzed out dreamscapes that are evident in our first listen to the upcoming November follow up Shine Your Light. You can check out a video for “Chill Spot” from that upcoming release below.

together Pangea (formerly Pangea) have been a bit out of the spotlight since their 2011 release “Living Dummy”. Though they did spend time aptly filling tour bills with the likes of Wavves, The Black Lips, FIDLAR, Ty Segall, Mikal Cronin, King Kahn and the Shrines, and many more. You can check out the 7-inch release for “Snakedog” below which is preceding another upcoming full length release.

Curtis Harding is best known for his work with Cee Lo Green, and most recently has teamed up with members of Night Beats and The Black Lips in a band called Night Sun. We have no idea what to expect as this thing gets started, but we’re pretty sure it’s what we will be talking about in the morning. Take a look at some live Night Sun footage below to take a guess at what you can expect.

Burgerama 2013 featuring The Growlers, Cosmonauts, Gap Dream, together Pangea, and Curtis Harding will perform tonight (10/9) at Mercy Lounge. The show is 18+, begins at 9pm (doors at 8pm), and tickets are available for [$15].

2013 Best Of Nashville Winners Announced & A Huge Thank You!