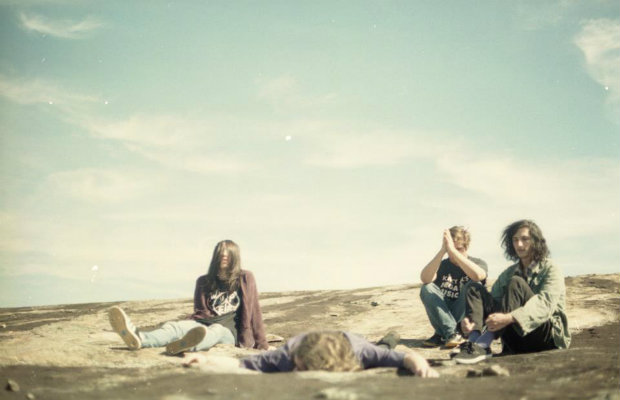 The Mumzees’ sound is something you can get lost in. Soaked in reverb, the distorted guitars are as fuzzy as they possibly could be; the lyrics are often unintelligible but somehow manage to still be catchy. Their music can be droning at times, but in the best way possible. And while the debut album they released earlier this year, Heavy Desert, is an absolute ear worm we can’t stop listening to, the best way to experience the band is live. Lucky for us, they’ll be playing Betty’s tonight, Nov. 3, along with Big Surr, Triathalon, and White Walls. The show starts at 9 p.m. and will cost $5 at the door.

The Mumzees create music that’s soaked in reverb. Their sound is so fuzzy that the muffled quality of the music could almost be described as an additional instrument, used to obscure certain parts of songs more so than others. There’s a hazy, mysterious quality to their music, like you might be hearing the best song you’ve ever heard on the radio, but the station isn’t coming through clearly and there’s static and crackling keeping you from hearing the whole song. But, you still know that what you’re hearing is extraordinary, and it actually might be that very fuzziness that keeps you wanting to hear more. Live, that layered sound is even more intense, creating a fog of sound that’s entrancing and inescapable.

Local band Big Surr play dreamy, beach rock. Their swirling guitars will send you right back to those hot summer days we’re all missing so much right about now. The band has been around for a few years and have a few releases under their belts but they’re now playing with a new lineup.

Last year Georgia based band Triathalon put out a fuzzy debut album called Lo-Tide, an appropriate title for a lo-fi, upbeat, collection of songs that like the other bands on tonight’s bill at Betty’s, had some pretty beachy vibes. They’re releasing a new album, Nothing Bothers Me, in just over a week.

The White Walls have been playing together and writing songs for several years now but just released their first album, Green, Green Eyes, last year. This local indie band has a great new single, “I’ve Been Thinking” out now, ahead of a new album.

The Mumzees, Big Surr, Triathalon, and The White Walls will perform tonight, Nov. 3 at Betty’s. The show is 21+, begins at 9 p.m., and tickets are available for $5 at the door.