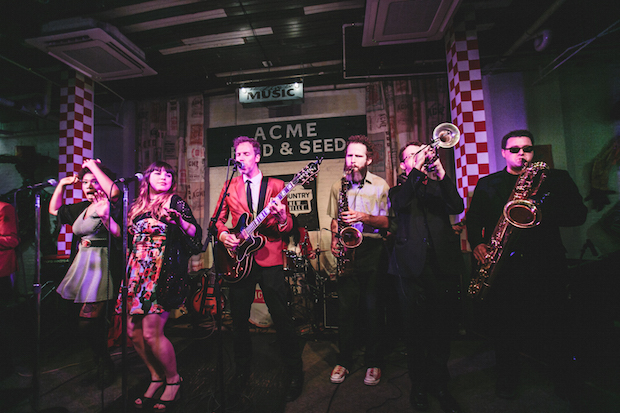 Magnolia Sons with Major and the Monbacks
Acme Feed & Seed, Nashville, TN
May 5, 2015

We would like to continue to welcome all of you reading this out there in Music City and beyond to Acme Feed & Seed every Tuesday night, for the weekly showcase from our live events wing, No Country Presents! HOWEVER, and this is important, next Tuesday, May 12th, we are taking a week off, while Acme hosts a private event. This past Tuesday’s bill featured beach-bum-big-band Major and the Monbacks, and neo-soul, funk rhythm and blues mega-band Magnolia Sons. Read on for a recap, and for some great shots from photographer Jake Giles Netter.

So, when it comes to drinking “holidays,” Tuesday’s seem to be in fashion this year. Although our Fat Tuesday party was canceled because of the Snowpocalypse, in 2015 we’ve already had an epic St. Patricks Day throw down with Alanna Royale, and talent-wise, it Cinco de Mayo was stacked up to be just as awesome. When I arrived at Acme, I was little surprised that it wasn’t more crowded. No doubt most people opted for a more Mexican themed backdrop, but $3 Coronas, $4 Tequila shots, and $5 margs is a fucking great deal wherever you are. Throw in free music, and I’d be sold whether I was covering the beat for No Country or not. 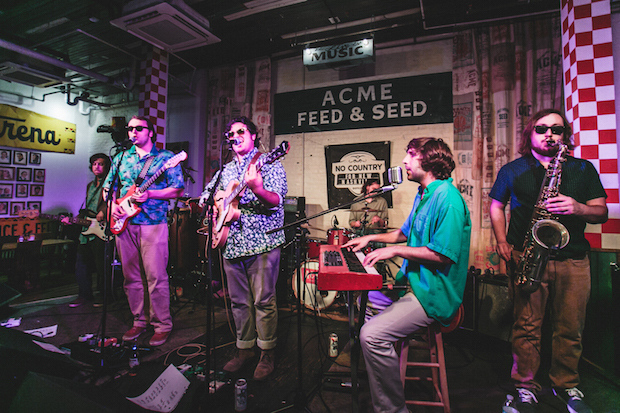 Major and the Monbacks. Photo by Jake Giles Netter.

First up was Norfolk, VA, eight man band, Major and the Monbacks. They’ve played for us once before at Acme, so we already knew we were in for a great performance. Since that showcase, they’ve beefed up their sound a little by adding a trumpet player, but their chill, coastal inspired sound remains well intact. The floral Cinco de Mayo inspired shirts and Vampire Weekend shaggy hair only reinforced the vibe that emanates from their music. They played a plethora of originals that had everyone tapping their toes, and swaying along to the beat. They dropped a great cover of the The Band’s rendition of the Marvin Gaye classic “Don’t Do It,” and I was struck by how well they pulled it off … not that there was any doubt. It is Broadway, so covers are always accepted, if not expected, after all. After the show, I rapped with one of the guys about life and the biz, and got an advance copy of their new self-titled LP (drops next Tuesday), and I assure you it’s worthy of many listens.  Want to see them yourself? Don’t worry, these guys blow through town fairly often, so we’ll let you know when you can catch them again in Music City. 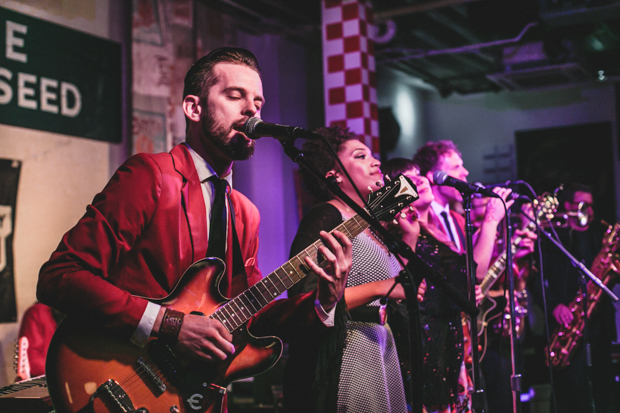 No strangers to Nashville stages, Magnolia Sons were in the house to turn the tequila fueled party out. More people had started to file into Acme by then, and most (us included) were at least half-way to drunk. Helmed by the songwriting team of Austin Aguirre, Benjamin A. Harper, and also featuring No Country Presents alumnus Dustin Sellers (pictured above), plus seven other stand out musicians, the Sons are neo-rock ’n’ soul big band at it’s best. Lead vocal duties are shared amongst the superbly talented collective, and different songs highlight the various talents of each. The breadth of their sound is astonishing, and they always put on a great, high energy show. They are no rookies, they’ve been putting it down in Nashville for over seven years.

They blasted through their powerful set, some wearing their now signature, ultra slick, matching coats. The highlight for us was their stand out, hit single “ Baby That’s You,” which always seems to be a crowd favorite. As their set was winding down, it was obvious that we were well past buzzed, and were now wandering into “wasted” territory.  So, before things got ugly, we closed our tabs, and Ubered back across the river away from further Broadway shenanigans.

Enjoy the sick photo spread from photographer Jake Giles Netter below, and DON’T FORGET we are taking one week off (May 12th), but we will back at Acme, hosting our showcase the following Tuesday, May 19th.  See you then!