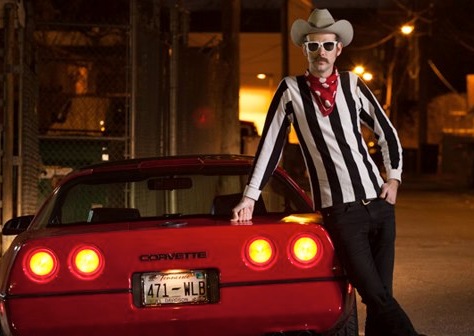 So long Road to Bonnaroo, it’s been another fun year! In the third and final installment of the competition, where local talent is selected to perform at the esteemed summer festival, it was decided that party rocker Ri¢hie would be joining previous round winners Alanna Royale and Ranch Ghost this summer at ‘Roo.

Below, we’ve got a quick recap of the night, along with short clips of each band from our Vine account (they’re muted by default, scroll over to un-mute). If you’re on Vine as well, search for “No Country For New Nashville” to follow us!

Playing first is always tough, but hard hitting rockers The Wans really owned that opening spot, and kicked off the night with a ton of energy and enthusiasm. In a night full of flashier bands with gimmicks and flair, The Wans let their music speak for itself. Unfortunately, last night night’s turnout didn’t seem as packed as the past two, so the crowd energy wasn’t as high due to sheer lack of bodies.

It was easy to spot the Billy Swayze fans; half of them were wearing t-shirts with his name on the front. The soulful, eclectic singer-songwriter and his band rocked through three fantastic tunes, well-selected to showcase their diverse range and influences. It’s no surprise that Billy took home the top spot for fan votes. His energy is infectious, he really knows how to work the crowd, and his performance style is seasoned and endlessly entertaining.

Last night was my first time seeing Ponychase (something I’ve been looking forward to, since, as you know, many of our other contributors have been raving about them) and I can confidently say I was not disappointed. Their retro nostalgic new wave sound, coupled with a solid performance style, modern aesthetic, and simply fantastic songwriting made them one of my personal favorites of the night. They were the only band aside from Ri¢hie to pop up in both the fans and judges top 4, and for good reason!

I’ve seen Ri¢hie a couple of times now and there’s one thing I can say for sure: he/they never fail to entertain. Led by Richie Kirkpatrick, the group is a total tongue-in-cheek, pseudo-satirical take on rock and roll decadence. Their embellished style, over-the-top themes, hyper confidence, and general ability to get the party started is what makes them not only one of the most fun bands around, but also a confidently solid project, joke-rooted premise aside. Ri¢hie’s not trying to be the best; just the most fun. And, at that, they succeeded. I personally think that they’re as good a Bonnaroo ambassador for Nashville as any!

Meth Dad is the one band on the bill I went in knowing basically nothing about, and I was pleasantly surprised. They gave, perhaps, the single most entertaining performance of the entire night. With a stage full of Hawaiian-shirt clad backup singers, confetti everywhere, a Christmas-light covered human chain, and more crowd engagement than any of the other performers, they easily took the cake in flair and showmanship. Not to mention, their infectious, dance-driven, singalong style is a ton of fun.

Dressed as doctors and nurses, the infectiously fun and upbeat Tipper Whore delivered a dancey, lively performance. They really have a knack for filling the room with energy, and really earned a great response and enthusiasm from the crowd. Performing right after Meth Dad, who have a similar stage presence and attitude, might have been to their disadvantage, but, nonetheless, I really dug their set.

The last time I saw Cy Barkley & The Way Outsiders, they performed as a 3-piece. Adding another guitarist to the mix really beefed up their already-fantastic punk rock sound, and allowed for a bit more energy and weight in their delivery. As a huge punk fan, I honestly can’t say enough great things about this group. The attitude, the execution, and the songs themselves are all top-notch, and they’re one of the most entertaining live bands around.

Closing out the night, which is just as tough as kicking it off, bluesy rocker Jacob Jones had to unfortunately play to the thinnest crowd of the evening. That didn’t seem to phase his delivery, however, as Jones and his always-incredible backing band brought all of the energy, enthusiasm, and fun that we’ve come to expect from his performances. I can’t help but wonder if the outcome would have been different with a larger crowed, but, regardless, it’s always a good night when I get to watch Jacob perform.

That’s it folks, we’ll be back with Road to Bonnaroo coverage when it kicks off again next spring. Until then, we’re counting down the days until the festival!