The Postal Service Reunion CONFIRMED; No Longer Limited to Coachella!

A couple of weeks ago we brought you news that The Postal Service would allegedly be reuniting this year for Coachella. At the time, the sole source of information (or lack of information) was indie blog Brooklyn Vegan. Since the site has a solid track record, I assumed it to be accurate, but remained cautiously optimistic while waiting for the proper announcement. Well, it seems that The Postal Service just couldn’t wait for Coachella to spill the beans, and this morning threw a promising new website up. Yep, folks, this is really happening! 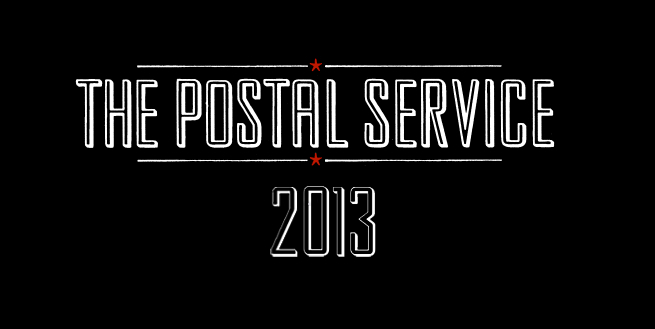 The site provides no information, aside from the teaser image above. We’re still waiting on the real Coachella announcement, but at this point I’d pretty much assume an appearance at the festival is in the bag.  Billboard has uncovered further details: Sub Pop is prepping a deluxe edition of the band’s sole album Give Up for its 10 year anniversary next month. Additionally, the band’s status has been switched to “active” on their booking agency’s website, and reputable sources have apparently confirmed more shows and festival appearances to be in the works. No album plans have been announced, or even speculated on, at this point. The band have been pretty vocal about having no intention to record another album, when asked in recent years. However, this entire reunion seems fairly spur of the moment, so plans could certainly change.

Since more festival appearances have all but been confirmed, Bonnaroo suddenly seems a lot more possible. What do you guys think? Would you like to see the electro-pop duo on the farm this summer? As always, keep up with all of the latest Bonnaroo info in our 2013 Lineup Rumors post!