As reported by SPIN, Billboard, and our friends over at the Nashville Scene, The Black Keys, who we like to claim as a hometown band, have just announced a show at Bridgestone Arena on Friday, May 3. The show is part of a special string of dates with psych-rockers The Flaming Lips (a pairing I’m pretty floored about!). And it’s never too early to start thinking about those “Best of 2013” lists, because the Keys also announced that they will be heading into the studio next week to write and record a new album with a tentative spring release in mind. Here’s the brief show announcement from the band via Twitter:

As I’m sure you’re all well-aware, The Black Keys’ 2011 release El Camino further jettisoned the group on the critical and commercial trajectory they’ve been riding since the previous year’s Brothers. El Camino and breakout single “Lonely Boy” were both recently nominated for a handful of Grammy Awards. It’s nice to see that the band’s mainstream success has seemingly left their process unaffected- the recording announcement indicated a pretty low-key plan and environment for working on their forthcoming release.

The Black Keys and The Flaming Lips will perform at Bridgestone Arena on Friday, May 3. After fees, the tickets will range in price from $47.75-$61.99. The presale begins this Thursday, January 10, at 10AM (and I’d imagine they’re going to go pretty fast!). General onsale begins the following day. Bridgestone’s calendar has not yet been updated, but you can find the ticket link here.

UPDATE: We’ve got the scoop on the presale. Starting Thursday morning at 10AM you can use the password “CAMINO” to score tickets a day early! Here’s the flyer: 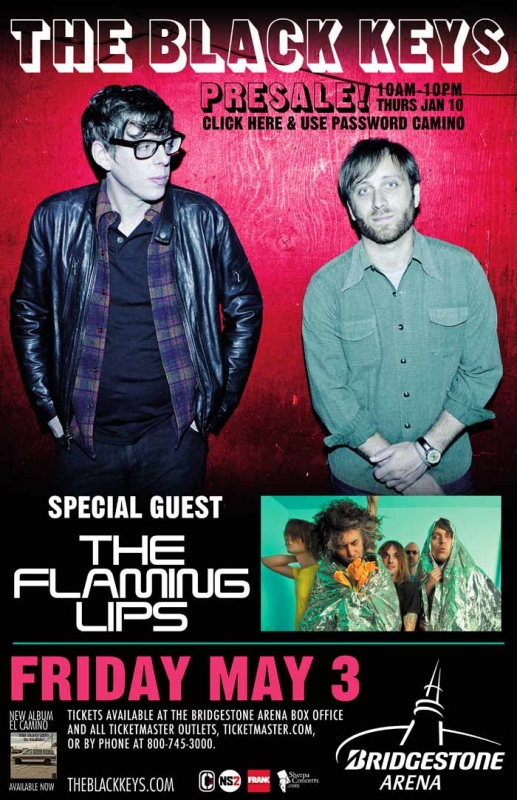 Other Lips/Keys dates announced include:

Are you excited about the show? Do you think The Black Keys can translate their small venue charm from back in the day to a big arena setting? Do you think this hurts our chances of catching the duo at Bonnaroo now? Let us know your thoughts in the comments!