Today in Media-Manufactured Celebrity Beef: The Black Keys vs. Bieber

So, as I’m sure you’re all well-aware, our hometown (by way of Ohio) boys The Black Keys took home 3 of the 5 Grammy awards they were nominated for on Sunday (and Dan Auerbach nabbed Producer of the Year). They also gave a fantastic performance with Dr. John and The Preservation Hall Jazz Band during the ceremony (check out a crappy stream below)! On the other hand, teen pop superstar Justin Bieber (who recently performed at Bridgestone Arena) was not nominated for any awards this year, nor did he attend the ceremony. The singer was nominated for Best New Artist and Best Pop Vocal Album in 2011, neither of which he won. Apparently, he attempted some sort of livestream for fans during the ceremony (in protest because he got “snubbed?” I’m not entirely sure- I’m not a true Belieber), but faced some technical difficulties.

Here’s the dumb gossip news. Apparently, while Keys drummer Patrick Carney was leaving the show, TMZ’s camera crew descended upon to ask him very pertinent questions about his win, like “Do you think Justin Bieber should have been nominated?” As the drummer politely signed autographs and attempted to answer slightly more legitimate questions, TMZ proceeded to pry for his opinion on this pressing matter, so Carney finally offered up his honest answer: “He’s rich, right?… Grammys are for music, not for money, and he’s making a lot of money. He should be happy, I guess.” It should also be noted that the following question was “What are your plans for the immediate future?” and Carney’s response was “I want to open a Whataburger,” so, clearly, he was taking the whole thing very seriously. Check out a video of the whole encounter here. 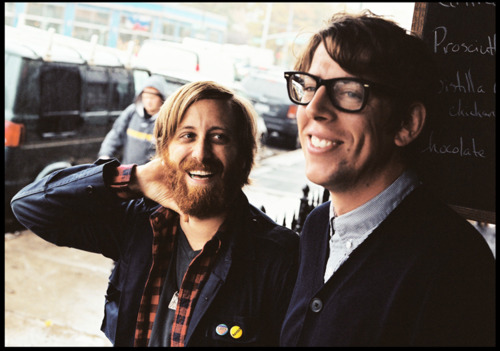 TMZ, as they like to do, sensationalized and fixated on this encounter, and it spread around through entertainment and gossip sites last night. Patrick’s Twitter response can be seen below:

And, of course, Justin Bieber caught wind of this. And of course he didn’t understand the context or sensationalizing of the situation. So of course he got angry. Here’s his response from earlier today:

And Patrick’s response, as the rabid army of preteen Belibers descended upon him and his band:

Biber’s response has sparked another round of media attention, because why not pretend like this matters (and hey, technically we’re writing about it too)? I’d expect that the Belibers will have forgotten about the whole thing by tomorrow, pending TMZ finds some more headlines, while The Black Keys will go back to polishing their well-deserved Grammys and Bieber will go back to consoling his “snub” by speeding around in his Ferrari.

You can catch The Black Keys at Bridgestone Arena in Nashville, along with The Flaming Lips, on Friday, May 3.