It was another amazing weekend, and another awesome season for East Nashville Underground.  We divided and conquered this season, so we’ll be giving you a rundown from a few different voices.  Matt took on Friday night, Jessika had Saturday day, and Andrew dragged his ass into Saturday night.  It was a hell of a good time, and we are already excited for the winter time sesh. 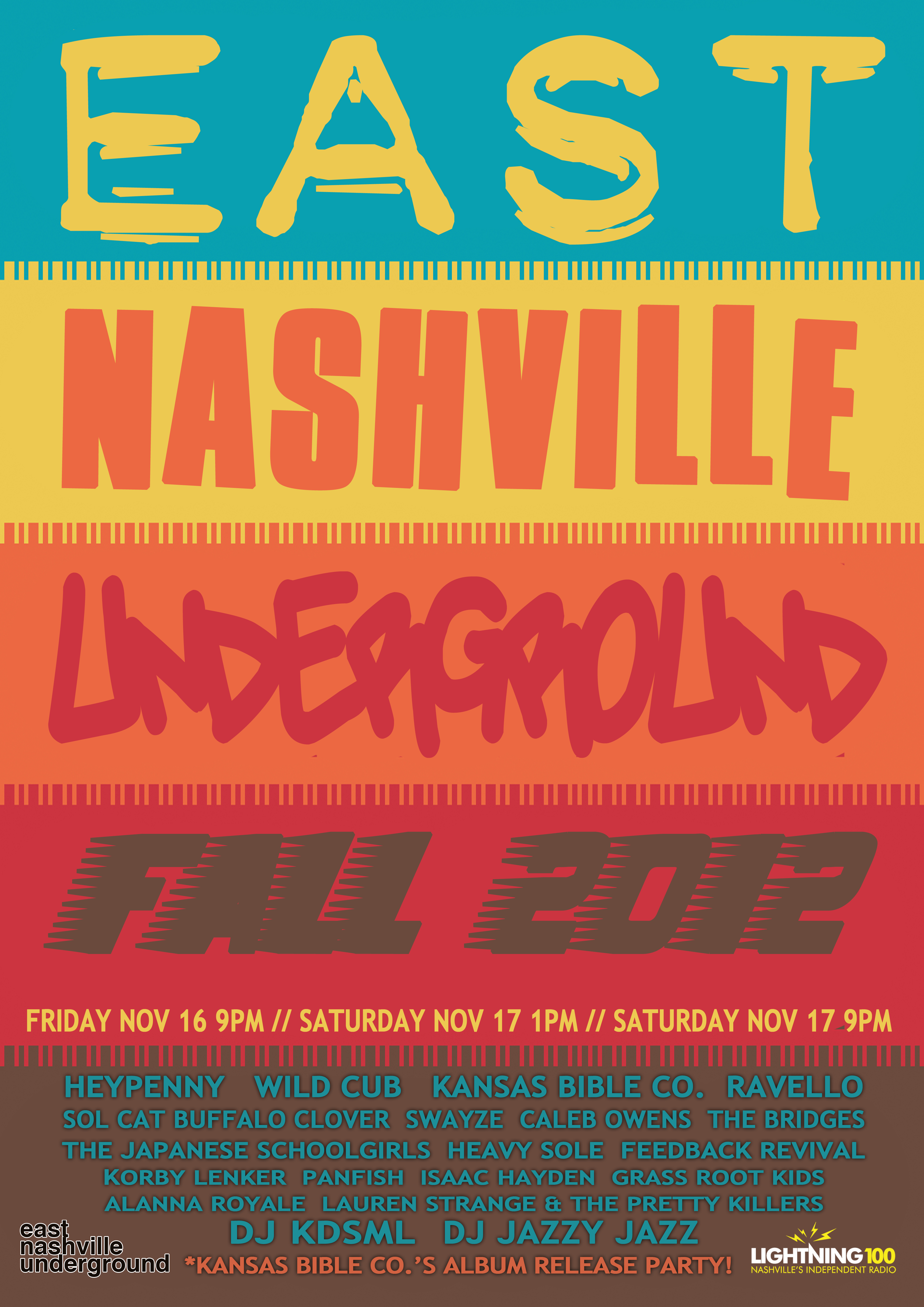 Full disclosure, Andrew was with me on Friday, and we had maybe a little bit too much fun (if there is such a thing).  We rolled in right after Feedback Revival‘s set on Friday night, but just in time to check out Caleb Owens.  I guess I was pretty surprised by Caleb.  I’ve heard quite a bit of his music, but I’ve never seen him live before.  There’s a lot more rocking in this songwriter than I expected.  If you get the chance to see him, I would recommend it.  Thee Japanese Schoolgirls are NOT Japanese Schoolgirls.  I’m not saying I was let down, but it might be funny to see those grown ass bearded beer drinkers in the aforementioned attire.  Actually, that might just be incredibly awkward for this pretty solid rock n’ roll group.  The Bridges are just awesome.  All harmonized and lovely like a family band should be.  If you haven’t seen them yet, you are in for a real treat.  Wild Cub is a force.  They are without a doubt one of the most impressive emerging bands in Nashville right now, and their impossible-not-to-dance pop is something that you may not be able to see around here weekly on the cheap for much longer.  Heypenny had quit the challenge in following Keegan and co., but they took that challenge and slapped it around with another amazingly fun set of pop tunes.  Dancy, DJ tunes aren’t really my MO, but from the look of the highly intoxicated crowd at that point,  KDSML really kicked ass, and was the perfect ending to a perfect opening night.  I’m drunk, and must go home now.  Thank you ENU, and thank you to the very friendly (to remain nameless) metal loving bartender who gave us a ride home.

This was my first ENU and I can say it definitely surpassed all my expectations. In what other setting can you be workin’ on your buzz before the sun goes down surrounded by folks that are 1. friendly and 2. not assembled due to mutual interest in football or horse racing? I won’t say ENU is like Steeplechase for those with a soul — but I will say it was hands down one of the best spent afternoons I can actively recall. We were promised the “Day Show” or “Brunch Show” or “Before Sunset Set” was gonna’ have a great vibe and that proved 100% true. We had a ton of fun live-tweeting on the projection screen (‘cept for what was up with that girl-on-girl violence with the “I generally don’t like female-fronted bands” comment? A qualified compliment is not really a compliment, it’s just misogyny, but I digress).

We were a little late to the party but headed in on the tail-end of Grass Root Kids who were apparently a surprise crowd-favorite so check ’em out. After grabbing drinks, we were stoked to get a good seat before Alanna Royale took the stage and subsequently called our lazy asses out and summoned us to our feet to fully appreciate her grooviness. And appreciate it we did indeed. We were thrilled to hear “Listen To Your Momma” which we have been appreciating for a while thanks to a video by Lauren Napier taken at the 5 Spot (see below) as well as other newer songs slated for appearance on their EP which is scheduled for an early 2013 release. A highlight was definitely the original “Tennessee Heat” and a stellar cover of Amy Winehouse’s “Valerie.”

It’s official, I’ve got a great, big, band crush on Alanna Royale and I’m totally enamored with the whole ENU crew. So while it’s probably more fashionable to be all derisive and snarky, I’m filled with enthusiasm and inspired by a very cool local enterprise. Well done, ENU, well done – and thanks for the t-shirt!

Well, I have to start by saying that I must be getting old, or I’m starting to feel older anyway, because I needed most of Saturday to recover from Friday Night of the East Nashville Underground Festival. Maybe I can’t hang with the youngins anymore.

So I missed the Saturday day session and didn’t make it out to the Saturday night festivities until around 11 pm, just in time to catch Bowling Green’s Billy Swayze. I perched a spot stage right, which was the right place to dissect the Swayze persona.  He’s quite the enigmatic character on stage.  I was nervous at first because his legs were tangled in his guitar chords and his tight blue jeans looked like they were going to cut off his blood circulation. But he danced and shook his way out of trouble and his blood seemed to flow fluidly as he cranked out blues-rock riffs and belted love-inspired, soulful lyrics into the mic. My friend Gabe pointed out that the lead guitar player for Billy Swayze looked like Andre the Giant‘s nephew, mostly because of his curly locks. He was shredding away and nailing lead riffs like his life depended on it, and even made it over to Billy’s side of the stage to sing backup for one song. Swayze’s music is definitely blues and 50s pop-rock influenced, and it’s performed with sincere feeling and exquisite energy. It seemed like he was dancing and moving so much that he could jump out of his skin at any moment. Check out the music below:

Next was Kansas Bible Company. There are 11 people in their band, including a four-deep horn section, so it seemed like their was an army of musicians on stage. Someone tweeted on the live twitter feed on the projection screen that they knew that they had taken advantage of an open bar, but they still wondered if they were seeing double when they watched KCB. With that many members, you expect a great live show and a fun time, and they delivered both. Their horn section performed choreographed dance moves: they occasionally danced together and then suddenly all froze when the music stopped, as if time stopped, and then danced again. They closed their set last night with the song “How To Build A Planet.” If people could build planets by jumping up and down, than the ENU crowd might have built three with the energy that KCB brought to the festival. Check out the music video for that song below:

And then I went home. I’m old. The ENU energy kicked my ass. Tweet about it.