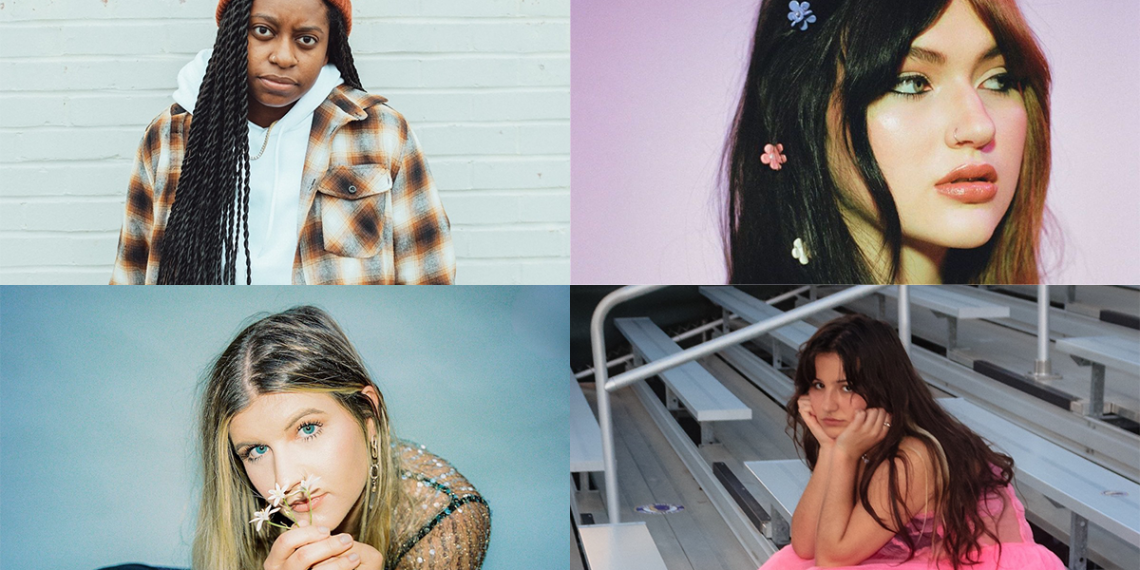 Bonnaroo has spent the last few years really upping their game in the campground plaza areas, moving some of the smaller performances (anyone remember the On Tap Lounge, Sonic Stage, and Soloar Stage?) out of Centeroo proper, with lots of cool acts you don’t want to sleep on. If there’s one campground event of the weekend to make a priority, though, it’s the Women of Nashville showcase, presented by She Is Music, Thursday in SheRoo! Part of the Community Camping area, SheRoo is meant to be a space for Woman and non-binary identified Bonnaroovians to camp alongside one another, but boasts events like this throughout the weekend that are open to anyone. Since the showcase is billed as a singular event (expect four short performances of about 30 minutes in length with a ten or so minute changeover), we’re presenting it to you as a single Artist Spotlight, but we still wanted to give you a separate rundown for each of this incredible, local artists! (Note: if you’re looking for exact set times, we’d keep an eye on the social media for each artist.)

Of these four performers, we’ve been covering Daisha McBride the longest, as we’ve watched her become one of the best and most important hip hop artists in the Music City scene. Also known as “The Rap Girl,” McBride, who hails originally from Knoxville, has collabed with not only a who’s who of local rap talent like Mike Floss, Lackhoney, and nobigdyl., but also an eclectic collection of artists of other genres, like ex-Mutemath drummer Darren King, pop singer Rosemary Joaquin, EDM pop singer Freak Daddy, and countless others. A clever lyricist with a smooth and versatile flow, and a penchant for exploring all kinds of sonic territory across the numerous releases she’s graced us with over the years, McBride is not only a perfect ringer for nearly any song in need of a featured verse, but also an incredibly compelling and original artist with her own work, commanding buzz for tunes like “Dolla$,” “On for the Night,” “Pump Fake,” and “Get Ugly.” One of the best rappers at all of Bonnaroo this year just so happens to be performing in the campground- don’t sleep on her!

Raised in Dallas and enamored by soul and r&b legends like Aretha Franklin from a young age, buzzy teen pop singer GAYLE began traveling to Nashville, performing, and writing as a preteen, eventually convincing her family to relocate when she was only 12. Soon mentored by famed songwriter and publisher Kara DioGuardi, GAYLE’s music adopted an edgy, electronic-infused indie pop sound by the time she released her first single, “dumbass,” early last year, which we premiered the budding star’s first-ever music video for. Confessional, unfiltered, and surprisingly self-aware for her young age (GAYLE is now 17, and her style and edginess will no doubt draw comparisons to fellow teen breakout Billie Eilish and Olivia Rodrigo), a string of independent singles- “z,” “happy for you,” and “orange peel”- kept her buzz growing throughout the pandemic, and eventually landed her a major label deal with Atlantic, who released the singer’s latest (and best, so far) single and video, “abcdefu,” earlier this month. Like all of GAYLE’s work, it’s honest, blunt, thoroughly cool and of the moment, and extremely catchy, setting the stage for her debut album or EP- whenever that might arrive- to be a breakout hit.

Since arriving in Nashville in 2017 from her native Orlando, indie pop singer Gatlin has experienced not only a period of personal growth and change in her life and worldview, but also one in her music, settling on a sort of Maggie Rogers-esque folk pop on her excellent 2020 debut EP, Sugercoated, only to experiment with a more lush, ethereal, and electro-infused sound on her latest, this year’s To Remind Me of Home (standout single and album opener, “What If I Love You,” one of our absolute favorite jams of 2021 so far, could almost pass for a new cut from CHVRCHES). We were big fans of Sugarcoated, but with To Remind Me, Gatlin sounds like an artist truly finding her stride, both in her stylistic approach and also in her story-driven lyricism, giving way to vulnerability, and exuding confidence and self-actualization in how she presents his feelings and themes. Needless to say, we’re dying to hear this new stuff live, and encourage you to do the same at Bonnaroo!

Though she first found national recognition as a teen contestant on singing competition The Voice in 2018, pop singer-songwriter Abby Cates, who hails from Cincinnati but has since relocated to Nashville to attend Belmont and pursue her musical career, only recently made her formal debut as a solo artist. After some post-Voice years of cultivating a social media following uploading cover songs and original snippets, Cates, who spent her youth performing in musicals and mastering a variety of instruments, dropped a lovely and folk-drenched first single, “Roadtripsong,” earlier this summer. Last month, she further showcased her range (and continued to flex her incredible vocal prowess) with “Better Friends,” a poppier, more propulsive tune we think better embodies Cates’ personality and feels more contemporary and original. Though her output is limited, it’s an incredibly promising start, which means we’ll definitely be keeping an eye on what’s next from Abby Cates after her Bonnaroo debut!