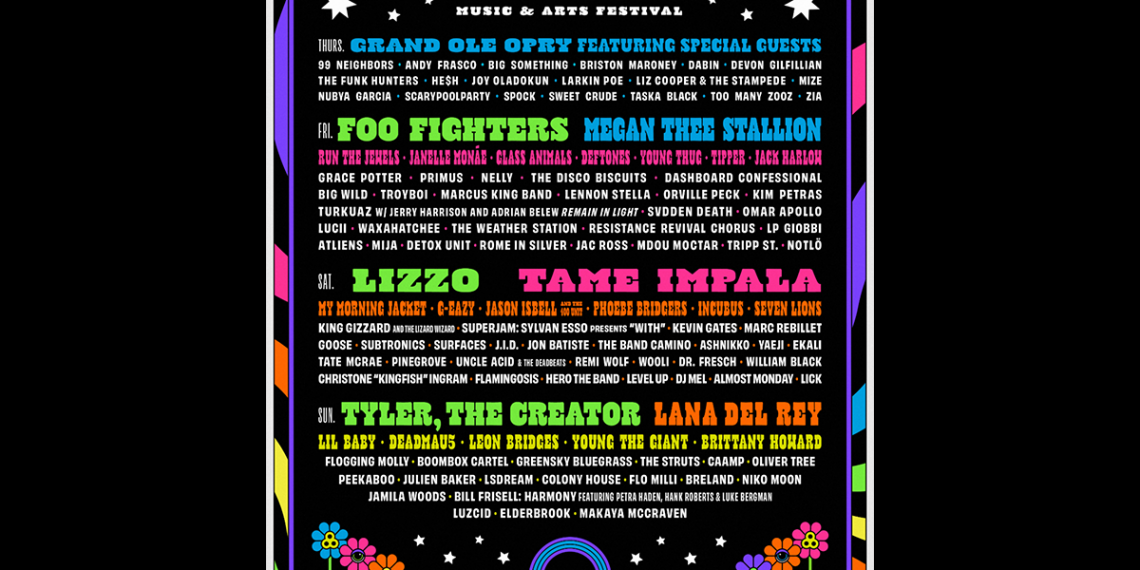 Bonnaroo is back, and with a stacked 2021 lineup that reminds us a lot of last year’s canceled fest!

With America’s vaccination efforts proceeding at an optimistically fast clip, making Covid inoculation realistically attainable for every adult by, at least, summer, the 2021 live music landscape is, finally, coming better into focus, with small to mid-sized shows mere months from being safe and back to normal once more, and, with a few months of self-control and a little luck, larger festivals once again poised to resume later in the year.

As similar events have begun dropping lineups, and even a new “Concerts on the Farm” series recently announced, we’ve been cautiously optimistic that our favorite summer fest and by far the largest in the area, Bonnaroo, would be able to make their postponed 2021 dates of Sept. 2-5, marking the 20th anniversary of the beloved fest. Thankfully, ‘Roo is poised to do just that, having just officially announced their 2021 slate, retaining many of the artists from last year’s postponed then ultimately canceled fest, with Foo Fighters, Megan Thee Stallion, Lizzo, Tame Impala, Tyler the Creator, and Lana Del Rey all topping the bill, and the Grand Ole Opry, Run the Jewels, Janelle Monae, Young Thug, Deftones, Phoebe Bridgers, Jason Isbell, Incubus, Lil Baby, Deadmau5, Jack Harlow, Dashboard Confessional, Orville Peck, Waxahatchee, Pinegrove, Flogging Molly, Julien Baker, and many more filling out the undercard slots. Notably absent from 2020’s would-be ‘Roo are Tool, Miley Cyrus, Bassnectar, The 1975, Flume, Oysterhead, Tenacious D, Vampire Weekend, and several other big-draw names, but we’re certain that’s all due to scheduling conflicts, as last year’s event managed to sell out in record time before the pandemic brought festival season to a halt.

In a bit of a surprise move, tickets are set to go on sale today, March 31 at 12 p.m. CDT, with typical GA to premium tiers all available here. Parking and transport options have also been overhauled, with more flexibility and upgrade potential, and with a new daily entry system which will stagger arrivals (and incentive those who want a closer camping spot to arrive earlier). As last year’s fest sold out in record time, and ticket-holders were allowed to roll their spot into 2021, we imagine capacity is going to be much more limited this year, even without any official announcement of it being reduced for Covid restrictions.

In an ongoing effort to tweak the experience, the fest has announced some other changes for 2021, including an intriguing sounding free public transit system around the grounds, a reworked campground layout to bring everyone closer to Centeroo, air-conditioned tents for rent at all ticket levels, the aforementioned staggered daily entry, new daily shuttles from Chattanooga, upgrades to the Which Stage, and more! Curiously absent, however, are any real specific details for new safety procedures (aside from a general statement about taking “enhanced health and safety measures”), or any mention of (much-rumored, but likely difficult to implement) proof of vaccination efforts for attendees supposedly being considered by festival promoters around the nation, though we are told that “As it approaches, Bonnaroovians will receive regular updates with the important information needed to plan their trip to The Farm, including any changes to policies and procedures they’ll need to know before entering the festival and campgrounds.”

One other notable piece of news, is that, like much of the entertainment world, Bonnaroo is getting in on the NFT action, making them the first major festival to produce an NFT collection, which is available here.

And finally, here’s the full Bonnaroo 2021 lineup so far (if past years are any indication, we should see some club stage acts, comedians, and the slate for The Other stage to arrive later):

A disclaimer: Whether or not events the scale of Bonnaroo will be medically advisable by health experts even by September is, at present, still unknown, and will henge a lot on continued social distancing, vaccine adoption, and a little luck that a new or mutated wave of Covid doesn’t set us back between now and then. We, surely like all of you, very much hope to find some normalcy in the live music experience soon, and advise you to consider your personal health and the advice of medical experts before making a decision to spend time in such a large crowd of people from such a wide geographic spread. By informing you of this event, we are not making an endorsement of its safety, nor or are explicitly encouraging you to go at this time- please make that decision using the most accurate, unbiased professional information available.