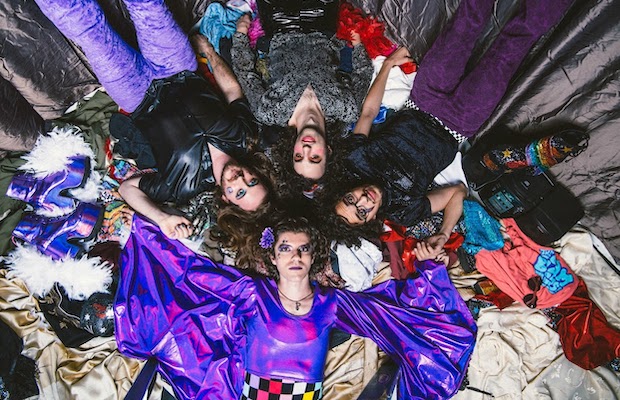 If you keep up with our local show recommendations, you’ve almost certainly seen us mention rising local glam rock outfit The Blam Blams in recent years, who, since first coming together in late 2017, have become an increasingly buzzworthy fixture in Nashville and beyond.

The glitter-soaked combo have, already, amassed a reputation for their theatrical, harmony-soaked, and dazzling live performances, despite only an EP’s worth of tracks out so far. Largely influenced by ’60s psych-pop and ’70s glam and rock staples like Bowie and Queen, it should come as no surprise that the band’s forthcoming debut LP, Opening Night, which is due out May 22, is a concept album, and ahead of its release, we’re very excited to bring you an exclusive premiere of brand new single “Isabella”!

With the album set to tackle themes of sexuality (3/4 of the members are queer), gender, love and living without a mask, we’re told the conceptual theme, as told by a narrator, “explores the life of Sydney Fabel, the record’s fictional protagonist,” who is “a bisexual actor/ artist in 1970’s London is stepping out onto the stage both literally and figuratively as he begins to discover his own agency amidst starring in a production with the Galactic Theater company.”

The subject of this single, the band explain that the character of “Isabella was Sydney’s girlfriend when he founded his theatre company, and this song introduces his relationship with her. The narrator describes Sydney’s infatuation with wearing his girlfriend’s clothes when she’s out of the house.”

In line with the band’s previous work, “Isabella” is soaked with retro flair, awash with psychedelic harmonies, old school arrangements, and tons of theatrical, earnest, musical spirit, and hooks that’ll stay in your head for days. Though, originally, the group were set to celebrate it with a release show this weekend, in light of the current state of live music as we all lock down for COVID-19, we’re told a virtual concert is in the works instead. Keep an eye on the social media links below for the latest updates, and stream “Isabella” now!