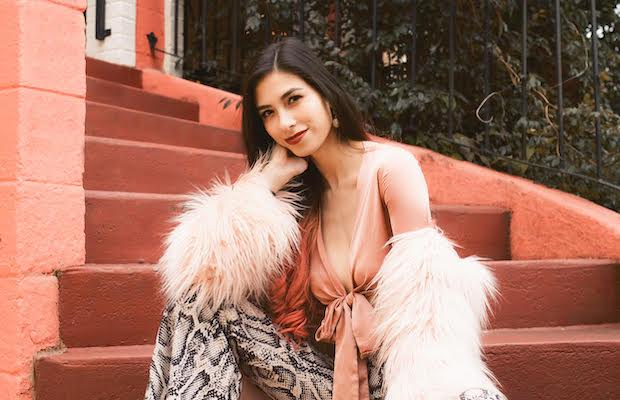 At this point, it’s no secret that Nashville’s pop scene is one of the coolest, most vibrant, and creative you’ll find anywhere, and it seems like we’re constantly singing the praises of the next new buzzworthy artist who feels poised to break out in a widespread way. Not often though, does a local pop singer seem already so primed for stardom in every way, while at the same time retaining so much authenticity and personality in their artistic style and vision as up and comer Brooke Alexx.

Though not exactly brand new to the scene- she has a background in musical theater, and has been releasing solo music for several years now, but really seemed to double down on honing her stylish, electric, and contemporary pop sound since relocating to Nashville- Alexx captured our attention and amassed hundreds of thousands of streams in the past couple of years thanks to a series of singles (particularly breakout tune “Bored”) and last year’s debut EP, Me.

Presented with only her stunningly polished and well-produced music video efforts, her bright and vibrant visual style (both in promo and album art, as well as her popstar worthy fashion choices), the push and buzz around her recent musical work (including a prominent local billboard for her EP), and her classic pop penchant for incorporating dancers and flair into live shows and videos (something smaller indie pop singers have seemed to shy away from over the years), you’d already think Brooke was as famous and accomplished a pop singer in the league of her influences like Tove Styrke, Charli XCX, or even Taylor Swift. And unlike some young artists who simply seem to be copying the motions to try to embody that performer ethos, Alexx does already feel like she’s on that level, a true and natural and charismatic pop singer with an incredible, inherent talent and such a naturally cool knack for personal aesthetic.

It’s only been about six months since her EP dropped, but Brooke has apparently been keeping busy, crafting a new wave of songs which will each be accompanied by a music video in the coming months. Her first, “Downplay,” which arrived this week (and, we’re told, has a video forthcoming very soon) is already a slight stylistic departure, taking cues from Swedish pop music with hints of reggae and plenty of electronic, dance-primed flourish. Co-produced by Israeli producer Yuval Maayan and LA-based producer ARYAY, the tune is just the latest example of Brooke Alexx’s genre-bending style, modern in the right ways but timeless enough not to feel like it’s jumping on any certain musical bandwagon, bound by the singer’s clever and earnest lyrical knack (we’re always suckers for a sad and personal song with an upbeat groove), and the latest affirmation that she’s well on the way to becoming a massive, breakout talent. Hear “Downplay” below right now, and find it on your streaming platform of choice!