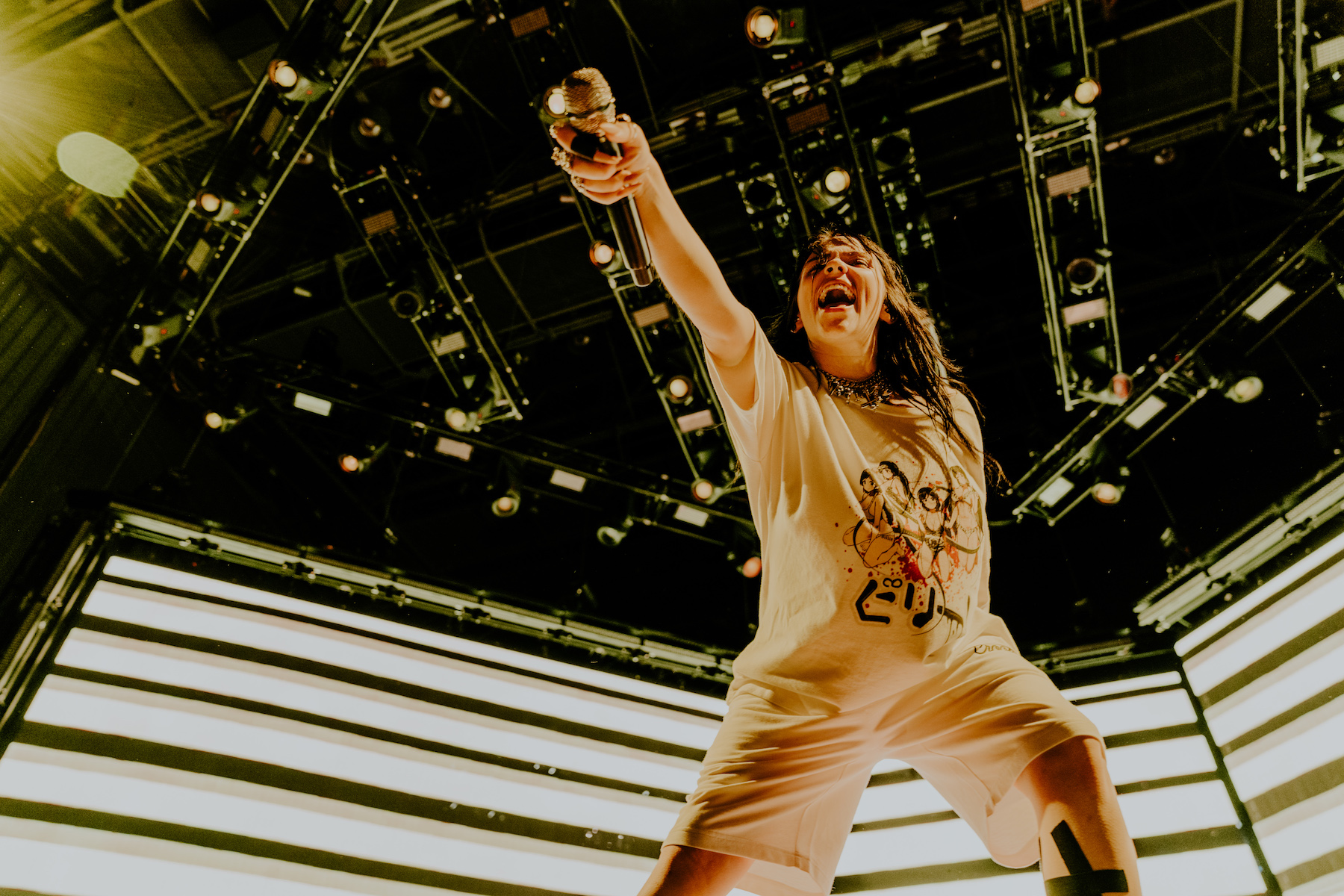 When alt-pop breakout star Billie Eilish took the stage Friday night at Ascend Amphitheater, hours after her headlining Nashville debut was intended to start, greeted by a soaking wet crowd, I was honestly a little shocked the show was still happening. But the young LA singer’s perseverance and professionalism, combined with her fans’ enduring devotion, managed to instantly make the intense storm of the prior few hours seem like a distant memory, and to transform the evening into one of the most impressive, earnest, and triumphant major Music City debuts of any artist in recent memory.

Billie’s been on our radar for a few years thanks to her extremely impressive early tracks, but it was a main stage turn last summer at Bonnaroo that really cemented the now 17-year-old’s status in my mind as one of music’s new major artists, with the potential for a monumental, legendary career. And after the recent release of her phenomenal debut album, When We All Fall Asleep, Where Do We Go?, earlier this year, I’d say that legacy is all but assured. She’s not just one of the standout new pop artists of her generation, but seems like a transcendent, larger-than-life figure primed for musical greatness, and given the wildly enthusiastic response from this weekend’s sold-out crowd, I’d say I’m hardly alone in my optimism about her limitless future ahead.

Originally meant to feature Denzel Curry (another fave I’m bummed to have missed), severe storms right as the show would’ve started forced promoters to postpone things and fans to flee to their cars and nearby parking structures. I’ve seen many an event rained out for less, but either Billie or organizers or both must’ve been really determined to make this thing happen, since, after a few hours, the all-clear was given, and Eilish was able to take the stage, unfortunately without an opener, just after 10 p.m. Those lucky enough to have stuck around (and by my estimation, it was most of the audience, probably 80%) piled in in ponchos and rain-soaked attire, brimming with anticipation as workers mopped puddles from the stage and prepped for the show. Fortunate enough to live nearby, I waited out the worst of it at home, and took my seat not long before the singer finally emerged.

Decked out in all white in her signature baggy attire, legs braced by medical tape, illuminated by one of the most dynamic, bright, and impressive lighting rigs I’ve ever seen used in this modest-sized amphitheater, Eilish felt like a superstar from the first note, launching into her breakout hit “bad guy” while jumping around and maneuvering the slippery stage with unbridled energy. Backed by a sparse band of her brother and co-writer Finneas (who, both in their creative dynamic and live, felt more like the other half of a musical duo than a bandleader and collaborator) on keys and guitar along with a drummer, the singer’s powerhouse vocals (talent that perhaps gets overshadowed by her image and unique sound) sounded better than ever, a marked improvement from her already-great turn at Bonnaroo.

Unsurprisingly, the generous set (I was sure it was getting condensed due to curfew, but she seemed to have been allowed to play the whole thing, making for one of the later performances I’ve experienced at this urban, outdoor venue) featured the bulk of When We All Fall Asleep, but also rewarded long-time fans too with plenty of cuts from breakout mini album Don’t Smile at Me. Though the online and artistic persona Eilish has crafted is a pretty enigmatic and intensely cool one, it was endearing to see how much more carefree and unguarded the young seemer seemed live; at once a performer immensely aware of and deliberate in how she comes across, but also a teen clearly having the time of her life with all of this, bowed over by the palpable love and support of her fans.

Standout songs included “you should see me in a crown,” “bellyache,” and “xanny,” but perhaps the most heartfelt and lovely point of the whole show came when Billie and Finneas performed ballad “i love you,” while floating in a recreation of the bed from her childhood room where they sat and wrote and recorded the entire album themselves (another feat that is mind-blowingly impressive), lit against a stunning backdrop of the moon. And then, ramping up the energy to close out the night, ending with a run of her buzziest singles of all, “ocean eyes,” “when the party’s over,” and “bury a friend.”

A night that started as a potential bummer, which I cynically thought would mean no show at all was transformed into one of the most magical, impressive, and memorable shows of the year thanks to the talent and magnetism of Billie Eilish. I have no doubt her next stop in Music City will be a headliner somewhere significantly bigger like Bridgestone, and while Ascend is hardly small, it was still really special and comparatively intimate to see the young performer absolutely stun at a smaller venue at such an exciting and pivotal moment in her burgeoning career. We were fans before, but consider us devotees now; we’ll be anxiously awaiting what one of this generation’s most impressive and deserving stars does next.