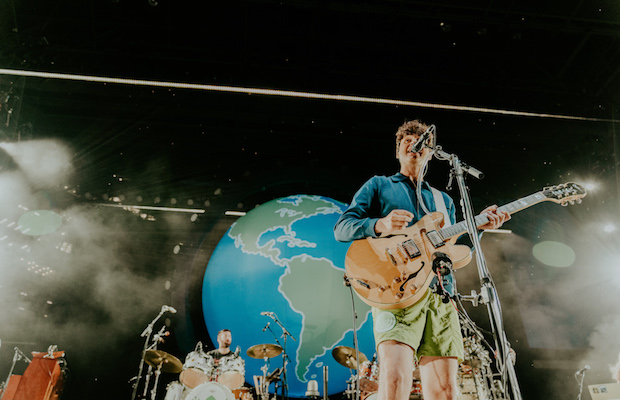 Nearly six years had passed between Vampire Weekend‘s last Music City outing- a 2013 stop at The Ryman Auditorium- and their recent return, to headline Ascend Amphitheater with Chicano Batman, in support of their stellar new album and first release in just as long, Father of the Bride. To put that in perspective, it’s been roughly half the band’s existence since we last caught them in Nashville (though they notably appeared at Bonnaroo a year later), and with changes in personnel, sound, creative approach, the popular musical landscape, and the culture and society of the world at large that have taken place in the interim, that time off only seemed to serve to make them better, weirder, looser, and all the more profound and essential, making for, without a doubt, the best Vampire Weekend performance we’ve ever seen. Read on for our rundown of the group’s long-overdue return to town, along with some great photos of the captivating outing!

Still very much coming down from the haze and exhaustion that is Bonnaroo, and processing the dozens of performances I’d just watched over a few short days, few concerts would pull me back out so soon amidst a much-needed week of rest. Vampire Weekend, however, proved too exciting to pass up- especially on the heels of the masterpiece that is Father of the Bride, which has dominated my musical rotation this summer, and might be 2019’s greatest rock record so far, in a year where pop and hip hop seem to be churning out the most interesting works.

Back when Vampire Weekend first hit the scene, I was an early 20-something obsessed with all of the indie rock of the mid to late ’00s, pouring daily over hipster-leaning blogs and always searching for the next cool, underground, era-defining act. Hardly obscure, the Vampire Weekend were famously landing magazine covers before they’d even dropped an album, but I was undeniably hooked from those earliest days, mesmerized by songs like “Cape Cod Kwassa Kwassa” and “Oxford Comma,” and leapt at the chance to see them on their first major tour more than a decade ago, front and center in an intimate venue in Washington, DC. I’d seen some fantastic subsequent shows, especially as their catalogue grew over the years, but nothing managed to touch the magic of that first performance- until now.

Arriving right on time, I was greeting by the band’s giant inflatable frog outside of the venue- a recurring visual element of this record cycle- and settled into my seat in time to study the huge, inflatable globe that would later serve as their backdrop. Admiring the noticeably diverse crowd, not just in gender and race, but also in age, from young children to practically elderly concertgoers, I was glad to see that everyone was on the same chill wavelength, largely remaining seated and politely attentive as openers Chicano Batman took the stage. I’ve seen the LA group a few times in festival settings, and their psychedelic soul sound is always wonderfully vibey and retro. Admittedly, I haven’t given their records much time, but their genre-bending worldly sonic palette made them feel like a perfectly complimentary fit for Vampire Weekend, and left me itching to finally give their music some overdue spins. 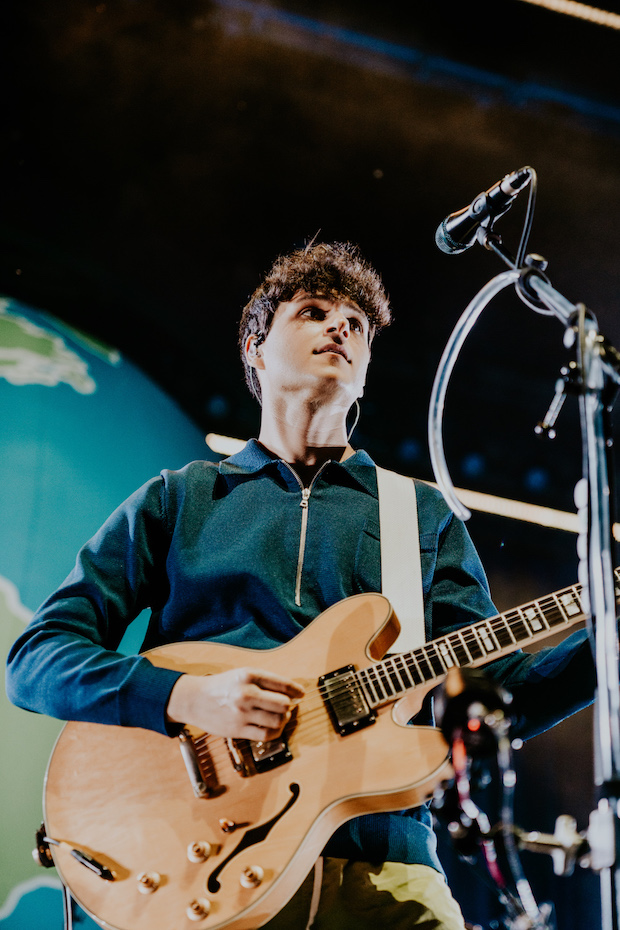 Not long after Chicano Batman concluded their excellent opening set, Vampire Weekend emerged on stage, kicking off a staggeringly gigantic performance with an old favorite, “Mansard Roof.” It’s been a few years now since founding member Rostam Batmanglij announced his departure (though he apparently remained somewhat creatively involved behind the scenes for their new record), but this was my first time seeing them play without him, and I was very curious how it would affect their dynamic. Like some other bands recently absent a key multi-instrumentalist (Death Cab For Cutie come to mind), the group wisely opted to take the opportunity to rethink their live configuration entirely, filling things out with a backing guitarist, keyboard player, multi-instrumentalist, and additional drummer/percussionist, effectively doubling their personnel, and adequately equipping themselves to most accurately tackle the layered, gargantuan magnum opus that is Father of the Bride, which features countless extra players and contributors.

A true labor of love and maximum effort, it was reported that frontman Ezra Koenig spent several years meticulously writing and researching for the band’s latest LP, spending time in colleges, at studios across the world, and collaborating and obsessing over creatives from a wide swath of backgrounds, crafting something that, though still feels rooted in what makes Vampire Weekend Vampire Weekend, manages to sonically and creatively transcend everything that came before it, weaving between genres from song to song (and even within single tracks) with the ambition of The Beatles’ White Album, exploring soul, pop, folk, r&b, art rock, and even jam music with unbelievable ambition, and all landing as a cohesive, conceptual, spry and springtime-appropriate work that weaves meta-narratives of the band’s past into something wholly unique and transcendent. Sometimes albums like that can be nearly impossible to translate live, but Vampire Weekend, with their new, supersized configuration, managed to do so to stunning affect, tackling ten of the album’s sprawling 18 tracks, while still finding time to fit in another 18 from their beloved past three efforts, as well as a weird and fun cover of Bruce Springsteen’s “I’m Goin’ Down.” 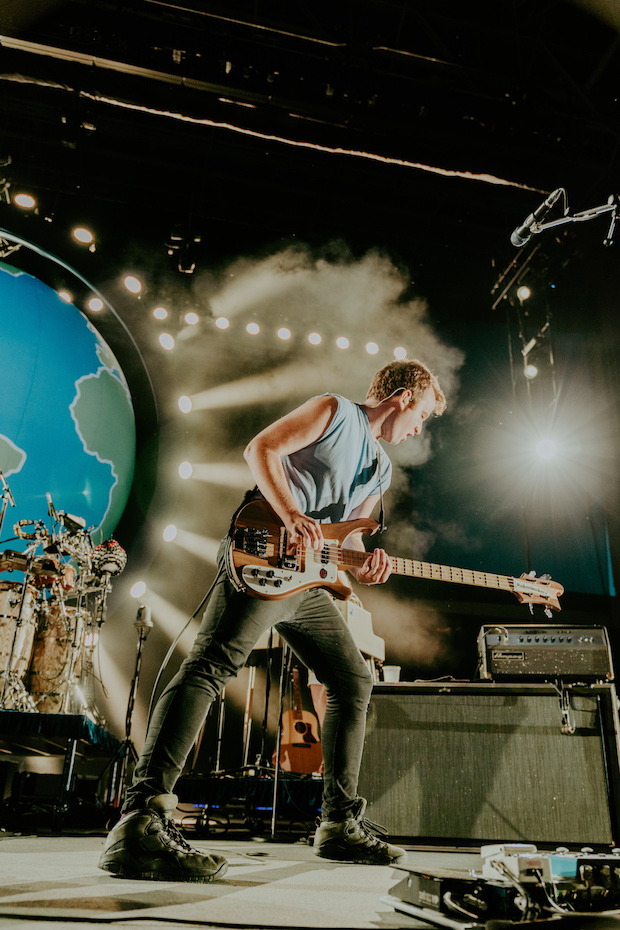 Still looking every bit the art-inclined Ivy League intellectual, and somehow not having aged a day over the last decade, casually decked out in muted neon shorts and a jacket, Koenig felt looser and more refined than ever before, serving as something of a conductor for the talented and intricately layered stage of players, as they worked through what is, apparently, an ever-evolving setlist, not just in song selection but also song presentation, frequently taking opportunities to extend arrangements, incorporate new motifs (like slotting “Son of a Preacher Man” into “Obvious Bicycle”), and straight up jam, even breaking out a talk box, finding some weird, wonderful medium between jam band, prog rockers, and indie hipster icons- a mix I wouldn’t have ever dreamed would prove so captivating.

Older favorites, of course, elicited some of the loudest cheers, singalongs, and Instagram clips, with tunes like “Cape Cod Kwassa Kwassa,” “Step,” “Holiday,” “Unbelievers,” “A-Punk,” and “Diane Young” all standing out and feeling as relevant and resonant as ever. But it was the brand new stuff- “Unbearably White,” “Sunflower,” “2021,” and “Harmony Hall”- especially, that felt so elevated and transcendent; and that’s coming from someone who usually feels the exact opposite about an abundance of new music on tour. Some bands disappear for a few years only to come back with a need to rebuild and find their their groove again, but there’s no doubt Vampire Weekend took their break as an opportunity to retool everything that made them so special in the first place, and to pour more time and energy into their art than ever, unthread from other obligations and able to return as something better than when they left. The result was stunning, and, as I said before, the most fresh and magical experience I’ve had with the band since my first time seeing them more than a decade ago. 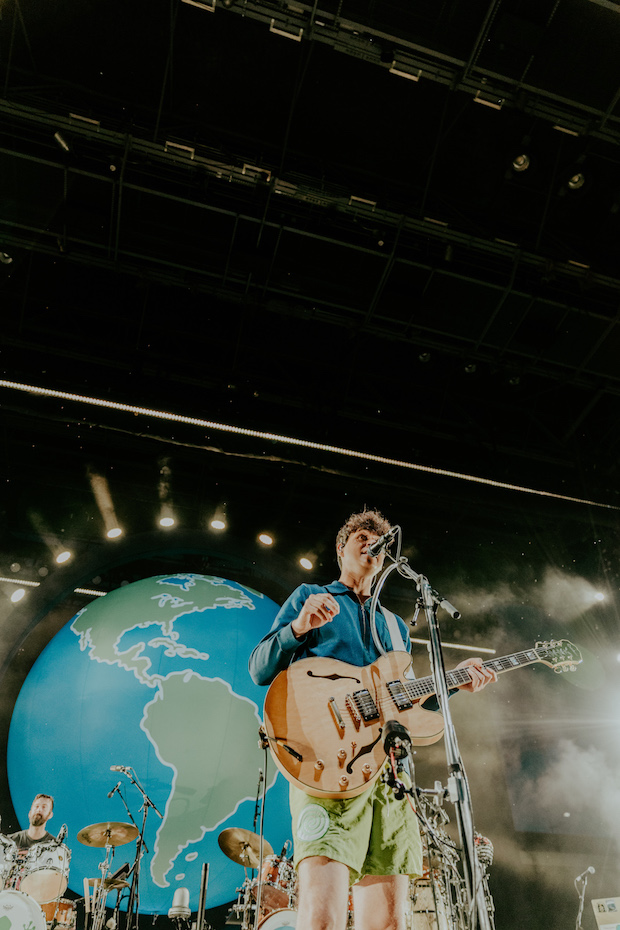 By the time they got to groovy closer “Ya Hey,” the band had clocked well over 90 minutes, and returned for an extended encore, where they took a few requests from anyone wearing a bucket hat, adding “Oxford Comma” (“I thought we might get away without playing it tonight,” Ezra quipped) and “Hannah Hunt” to the set. Nearing two hours and creeping up on the venue’s firm curfew, I was stunned by how epic (in length and presentation) this performance was, rare for a band who only have 10 years of material, and also rare in how captivated I was for every second of it (often only the case for performances so long from decades-spanning legacy acts). It felt like Vampire Weekend are as sincerely excited to be touring again as their fans- who’ve only seemed to grow in the six years between records- are to have them back, and what they’re doing live right now is something truly special, heartfelt, and phenomenal, a labor of love and triumphant evolution, a second wind for a band who’ve already proven themselves time and time again, but who, clearly, have so much great, career-defining art still to make. I hope it won’t be so long until I get another chance to see Vampire Weekend live, but this show was truly everything I’ve been missing and then some. If they’re coming anywhere else close to you, Vampire Weekend’s Father of the Bride tour is, without a doubt, one of the best shows you’ll see all year, and one I won’t soon forget!