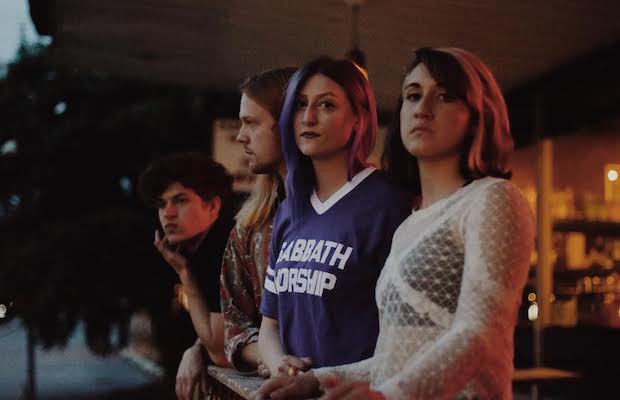 Buzzy local group Oginalii have seen their sound evolve from the stripped-down acoustic stylings of frontperson Emma Hoeflinger back in the project’s earliest days in 2013, to a hard to pin down, sludgy, hazy, psych-tinged, hard-hitting, genre and era spanning flavor of rock and roll across two EPs and a handful of songs, earning them a reputation as one of Nashville’s most essential underground rock fixtures. Filled out by guitarist Ryan Quarles, drummer Simon Knudtson, and bassist Emma Lambiase, Oginalii have, in recent years, become a breakout live staple both around down and beyond, and are gearing up in just a couple weeks to hit the road for a quick trek with rising WV outfit Hello June, before heading to SXSW in March.

Ahead of their new album, Cause and Affection, an electrifying, dynamic artistic leap forward for the band, co-produced by All Them Witches’ Ben McLeod and set to arrive April 5, it feels fitting that we exclusively premiere two special new tunes, “No Littering” and “Static,” which were recorded live and stripped down at OOKO Studio, channeling the more intimate vibe of the group’s acoustic beginnings (before they reappear on the album in all of their electric, face-melting glory). In their deconstructed format, the songs really showcase Hoeflinger’s powerful and earnest vocal delivery, and expert ability to craft nuanced and layered tunes at their core, weaving between genre conventions and building to soaring, gut-punching sonic highs.

Hear both “No Littering” and “Static” below, look out for more from Oginalii as they gear up to release their album this spring, and see them live both March 8 at The 5 Spot for Cold Lunch Recordings’ SXSW send off, then April 5 at The Basement for their album release show, along with Lacquer and Idle Bloom (tickets here)!

[NO COUNTRY PREMIERE] Hari The Band Unveil New Single "Numb" | See Them Saturday at The 5 Spot!