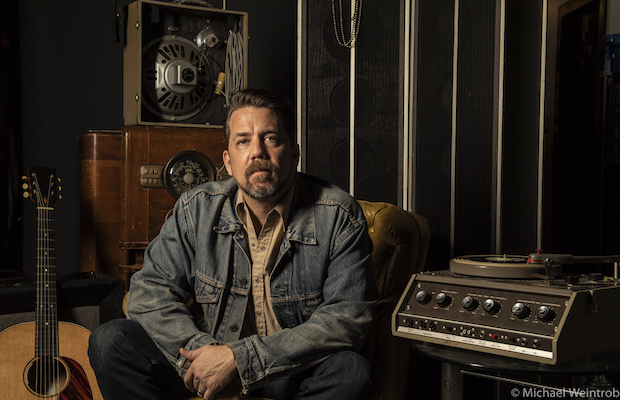 Blog favorite and general all-around badass Patrick Sweany has announced his sixth LP, Ancient Noise, which is set to drop via Nine Mile Records on May 11. A followup to Sweany’s excellent 2015 release Daytime Turned to Nighttime, our early listen to the record reflects on the singer’s continued maturation, not only as a musician, but as a man. Today, as we premiere new single “Get Along,” you can hear a bit of this growth, and we also hear a cooler, groovier side to Sweany. Patrick pulled in some talent to back him on this record, including sought after drummer Ken Coomer, all-star bassist Ted Pecchio, and soul legend and Hi Rhythm Section keyboardist Charles Hodges. Throw in some background vocalists, and a surely magical time recording at Sam Phillips in Memphis, and the song really seems to take on a new life.

We asked Patrick about the new single, and he described it as “my grown folks love song.”  He continues, “Puppy love and the excitement that comes with new relationships seem to be what a majority of love songs you hear are about. Cheating songs are a different thing entirely. Where are the ‘holding on together’ anthems that deal with romantic love? You hear that type of sentiment, to a much lesser degree, in a ‘fellow man’ sense, but puppy love or lust is what we hear the most.”

Continuing on this refreshing grown folks’ logic, Sweany continues, “You never hear about the struggles of two people who love each other above all else, for a long time. Working it out, staying in love with that person, holding on, and keeping a relationship from falling apart due to neglect. I wanted to write a kind of sexy groover that celebrates the real thing, the thing that you’re aiming for when you figure out you REALLY love somebody. I wanted to celebrate those people who do what it takes to keep that good thing going, until the end. I just wanted to shine some light on that.”

Head below to listen to “Get Along,” and mark your calendar for his local album release show at The Basement on May 26.  While you’re at it, hit Patrick up on Twitter to wish the April 26 born Taurus a Happy Birthday!