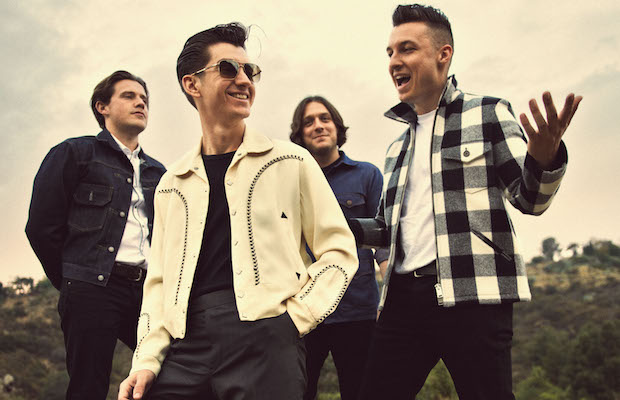 English indie rockers Arctic Monkeys have slowly been springing back to life over the past year, ending a brief hiatus following their 2013 fifth effort AM and subsequent tour, to focus on personal lives and side projects, including the sophomore effort from Alex Turner’s pop-geared endeavor The Last Shadow Puppets. As they gear up to release their as-yet-untitled and undated new LP (we suspect that status will change very soon), which was recorded last year under the radar, the band have given us the one bit of new information they are willing to provide: a list of tour dates and festival appearances. A brief North American trek, the group’s first since 2014, brings them back to Nashville on June 18, for a performance at Ascend Amphitheater. By then, we’ll surely know more about their latest record, if not already have it our hands, but for now, you can grab tickets right here before they inevitably sell out. Or, if you’d rather take a gamble, we’re also giving away a pair of tickets to one lucky fan; find out more about the show and enter for a chance to win below!

Formed in 2002 in Sheffield, England during their teens, Arctic Monkeys appeared on the scene as the garage rock revival of the early aughts was giving way to the blog-fueled indie rock explosion of the latter part of the decade, earning immediate acclaim and breakout worldwide attention for their stunning 2006 debut album, Whatever People Say I Am, That’s Why I’m Not. Promptly dubbed England’s next great rock act (with Brit Awards, Grammy nominations, and the fastest selling debut in U.K. history, they earned the pedigree to back up the hype), the band had grown to certifiable phenomenon by their 2007 sophomore effort, Favourite Worst Nightmare, again a smash hit, and that same year headlined Glastonbury for the first time. Ensuing years would see countless other festival appearances, and with subsequent releases, 2009’s Humbug, 2011’s Suck It And See, and 2013’s AM, the group managed to build on their indie, garage, and post-punk revival sound while maturing in focus, broadening their influence, and exploring beyond frontman Alex Turner’s signature early fast, supremely English delivery. Their superstar status may have cooled a bit in recent years (at least stateside, as has indie rock as whole), but after a four year absence from performing, and five since new music, the band, newly refreshed and readying new music, feel perfectly primed for a comeback. Their last Nashville show was a rowdy intimate affair at Marathon Music Works, but Ascend feels like a more appropriate space for this highly-anticipated comeback. You don’t want to miss it!

Winner will be announced Tuesday, April 3 at 5 p.m. CDT, and will receive one pair of tickets. Good luck!